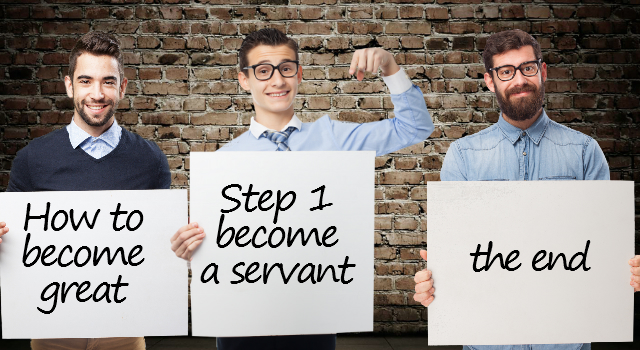 They left that place and passed through Galilee. Jesus did not want anyone to know where they were, because he was teaching his disciples. He said to them, “The Son of Man is going to be delivered into the hands of men. They will kill him, and after three days he will rise.” But they did not understand what he meant and were afraid to ask him about it.

They came to Capernaum. When he was in the house, he asked them, “What were you arguing about on the road?” But they kept quiet because on the way they had argued about who was the greatest.

Sitting down, Jesus called the Twelve and said, “Anyone who wants to be first must be the very last, and the servant of all.”

The frequency of Christ’s warnings increased as His death drew closer. This was not the first time Jesus spoke of His death. Yet, the disciples still did not understand. That is a testament to the strength of their Messianic presumptions.

Their preconceived opinions darkened their minds. Regardless of the brightness of the light, they did not see. The disciples imagined Christ’s kingdom would be prosperous and glorious. We too ignore Christ’s teaching. The world hates us. It hates Christians because the world hates Christ. (John 15:18-27) Yet many false teachers tell us, if we follow Christ we will be prosperous. They say, God, will provide all your desires if you are faithful.

Let us learn from the disciples’ mistake. We must be aware that we too have desires and preconceived assumption. We must not let them prevent us from understanding what God actually says. Let us read, study and learn from the whole counsel of God.

Christ words were not spoken in vain. The disciples recalled His words after His death and resurrection. God’s words are never spoken in vain. They always accomplish their purpose. Christ taught His life was not take. Rather, He offered it. He gave His life for us. The disciples learned that from Jesus teaching, but not at that time. They learned the lesson when they remembered Jesus’ teaching after the resurrection.

This was for the disciples alone. It was not for everyone. Christ does not reveal Himself to the world. Christ reveals Himself only to those He has chosen. And here the disciples were the ones He chose.

If He has revealed Himself to you, praise Him for His graciousness. If He has not, pray to Him and ask that He will.

The disciples did not understand what Christ was teaching. How little did they understand? They were arguing about who was doing to be the greatest in the Kingdom. They believed Christ would establish a kingdom they would help rule. They believed each would play a role. But who would play the most important role? They miss the fact the Christ was going to die.

Their understanding was so poor it appears they were not even listening. They did not understand. And they were afraid to ask Christ what He meant. So, they turned to their own wicked desires. We too have the tendency to ignore what we find uncomfortable. We replace it with more pleasant thoughts.

Many err in much the same way. We imagine ourselves better than we ought. We imagine a time when we will be with Christ in heaven. We ignore or minimize the work we are to do here in this life. We think it unimportant. We seek to honor ourselves rather than Christ. We steal from our employer by not providing our best work. We steal from our customers by not providing the best possible service and/or products. We have our heads in the cloud imagining heaven and not serving Christ here and now. How do we serve Christ? We serve Christ by serving others. (Matthew 22:36-38)

Christ commands us to walk on the earth. Those who focus on future things retard their progress towards heaven. Just as the disciples’ selfish ambition kept them from what they desired.

Jesus asked what they were talking about. (As if He did not know.) They remained silent. Jesus caught them in their sin. They were ashamed and did not answer.

At that time, in that society, glory, and honor were important. They played significant roles in society. Jesus brought a revolutionary way of thinking. He did so without destroying the fabric of society.

Christ said, “Anyone who wants to be first must be the very last, and the servant of all.” Jesus did not attack leadership or those in authority. He showed how those in authority were to exercise their authority. They were to exercise it as a servant to all. Jesus exemplified this principle. He “came not to be served but to serve, and to give his life as a ransom for many” (Matthew 20:28; Mark 10:45)

To illustrate His point Jesus held up a little child. Children were very insignificant in ancient culture. So, the child made the perfect object lesson.

The foolish extend Jesus’ statement. They claim we must be like little children and read into Christ words. Children have many faults. The context is clear. Jesus’ intended to point out how we are to regard importance. We are to be servants. He was not teaching us to behave like children.

Paul tells us to be children, not in understanding, but in malice, (1 Corinthians 14:20). In Ephesians 4:13 Paul tells us to become mature. The lesson Christ teaches here is we are not to consider ourselves important.

Christ is not teaching we are to embrace our inner child. Self-affirmations are contrary to God’s word. We are sinners. We deserve the wrath of God. (Romans 3:9-20) Yet we receive His mercy through Christ’s atoning death on the cross.

James warns not to show favor to those in power. We are to treat everyone as brothers and sisters. We are to be servants to everyone. When we serve others, we serve Christ.