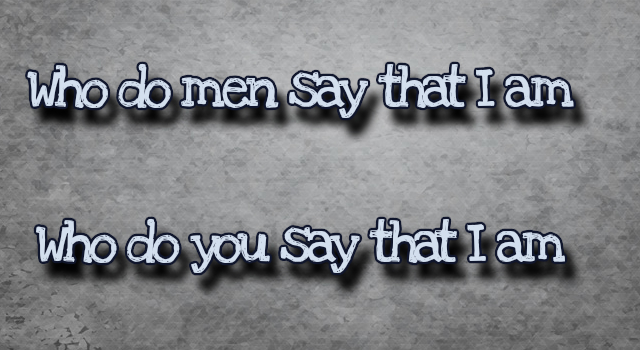 And Jesus went on with his disciples to the villages of Caesarea Philippi. And on the way, he asked his disciples, “Who do people say that I am?” And they told him, “John the Baptist; and others say Elijah; and others, one of the prophets.” And he asked them, “But who do you say that I am?” Peter answered him, “You are the Christ.” And he strictly charged them to tell no one about him.

And he began to teach them that the Son of Man must suffer many things and be rejected by the elders and the chief priests and the scribes and be killed, and after three days rise again. And he said this plainly. And Peter took him aside and began to rebuke him. But turning and seeing his disciples, he rebuked Peter and said, “Get behind me, Satan! For you are not setting your mind on the things of God, but on the things of man.”

And calling the crowd to him with his disciples, he said to them, “If anyone would come after me, let him deny himself and take up his cross and follow me. For whoever would save his life will lose it, but whoever loses his life for my sake and the gospel’s will save it. For what does it profit a man to gain the whole world and forfeit his soul? For what can a man give in return for his soul? For whoever is ashamed of me and of my words in this adulterous and sinful generation, of him will the Son of Man also be ashamed when he comes in the glory of his Father with the holy angels.”

And he said to them, “Truly, I say to you, there are some standing here who will not taste death until they see the kingdom of God after it has come with power.”

Jesus along with His disciples went to Caesarea Philippi. Caesarea Philippi was a town at the foot of Mount Hermon. It was close to the source of the Jordan river. Herod the Great built a temple to Caesar Augustus there. His son Philip changed the town’s name from Paneas to Caesarea. People of the time referred to it as Philip’s Caesarea. This distinguished it from the other Caesarea, a Mediterranean port.

Mark says that this conversation took place during the journey to Caesarea Philippi. Luke says that it took place while Jesus was praying. Matthew does not give details about the time. There is no contradiction between them. It is possible that Christ stopped at a certain place to pray. Then He may have asked the disciples the question.

Why did He ask the question? Was it idle curiosity? Did He not know? He was God incarnate. How could He not know?

He did not ask the question for His benefit. He asked it for His disciples’ benefit.

Christ wanted to firm up His disciples’ faith. He used a common teaching technique. He asked a question. A teacher does not ask questions because he does not know the answers. The teacher asks questions to help the student think through the answer. In other words, the question is for the benefit of the student, not the teacher. “Who do others say I am? Who do you say I am?”

The disciples said there was no consensus. Some people said Jesus was John the Baptist. Some said, Elijah. Others said a prophet. The disciples did not mention those who opposed Jesus. They mentioned groups that, for the most part, were Jesus supporters. They spoke of Christ with respect. Yet, those people missed who He was.

Many today speak of Christ with respect. But they fail to recognize who He is. Missing the real Christ, they miss the blessings He offers.

The Jews knew the Christ would come. They knew this from the law and the prophets. Satan was unable to convince them the Christ would not come. So Satan changed their expectation. Satan changed the Christ they expected. He emphasized one aspect over another. Then he created many false Christs. This caused the Jews to lose sight of the true Christ. Then He attacked the true Christ. He accused Him of being something that He was not. He slandered Christ’s character.

Let Christ’s question continue to ring in our ears. “But who do you say that I am?” Let us not fall into the majority report of our culture. Let us not deny the true Christ.

Peter answered for the rest of the disciples. He said, “You are the Christ.” Other than in the title, (Mark 1:1), this is the first time the name “Christ” appears in Mark.

Peter had not yet come to a full understanding. Yet he confessed the dignity of Christ. He knew Jesus came from God. He knew Jesus was not like other men. He knew the Father filled Jesus’ flesh with His Spirit.

Jesus told His disciples not to tell anyone. This may seem a strange command. Why would Jesus not want people to know? The popular notion was the Messiah was a political Messiah. Jesus refused to allow this popular notion to compromise His true calling. He was to be a suffering Messiah. His work was the moral and spiritual work of redemption.

The time to reveal His nature and mission would come later. Everything in its proper time.

This marks a turning point in Mark’s narrative. There are three predictions of Christ’s passion form Mark 8:27 to Mark 19:52. (Mark 8:31; 9:31; 10:33). These predictions form the structure of the section, its content, and mood. It talks about Jesus’ suffering, death, and the meaning of genuine discipleship. The mood is somber.

Mark records both Jesus’ teaching about his death and the disciples’ misunderstanding. Jesus explained what genuine discipleship is all about. It is about denying oneself (Mark 8:34-38). It is about humility and serving (Mark 9:33-37). It is about suffering, humble service, and not lording over people (Mark 10:35-45).

Jesus’ usual mode of teaching was with parables. But here Mark says Jesus taught the fact he would suffer and die in plain unambiguous language. Parables were difficult to understand. As a result. the disciples would often ask Jesus what a parable was teaching. But here He wanted no confusion. He wanted them to understand. He was going to die. His Death would not be a glorious, honorable death. His death would be an ignominious death.

The popular notion was of the Messiah was political. This is what the rabbis taught. This is what all the elders and scribes taught. It is easy to understand Peter’s denial of Jesus teaching here. We may understand but it is not excused. What does Jesus call Peter for his insistence on a political messiah? Satan!

Satan was at work even among the disciples. It was not only Judas but Peter whom Satan influenced. It should not surprise us to see Satan at work in the church.

When we teach anything other than the cross, we are the embodiment of Satan. Listen to this coming Sunday’s sermon. Is it about Christ crucified for the forgiveness of sin? Or does it give principles for happiness? Are the sermons about raising children and having a happy marriage? Or maybe the sermon is about service. None of these are bad in themselves. But they are satanic when they take the place of Christ and the gospel.

What were Peter’s intentions? They were honorable. His intention was to care for his Lord. He wanted what was right. We see this again in the garden when Peter attacks a servant of the high priest. There too Jesus admonishes Peter. He cared about the things of man not the things of God.

Jesus called over to the crowd. He said, “If anyone would come after me, let him deny himself and take up his cross and follow me.” These words are in a direct rebuke of Peter’s false view. The Christ was to die. The Christ was to suffer. Then He invites them to imitate Him. No one can be Christ’s disciple unless they imitate Him.

Christ outlined two points in what it means to follow Him. These are self-denial and a voluntary bearing of the cross. The force of the Greek may be better understood with, “He must deny himself…” Rather than “Let him deny himself…” In other words, this is not optional.

No one can be Christ’s disciple unless they are willing to suffer and die. Those who teach health, wealth and happiness for true believers teach a false Christ. They teach a false religion. They imitate Peter not Christ. Christ calls them Satan.

What does it mean to take up your cross? The Romans required condemned men to carry the crossbar of their cross to the site of execution. The image “pick up your cross.” would bring to mind execution. We are to go as willing participants to our execution.

Jesus said, “whoever wants to save his life will lose it.” He emphasized coming to Him meant rejection by the world. But, the desire for self-preservation ought to drive us to Christ. Men are so attached to the day to day concerns that they forget why they were born. They forget God gave them an immortal soul so they could live forever with Him in heaven.

Christ asked a very pertinent question. “For what does it profit a man to gain the whole world and forfeit his soul? For what can a man give in return for his soul?” What value is there in gaining all the wealth in the world, if you die in the process? What value do you place on your life?

Christ reflects our response to His teaching to the Father. If we are ashamed of Christ, He is ashamed of us.

Jesus tells them some of them will experience the Kingdom of God before they experience death. Many have had problems with this verse because they believe it is a reference to Christ’s second coming. That is not what is in view here.

What does the phrase, “the kingdom of God come with power,” mean? There are several suggestions. (1) the transfiguration itself, which immediately follows; (2) Jesus’ resurrection and ascension; (3) the coming of the Spirit; (4) Jesus’ second coming and the establishment of the kingdom.

Mark’s reference in verse two to “after six days” would suggest Mark had the transfiguration in mind.