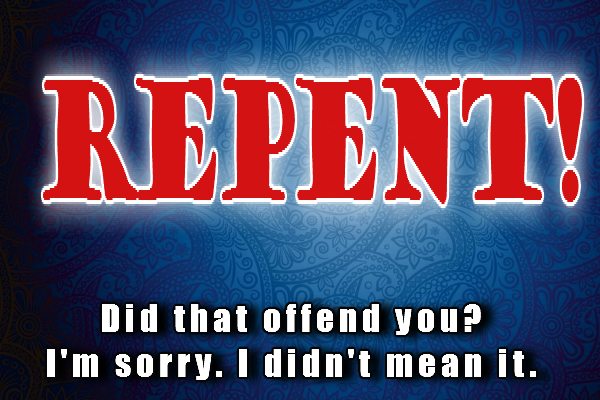 King Herod heard of it, for Jesus’ name had become known. Some said, “John the Baptist has been raised from the dead. That is why these miraculous powers are at work in him.” But others said, “He is Elijah.” And others said, “He is a prophet, like one of the prophets of old.” But when Herod heard of it, he said, “John, whom I beheaded, has been raised.” For it was Herod who had sent and seized John and bound him in prison for the sake of Herodias, his brother Philip’s wife because he had married her. For John had been saying to Herod, “It is not lawful for you to have your brother’s wife.” And Herodias had a grudge against him and wanted to put him to death. But she could not, for Herod feared John, knowing that he was a righteous and holy man, and he kept him safe. When he heard him, he was greatly perplexed, and yet he heard him gladly.

But an opportunity came when Herod on his birthday gave a banquet for his nobles and military commanders and the leading men of Galilee. For when Herodias’s daughter came in and danced, she pleased Herod and his guests. And the king said to the girl, “Ask me for whatever you wish, and I will give it to you.” And he vowed to her, “Whatever you ask me, I will give you, up to half of my kingdom.” And she went out and said to her mother, “For what should I ask?” And she said, “The head of John the Baptist.” And she came in immediately with haste to the king and asked, saying, “I want you to give me at once the head of John the Baptist on a platter.” And the king was exceedingly sorry, but because of his oaths and his guests, he did not want to break his word to her. And immediately the king sent an executioner with orders to bring John’s head. He went and beheaded him in the prison and brought his head on a platter and gave it to the girl, and the girl gave it to her mother. When his disciples heard of it, they came and took his body and laid it in a tomb.

Mark tells us this story for several reasons. First, we learn people knew about Jesus. People were talking about Him. His fame had spread to Herod’s palace. So men were without excuse. People, all the way to Herod, knew of the signs and wonders showing Jesus was the Christ. Second, it shows the boldness of men of God. Third, it shows John had done what he came to do. He had prepared the road for the Messiah. He preached repentance to all men.

Herod had John the Baptist beheaded. Why? He knew John was a righteous man. He did it because he was proud. He made a rash statement. Rather than suffer the embarrassment of reneging on a promise he killed an innocent man.

John was a pain in Herod’s side. John, in public and in a loud clear voice, told Herod he was living in sin. Herod was violating God’s law. He was not to marry his brother’s wife. To silence John, Herod had him put into prison.

Today we would see John as the villain. People would not condemn Herod. They would condemn John

“That is between Herod and Herodias.” “You seem awful judgmental John.” “Judge not that you be not judged.” “Let God work it out.” “John you are not loving.” “Remember you attract more flies with honey than you do with vinegar.” “You need to talk to Herod in private.” “John, that is your opinion.” “They love each other. Who are you to stand in the way of love?” “John, you are applying old out of date ideas. You need to come into the first century.”

Today, the condemnation of sin is a sin. We justify all sins. We may justify our sin but it is still sin. Sin is not based on opinion. Sin is not subjective. Sin is not relative. Sin is objective. It is the violation of, or nonconformity to, the law of God. The fact that we all sin does not justify sin. And we must all repent. There is none righteous, no not one. (Romans 3:10) We are to call each other to repentance.

A guilty conscience torments us. When we know we have done wrong, it haunts us. Herod knew killing John was wrong. Yet he did it. And His conscience haunted him.

Understanding your sin, your guilt, can drive you to despair. To handle that guilt we either convince ourselves it was not that bad. Or we ignore it until it goes away. Yet, we remain guilty until God’s grace drives us to repentance.

Herod understood his guilt. And it drove him to despair. Herod knew he had committed a great evil. The guilt haunted him.

Herod heard of Jesus. He heard of Jesus healing the sick. He heard of the miracles. Herod thought Jesus was John the Baptist. “John has come back to haunt and torment me.” We all think like Herod. It is all about us. Herod thought, “John came to haunt me.” When we go through difficulty, we think, “God is punishing me for this or that.” Or, “God is trying to teach me something.”

I hate to break it to you, but it is not all about you. When we think like that we are egotistical. It is never about you. It is always about God and His glory. Jesus miracles were about Him. They were to bring Him glory. It had nothing to do with Herod. But Herod in his self-centered mind thought it was all about him.

Herod stole his brother’s wife. Stealing his brother’s wife was no doubt sinful. It was evil. Others had seen the sin. Yet they held their piece. John came along and rebuked Herod to His face. We see here how God arms his servants with unshakable resolve.

We also get an insight into Herodias. She was the embodiment of evil. She lay in wait for John. She was a vindictive woman. She would let no one get in her way. John condemned her marriage to the king. And Herod was hearing what John was saying. “When he heard him, he was greatly perplexed, and yet he heard him gladly.”(v20b)

If John convinced Herod the marriage was illegal, he would dissolve the marriage. She would be a woman without power. She would have to go back to her true husband. And he was not the king. That would not do. For Herodias, John must die.

Herod’s birthday gave her, her opportunity.

Herod intended to provide rich entertainment for his guests. So he allowed his wife’s daughter to dance. Dancing was not uncommon. Nor was there anything inappropriate about dancing. But for a marriageable young woman to dance was a shameful display.

Yet Herodias molded her daughter in her image. Her daughter was to dance in a manner to excite and arouse the guests.

Herod, loss of judgment from wine, made rash promises to a young dancing girl. The result was a righteous man died.

Do not let the prosperity preachers like Joel Osteen, Steven Furtick and the like lead you astray. When you present the word of God you will suffer. Our best life is not now. God promises our best life once we are with Christ.