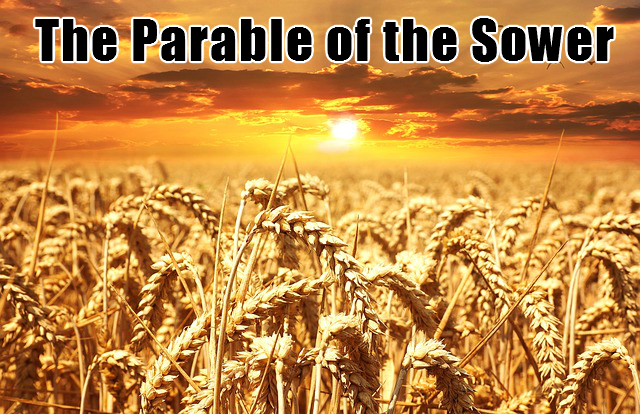 Again he began to teach beside the sea. And a very large crowd gathered about him so that he got into a boat and sat in it on the sea, and the whole crowd was beside the sea on the land. And he was teaching them many things in parables, and in his teaching, he said to them: “Listen! Behold, a sower went out to sow. And as he sowed, some seed fell along the path, and the birds came and devoured it. Other seed fell on rocky ground, where it did not have much soil, and immediately it sprang up since it had no depth of soil. And when the sun rose, it was scorched, and since it had no root, it withered away Other seed fell among thorns, and the thorns grew up and choked it, and it yielded no grain. And other seeds fell into good soil and produced grain, growing up and increasing and yielding thirty fold and sixty fold and a hundred fold.” And he said, “He who has ears to hear, let him hear.”

And when he was alone, those around him with the twelve asked him about the parables. And he said to them, “To you has been given the secret of the kingdom of God, but for those outside everything is in parables, so that

“‘they may indeed see but not perceive,
and may indeed hear but not understand,
lest they should turn and be forgiven.’”

And he said to them, “Do you not understand this parable? How then will you understand all the parables? The sower sows the word. And these are the ones along the path, where the word is sown: when they hear, Satan immediately comes and takes away the word that is sown in them. And these are the ones sown on rocky ground: the ones who, when they hear the word, immediately receive it with joy. And they have no root in themselves, but endure for a while; then, when tribulation or persecution arises on account of the word, immediately they fall away And others are the ones sown among thorns. They are those who hear the word, but the cares of the world and the deceitfulness of riches and the desires for other things enter in and choke the word, and it proves unfruitful. But those that were sown on the good soil are the ones who hear the word and accept it and bear fruit, thirty fold and sixty fold and a hundred fold.”

Mark tells us Jesus taught many things in parables. In eastern culture this was normal. A parable is a short story to teach a particular truth or principle.  A parable’s intent is to teach one thing. Extrapolating it beyond its point is flirting with trouble.

“they may indeed see but not perceive, and may indeed hear but not understand, lest they should turn and be forgiven.”

Jesus used parables to conceal not reveal. Jesus was teaching them about God’s effective call. God hides His revealed truth from those He has not called.

The seeds were not planted in rows. They scattered the seeds in a haphazard manner. This process allowed Birds to eat the seeds. And the seeds fall in locations where the soil was not good. The farmer would not know the condition of the soil until he plowed it. Seeds fell places where they could not grow. Paths and thorny areas had seed plowed into them. Rocky areas only became visible after plowing.

The same gospel is sown everywhere. But it does not have the same effect everywhere. The fault is not in God. The fault lies in man. God calls all to repentance. But not all respond.

Jesus revealed the Gospel to the Disciples. But He obscured the message from those outside the Kingdom. They saw it as a riddle. To them, Jesus would remain an enigma.

Before explaining the parable Jesus made a statement which is hard to understand. He states in clear unambiguous terms why He speaks in parables. So that, “They may indeed see but not perceive, and may indeed hear but not understand, lest they should turn and be forgiven.”

The word is available to all. But God’s word will not take root until He softens our heart, removes the thorns and rocks.

Those who have ears to hear, let them hear.