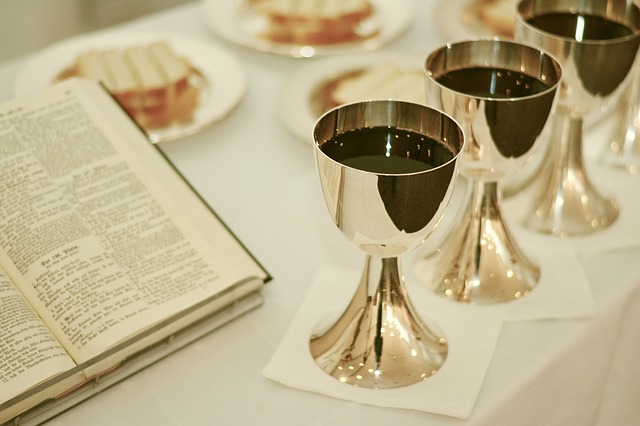 And as they were eating, he took bread, and after blessing it broke it and gave it to them, and said, “Take; this is my body.” And he took a cup, and when he had given thanks he gave it to them, and they all drank of it. And he said to them, “This is my blood of the covenant, which is poured out for many. Truly, I say to you, I will not drink again of the fruit of the vine until that day when I drink it new in the kingdom of God.”

The disciples were eating. It was near the end of the meal. While they were eating Jesus established a new covenant. This is a point that some miss today even though it is clear in Scripture. It was not missed in the early church.

Paul makes this clear in the letter to the Galatians. “I am astonished that you are so quickly deserting him who called you in the grace of Christ and are turning to a different gospel— not that there is another one, but there are some who trouble you and want to distort the gospel of Christ.” (Galatians 1:6-7)

The sacramental meal of the new covenant grows out of the old covenant. It started as the Passover feast. It became the Lord’s supper. Christ took the bread and invited His disciples to take part in a new supper.

Christ followed the customs of the day in celebrating the feast. But He used it to draw the minds of His disciples to something else. He used the bread for a different purpose. Christ abolished the symbols of the Law and instituted a new Sacrament.

Mark and Mathew say Jesus blessed the bread. Luke uses a different word. Luke says Jesus gave thanks for the bread. This is a common way of speaking. Before we eat we say “the blessing”. We say “grace”. We “give thanks”. We bless our food before the meal. We do not believe something happened to it because we blessed it. We consecrate it to the work of God. It enters our bodies. Our body takes the nourishment from the food and does God’s will.

This is not transubstantiation as Rome claims occurred. Transubstantiation is where the bread and wine become the body and blood of Christ. This is clear from the different words used by Luke and Matthew and Mark.

There are those who claim the Lord’s Supper is only a memorial. When we celebrate the Lord’s supper we only remember the Lord’s death. It is more than a way of remembering. It is a way God bestows grace on us.

The reason this is so horrific is they blaspheme God. God, not man, offered the sacrifice. Second, Christ’s death was once and for all. “He has no need, like those high priests, to offer sacrifices daily, first for his own sins and then for those of the people, since he did this once for all when he offered up himself.” Hebrews 7:27 “For the death, he died he died to sin, once for all, but the life he lives he lives to God. (Romans 6:10)

Jesus consecrated the bread. It became the symbol of the flesh of Christ. But it is not only a symbol. It is much more. We must understand the word consecrated in a proper sense. The bread nourishes the body. But Christ used it for a different purpose. It now nourishes the spirit. It becomes spiritual food.

The bread does not become nourishment of the spirit by uttering magic words. It nourishes the soul through faith.

In short, Jesus consecrated the bread and wine as a testimony. The Lord used physical and corruptible objects for spiritual purposes. This takes place when we hear and understand His commands and promises. The words a Roman Priest whispers are a wicked profanation of this mystery. In the same way, the denial of the efficacy of the bread and wine deny the grace bestowed by God.

Christ declared that the bread was his body. These words relate to a sacrament. A sacrament consists of a visible sign. A sacrament connects a thing to what it signifies. That thing is the true reality.

By saying the bread and wine are symbols. Rome claims we deny the Scripture. That seems a strange stance. If the principle is, a sacrament is what it represents, then all sacraments are what they represent. You cannot pick and choose. Scripture calls Baptism the washing of regeneration, (Titus 3:5;). The rock in the wilderness was Christ, (1 Corinthians 10:4;). It calls a dove the Holy Spirit, (John 1:32;).

The signs receive the name of the thing which they represent. Those who claim to venerate the Lord’s words do not apply a consistent use across all the sacraments?

Augustine and even earlier church fathers said spiritual things are given signs. They agreed when the Scripture speaks of the sacraments we are to understand them as signs. There is no reason this sacrament should violate that rule. Christ called the bread His body because it symbolizes His body.

The blood of the lamb protected Israel from death in the original Passover. Christ’s blood, the blood of the new covenant protect us from death. The phrase “blood of the covenant” comes from Exodus. 24:8. Biblical covenants are sealed in blood.

Right after offering the cup Jesus said He would not drink wine again until He drank it in the Kingdom of God. Jesus was not saying He would refrain from drinking wine. He was stating how impending His death was.