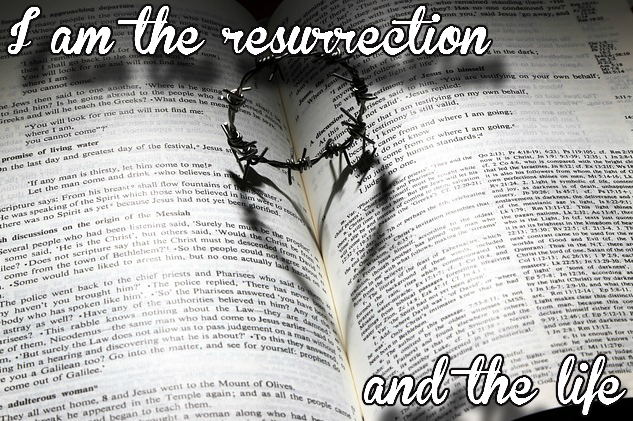 Then the Sadducees, who say there is no resurrection, came to him with a question. “Teacher,” they said, “Moses wrote for us that if a man’s brother dies and leaves a wife but no children, the man must marry the widow and raise up offspring for his brother. Now there were seven brothers. The first one married and died without leaving any children. The second one married the widow, but he also died, leaving no child. It was the same with the third. In fact, none of the seven left any children. Last of all, the woman died too. At the resurrection whose wife will she be, since the seven were married to her?”

Jesus replied, “Are you not in error because you do not know the Scriptures or the power of God? When the dead rise, they will neither marry nor be given in marriage; they will be like the angels in heaven. Now about the dead rising—have you not read in the Book of Moses, in the account of the burning bush, how God said to him, ‘I am the God of Abraham, the God of Isaac, and the God of Jacob’? He is not the God of the dead, but of the living. You are badly mistaken!”

At that time the Sadducees controlled the official political structures. They were the majority members of the Sanhedrin. The high-priestly families were Sadducees. The Sadducees were very strict on law and order issues.

They believed the resurrection violated the rules of logic. They thought it contradicted the Mosaic laws. Here they give an example.

They base the story on the “kinsman-redeemer” law in Deuteronomy 25:5-10. This law provided the perpetuation of the family. It also provided for a widow. Children cared for their parents. Widows were vulnerable. Without children, a woman could only beg.

Their goal was the same as the Pharisees. The Pharisees tried to trap Jesus with treason against Rome or Israel. Here the Sadducees come with another type of trap. They thought they with this question Jesus must deny either scripture or logic.

The Sadducees started by invoking Moses. They wanted to establish the marriages were lawful. They assumed if there is a resurrection, God will restore everything. Everything includes giving back all He given before. God gives the gift of marriage. He gives wives to husbands and husbands to wives. This was the error they made. In the resurrection, there is no marriage. In the resurrection things will not be as before nor should we expect them to be the same. Much will be different. There will be no sin. That changes everything.

Jesus’ response was simple and straightforward. Y’all don’t know how to read. The answer is in the scripture.

Christ said we will be like angels after the resurrection. Many have abused this passage. They claim Jesus said we will be angels. They ignore the context. We must not ignore the context. In context, Jesus is talking about marriage after the resurrection. Christ is correcting an error. Christ does not say we will become angels. He does not say we will be like angels in all respects. He says we will not marry as angels do not marry.

Jesus goes one step further to prove not only the resurrection but the immortality of the soul. He used a passage they were familiar with. (Exodus 3:6). God told Moses “I am” the God of Abraham. He did not say, “I was” the father of Abraham. So, Abraham and the fathers must be living.

Jesus ends the conversation with “You are badly mistaken!” This was not a small error. This was a huge error. Their error was, they pitted God’s revelation against itself. There violated the fundamental for exegesis. Scripture interprets scripture. God’s word never contradicts itself.

Mark reminds us through Christ’s words we have the hope of the resurrection. Come soon, Lord Jesus.