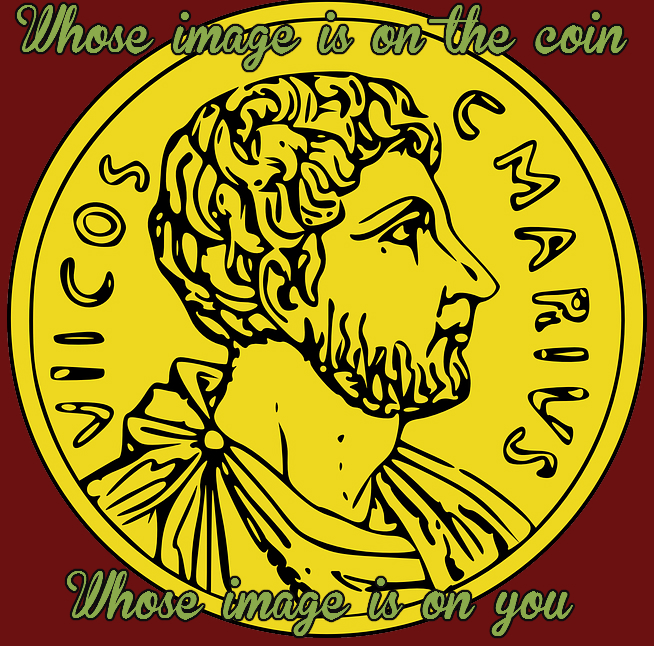 Later they sent some of the Pharisees and Herodians to Jesus to catch him in his words. They came to him and said, “Teacher, we know that you are a man of integrity. You aren’t swayed by others, because you pay no attention to who they are; but you teach the way of God in accordance with the truth. Is it right to pay the imperial tax to Caesar or not? Should we pay or shouldn’t we?”

But Jesus knew their hypocrisy. “Why are you trying to trap me?” he asked. “Bring me a denarius and let me look at it.” They brought the coin, and he asked them, “Whose image is this? And whose inscription?”

Then Jesus said to them, “Give back to Caesar what is Caesar’s and to God what is God’s.”

And they were amazed at him.

The Pharisees had failed at every attempt to trap Jesus. They could not arrest him because they feared the people. So the best way to get rid of Jesus was to have the Romans do it. They tried to set up Jesus in a moment of carelessness. All they needed was the appearance of opposition to Rome. If they could manufacture that, they could deliver Him to the Governor as a seditious person.

They laid out what they thought was as the perfect trap. Is it lawful to pay taxes to Caesar? That was a simple yes or no question.

At that time there was a hot debate rather or not it was right to pay Roman taxes. Many thought Rome was claiming a tribute that belonged to that God.

Jesus’ righteousness was well known. They knew Jesus would obey the Mosaic Law. They knew this because He used scripture every time they tried to trap Him. The Mosaic Law said Israel was to pay tribute to God. The thought was, if you paid tribute to Caesar, you could not pay tribute to God. So, the Pharisees knew Jesus would come down on the side of God. If Jesus said not to pay taxes. Rome would convict Him of sedition.

But if they were wrong that was fine too. The people would see Him as a traitor to His country. It would turn the people against Him. They feared a mass uprising if they arrested Jesus. But if Jesus lost popular support, that threat went away. This was the perfect plain. Or so they thought.

Mark says they sent some of the Pharisees and Herodians. Matthew says the Pharisees sent their disciples. There is no conflict. They wanted to take Jesus by surprise. So, they sent their young men. If the ones Jesus had dealt with before came, Jesus would know something was amiss. They did not want Him to see this coming. When they sprung the trap, the surprise would make it more delightful. So they sent people with whom he had not had prior dealing. Luke called them spies.

Herodians were apologists for Herod. Herod was a half-Jew. He was corrupted and professed the Law when it benefited Him. The Herodians were his flatterers. They gave excuses for Herod’s false doctrine. You can think of them as a political party today. If the president is in their party, no matter what he does, his party will defend him and deflect accusations. That was the Herodians.

By the way they set up the question you can tell what answer they wanted. They contrasted God’s Law with man’s law. They ask, “We should obey God, shouldn’t we?” They wanted Jesus to say God’s Law is supreme. So, the tribute belonged to God, not Caesar. If Jesus had said that their work was done. The Romans would have taken Him.

Jesus saw through their deceit. They had no desire to learn. Their question was not a sincere question. They presented a false dichotomy. To pay taxes to Cesar did not prohibit giving to God what was God’s.

Everyday wicked men try to snare righteous. They hide their malice. When we speak of God’s grace, love, wrath, justice, mercy. We must guard our words. They will use a careless word to misrepresent and blaspheme God.

Christ asked for a coin. They brought him one. Whose coin was it? The coin was a Roman coin. It belonged to Caesar. Roman allowed them to use it for commerce. They could tell the coin belonged to Caesar because His image was on it. If Caesar demanded they return the coin, they were to give it back. Give to Caesar that which belongs to Caesar.

But the lesson was not that it was OK to pay taxes. The lesson was we are to return what is not ours to the rightful owner. God made us in His image. He stamped his image on us. We belong to Him. We are not our own. We are to give to Him our whole self. We are to surrender ourselves to Him in total, all day, every day.