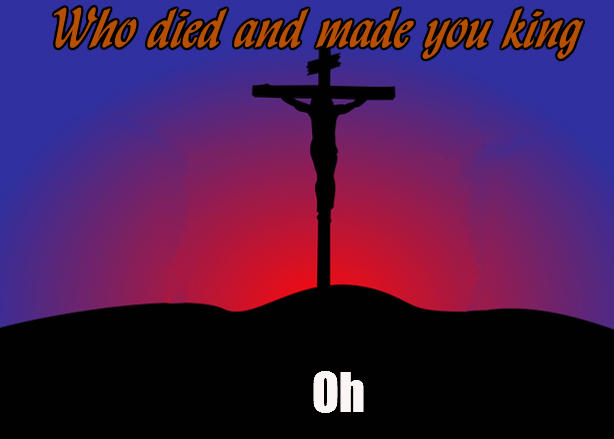 And they came again to Jerusalem. And as he was walking in the temple, the chief priests and the scribes and the elders came to him, and they said to him, “By what authority are you doing these things, or who gave you this authority to do them?” Jesus said to them, “I will ask you one question; answer me, and I will tell you by what authority I do these things. Was the baptism of John from heaven or from man? Answer me.” And they discussed it with one another, saying, “If we say, ‘From heaven,’ he will say, ‘Why then did you not believe him?’But shall we say, ‘From man’?”—they were afraid of the people, for they all held that John really was a prophet. So they answered Jesus, “We do not know.” And Jesus said to them, “Neither will I tell you by what authority I do these things.”

This passage occurs the day after Jesus threw the merchants and money changers out of the temple. The chief priests and scribes came up to Him and said, “Who do you think you are? Who gave you the right?”

They had tried to attack Christ with full frontal assaults and failed. Now they tried an indirect attack. “What is your authority?” They did not debate rather or not Christ’s action was correct. They had lost those battles before. Plus I am sure they knew Christ’s doctrine was correct.

This was their chance to expose Jesus as a usurper. He was not a priest. They were going to show once and for all He had no official status to act in the temple.

This time they had plausible grounds. No one is to dishonor the priesthood or prophetic office. We are to wait for God’s call. But they knew God anointed Christ. They were aware He healed the blind and lame. They were aware of He raised Lazarus from the dead. We need knowledge to believe. But knowledge alone will not save us.

They insisted Jesus was not a lawful minister. Why? They had not approved Him. As if their vote counted.

Jesus did not give them a direct answer. The reason is, they interrogated Him about things they already knew. Jesus silenced the officeholders and professional theologians. He undercuts the claims of such “official” authority to be absolute. Prophetic authority, by definition, does not have a human source (Galatians. 1:11,12). It comes from God. It demands submission.

Jesus’ question was not an attempt to catch the chief priests and scribes on the horns of a dilemma. John’s mission was to, prepare the way of the Lord. (Malachi 3:1; Luke 7:27.) But these rulers were unworthy of a Christ. They had despised a holy prophet of God. And their own reply convicted them.

John’s mission was to point to Christ. God sent John. John did not point to himself but to Christ. If John’s baptism was from heaven, they would understand the authority of Christ.

The chief priest knew the truth. If they admitted the truth, they condemned themselves. They believed two contradictory things. They believed they were God’s sole authority on earth. They believed Jesus had no legitimate authority. They knew Jesus did miraculous works. He did works that only God could do. They could not reconcile these beliefs so they went with, we don’t know.

Christ did not leave them without an answer. He gave an answer. The answer confounded them. John’s testimony proved that Jesus received His authority from heaven.

Jesus’ question revealed their wicked intentions. He revealed the motivation of the religious leaders. He exposed them for what they were — hypocrites. They indicted themselves when they cited only two options and chose neither of them (“We do not know”).

The point of the passage is this, no matter what Jesus said, they were not going to believe it.

Jesus gave an answer. He was clear. His authority came from heaven.