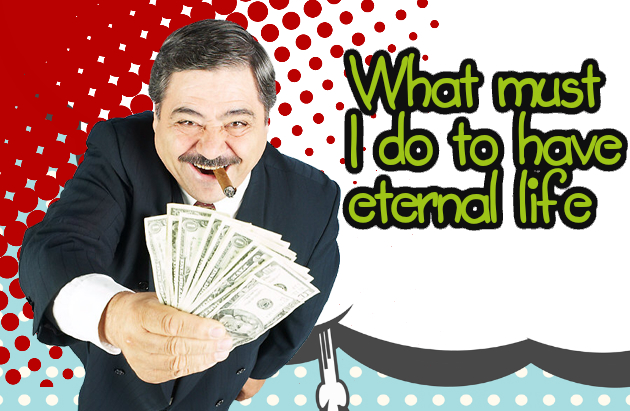 As Jesus started on his way, a man ran up to him and fell on his knees before him. “Good teacher,” he asked, “what must I do to inherit eternal life?”

“Teacher,” he declared, “all these I have kept since I was a boy.”

Jesus looked at him and loved him. “One thing you lack,” he said. “Go, sell everything you have and give to the poor, and you will have treasure in heaven. Then come, follow me.”

At this the man’s face fell. He went away sad, because he had great wealth.

Jesus looked around and said to his disciples, “How hard it is for the rich to enter the kingdom of God!”

The disciples were even more amazed, and said to each other, “Who then can be saved?”

Jesus looked at them and said, “With man this is impossible, but not with God; all things are possible with God.”

Then Peter spoke up, “We have left everything to follow you!”

“Truly I tell you,” Jesus replied, “no one who has left home or brothers or sisters or mother or father or children or fields for me and the gospel will fail to receive a hundred times as much in this present age: homes, brothers, sisters, mothers, children and fields—along with persecutions—and in the age to come eternal life. But many who are first will be last, and the last first.”

Read this passage again. Slow down and imagine you are there watching it happen. If you were one of the disciples what would you have thought? Who was this man? And why did he come? Why did he leave? What did Christ say? What did Christ not say?

These questions will help us understand the passage better.

Mark tells us a man ran up to Jesus and fell on his knees. This was not a casual encounter. The man came with sincerity.

Luke says the man was a ruler. He was a man of very high authority. This is a man of influence and power. Yet he comes and falls on his knees before Jesus.

He did not come as the scribes and Pharisees. He came out of a desire to receive instruction from Christ. Men thought well of him. In the eyes of men, he was an upright person. He also thought he was doing quite well. Many today are under the same delusion. They believe they are righteous. They have a false sense of goodness.

Jesus needed to stop him in his tracks. You cannot do anything. It is not earned. God does give it to the unworthy.

Jesus used what we would call a pattern interrupt. Jesus asked, “Why do you call me good.” There are two reasons Jesus did this. The first is to jar the man into realizing his assumptions were all wrong. The man’s focus was on himself. His focus needed to be on God. The second was to instruct the young man. The young man was to replace his poor assumptions with the gospel. Christ is God. If you call Christ good, then by necessity, you are calling Him God.

Many today will call Jesus a good teacher. If you think Christ nothing more than a man, you do not use the word “good” right. The term good belongs to God alone. Neither men nor angels deserve such honor. If you call Jesus good you acknowledge He is God.

By referring to the commandments, Christ was not teaching the law brought salvation. I have heard some preach there was a dispensation of law. If Israel would keep the law there would have been no need for a savior. But they did not. And that is why Christ came.

Any violation of the law makes you a sinner. Saying, “I will start obeying the law and that I will be saved is nonsense.” It is like saying, “I murdered someone. But that was a long time ago. I haven’t murdered anyone in a long time. So I am no longer a murderer.”

When the man came to Christ, he inquired about the righteousness of works. Christ taught him no one is righteous before God unless he has fulfilled the law. Once convinced of his own weakness then he might be open to the help of faith.

We are not saved by the law. But to obey Christ we obey the law. Christ commands us to do so.

Christ asks him what the law teaches. When Christ asks what the law requires He only refers to the second tablet. Observation of the first table is often faked by hypocrites. We can fool others and ourselves.

Jesus had finished teaching eternal life was not earned. We receive it. Yet, the man asked what he must “do.”

So Christ answers the man’s question by referring to the works of the Law. If Christ had commanded anything else He would have contradicted His own commands. We must obey the commandments. But we have not. We can not. But we can praise God! God imputes Christ righteousness to us. We have Christ’s righteousness added to our account. And He takes on our sin in His account. Woohoo!

When the man claimed he had kept the law since he was a child. Jesus looked at him and loved him. How was that possible? He was proud and a hypocrite. There is nothing is more hateful to God than those two. What the writer is communicating is Christ look at him and felt sorrow. He felt anguish. The man had deceived himself. He thought he was good. He still had no idea what goodness was.

Jesus continues His instruction. Christ said, Oh you have kept the law. Really? Let’s look at the one about idols. You are to worship no one and nothing but God. Your wealth is an idol. You have a false God. Get rid of your false God.

When Jesus told the man what to do. The man went away sorrowful. He could not leave his idol.

The same thing would happen to us, except for the grace of God. He is the one who makes us desire Christ over everything else.

The man walked away from Christ. Christ responded, “How hard it is for the rich to enter the kingdom of God!”

This serves to warn both rich and poor. It puts the rich on guard. It warns the poor not to covet that which brings damnation to their soul.

This amazed the disciples. Were not the rich blessed by God? Riches are a sign of God’s blessing. That is what they thought. That is what the prosperity gospel teaches. God wants you rich. What? Christ did not die to make us rich, at least rich in material things.

Understanding the disciples’ assumption it is easy to understand their astonishment. How can anyone make it into the kingdom if those God has blessed cannot make it?

What we see as impossible. God sees as no problem. All things are possible with God.

Many have made much over the “Eye of the Needle.” We refuse to submit to Christ’s teach. A camel is large and a needle is small, very small. It is impossible for a camel to go through the eye of a needle.

We try to make it not impossible, only difficult. Some claim the “Eye of the Needle” referred to be a small gate in Jerusalem. It opened after the main gate closed at night. To pass through the gate a camel could only pass through without baggage. And even then it still had to stoop to get through. It was difficult, but not impossible.

The problem is twofold. First, there is no accepted evidence for the existence of such a gate. Second, it conflicts with Christ’s statement about God doing what we see as impossible. Christ’s illustration would be God can to the difficult no the impossible.

Jesus was referring to the eye of a real needle. A camel passing through that is impossible! The suggestion that there was a small gate, called “the needle’s eye,” is unsupported. It also trivializes Jesus’ image.

Peter’s response is difficult for me to understand. I can read it two ways. The first is “We have left everything to follow you! Aren’t we good? We have earned our place. Our good works were works of leaving behind everything. We done good. Right, Jesus?”

In other words, you can read it as a proud statement.

The second ways you can read it is, “We have left everything to follow you! Do we get in? I mean, if God has rejected those He has blessed, is there any hope for us. We have nothing. We only have you.”

I tend towards the second understanding. It is more consistent with the rest of the narrative.

Christ consoles His disciples. He assures them that if all they have is Him they have everything else.

Jesus does not deny great rewards to those who follow him. He promises them both in the present age and in the age to come. But suffering is integral to the mission of the disciples and the church. In the next section (Mark10:32-34) Jesus reaffirmed his coming suffering.