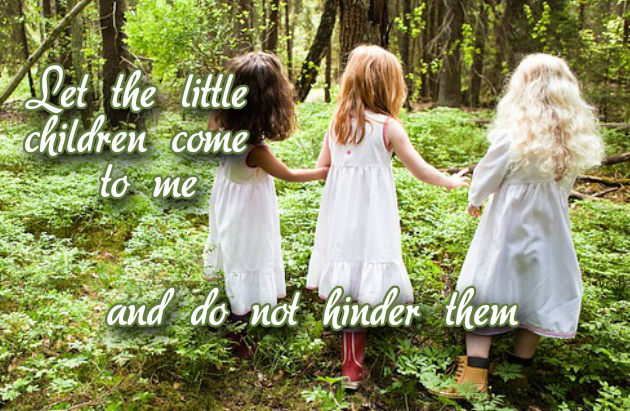 The parents were not aware of Christ loftiness. If there had been a crown on His head they would have hesitated. But, the disciples thought it was beneath Christ. The parents were not to trouble Christ with children. He had more important things. The disciples tried to honor Christ. But they robbed Him of His office, that is, to bless those who come to Him.

Many who claim the name of Christ do the same today. Rome declares we are to ask dead men to intercede to God for us. They rob Christ of His office of Intercessor and Mediator. Pentecostals rob God of glory. They claim to hear God’s voice. A voice that contradicts what God’s holy scripture. Synergists steal God’s glory. They deny God’s sovereignty by claiming God can save only after we consent.

Infant baptism is a debate in the Church today. The paedobaptist verses credobaptist debate. Both are within orthodoxy. But a study of scripture has convinced me of paedobaptist position. Paedobaptists baptize infant children of believers. Credobaptists only baptize those who make a credible profession of faith.

Credobaptists refuse baptism to infants because infants are incapable of understanding. Paedobaptists point out, baptism is the sign of promise of the forgiveness of sins. So we should not deny it to infants.

This passage points to paedobaptism. But, I have to yield to my credobaptist friends who point out it is far from definitive.

Allow me to take a quick aside. There is no definitive statement either way in scripture. That is why both are within the bounds of orthodoxy. I have reached my conclusion by the preponderance of the evidence.

At that, I will leave the research and study to you.

The children were young enough that they required the parents to bring them to Jesus. The disciples scolded the parents for bringing these young children to Christ.

These small children belonged to the kingdom because of the faith of their parents. As adults, they would need to exercise personal faith.

Small children model true believers. They know they have nothing to bring and only receive. Children are a picture of those whose simple trust illustrates what faith is all about.

Jesus’ remark to let the children come, illustrates how everyone is important to God. Even those whom others regard as insignificant are important to Him.

To whom do we go? To whom do we deem worthy of receiving the Gospel? Christ received all. He receives those we deem unworthy. In making a judgment who is to hear the Gospel we rob Christ of the glory and honor due Him.

The statement about receiving the kingdom as a child has to do with a child’s trusting spirit. It has nothing to do with any inherent humility a child might have. Have you ever been around children? They are completely self-centered. There is nothing humble about them.

Jesus used children to show how we are to receive the kingdom of God. We offer nothing. We exchange nothing. It is a gift. We are to receive it as a child would receive a gift. A child receives with joy and excitement.

Jesus said we are to receive as a child receives. He did not say we are to do or behave like a child. That is, a total disclaiming all worthiness and fitness as if we were but a week old.

Jesus took the children and blessed them. Jesus included children in the blessings of the covenant.