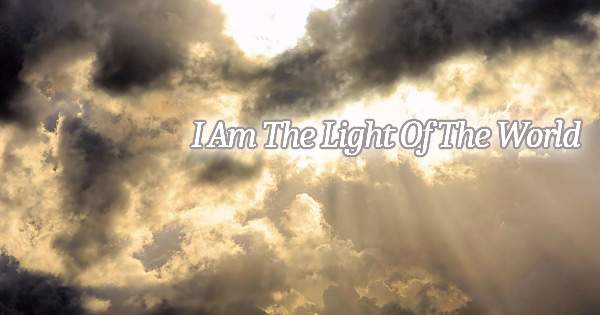 Again Jesus spoke to them, saying, “I am the light of the world. Whoever follows me will not walk in darkness, but will have the light of life.” So the Pharisees said to him, “You are bearing witness about yourself; your testimony is not true.” Jesus answered, “Even if I do bear witness about myself, my testimony is true, for I know where I came from and where I am going, but you do not know where I come from or where I am going. You judge according to the flesh; I judge no one. Yet even if I do judge, my judgment is true, for it is not I alone who judge, but I and the Father who sent me. In your Law, it is written that the testimony of two people is true. I am the one who bears witness about myself, and the Father who sent me bears witness about me.” They said to him, therefore, “Where is your Father?” Jesus answered, “You know neither me nor my Father. If you knew me, you would know my Father also.” These words he spoke in the treasury, as he taught in the temple; but no one arrested him because his hour had not yet come.

So he said to them again, “I am going away, and you will seek me, and you will die in your sin. Where I am going, you cannot come.” So the Jews said, “Will he kill himself, since he says, ‘Where I am going, you cannot come’?” He said to them, “You are from below; I am from above. You are of this world; I am not of this world. I told you that you would die in your sins, for unless you believe that I am he you will die in your sins.” So they said to him, “Who are you?” Jesus said to them, “Just what I have been telling you from the beginning. I have much to say about you and much to judge, but he who sent me is true, and I declare to the world what I have heard from him.” They did not understand that he had been speaking to them about the Father. So Jesus said to them, “When you have lifted up the Son of Man, then you will know that I am he and that I do nothing on my own authority, but speak just as the Father taught me. And he who sent me is with me. He has not left me alone, for I always do the things that are pleasing to him.” As he was saying these things, many believed in him.

The passage just before this section, John 7:53 – 8:11, is not in the earliest manuscript. For that reason and some linguistic reasons, scholars believe that someone inserted it later. So, the context of this passage becomes clearer if we read it as coming right after John 7:52.

Jesus is still in the Temple on the last day of the feast. Jesus has just stood up and yelled: “If anyone thirsts, let him come to me and drink.” When we looked at that passage, I mentioned how water played a large part of the celebration. The Feast of Tabernacles celebrated God’s provision while they were in the wilderness. God had supplied them with water in the wilderness.

So here they are in Temple at night. They are ready to light the touches celebrating God with them. Jesus once again says He was the one with them in the wilderness. He was the rock from which water flowed. “Out of his heart will flow rivers of living water.” (John 7:38b) Now Jesus says He is the light that was with them in the wilderness. “I am the light of the world. Whoever follows me will not walk in darkness, but will have the light of life.”

All this occurred in the treasury. The Treasury was next to the Court of the Women. That is where the celebration of lighting the touches took place. Jesus is standing right next to the place where priests will light the touches. The people gathered at the Temple would not have missed the association.

Jesus is the rock out of which flow rivers of water. Jesus is the light. Jesus is the one who provided in the wilderness. The people would have understood this reference.

We too are a wilderness people. We are thirsty. We live in the darkness. And Christ provides abundant water to quench our thirst. This is not just a fountain. There are rivers of water. There is a lot of water. And He is our light. He lights our path and lets us know He is there.

Christ calls us to follow Him. “Whoever follows me will not walk in darkness, but will have the light of life.”

The chief priests had sent people to arrest Jesus. But the temple guards failed to do it so now the Pharisees confront Jesus in public. The Pharisees now put Jesus on trial. It was a sort of kangaroo court. But Jesus flips the situation. When they accuse Jesus, He becomes the accuser and judge.

They say Jesus is testifying about Himself. In a trial, the accused and accuser gathers witnesses. The witnesses are to give testimony. They tell Jesus you cannot be your own witness. Jesus response is, “Yes I can.”

You can imagine this did not go over well. Jesus does not stop there. He turns the tables. He tells them He was not judging anyone. But when He judges it will be a just judgment. He does not judge alone He judges with the Father.

Jesus tells the Pharisees His is not an ordinary man. He knew where He came from. He knew where he was going. He knew His purpose. Jesus states His origin was not from this world. This excluded Him from the ranks of the ordinary.

Jesus said, “I judge no one.” Commentators differ on the meaning. Some say Jesus is saying He does not judge as a man. Others say Jesus is referring to His office as a judge. Jesus was not then in the office of judge. Jesus will judge the earth when he assumes the office of judge. Either or both of these understanding may be true. Christ does not surrender His right to judge. “Yet even if I do judge, my judgment is true.”

Jesus’ reference to God the Father as His Father causes the accusers to mock Him. “Where is your father?” They did not understand Jesus is referring to the God Head as His Father. The Pharisees may have been referencing His birth. They had heard the stories about Mary. They mock Jesus. Calling Him a bastard. Hey, Jesus, you don’t know where your real father is. You don’t even know who he is.

Jesus is unwavering. He points out their ignorance. “You know neither me nor my Father. If you knew me, you would know my Father also.” Jesus’ accusers are like us in so many ways. We think we are so smart when we are so ignorant. “Claiming to be wise, they became fools.” (Romans 1:22)

To know God, we must start with Christ. We have a clear vision of God in the person of Christ through the Gospel.

Jesus tells the Pharisees a second time He will only be with them for a little while. And where He is going they cannot come. The first time was in John 7:33-34 Remember this is all one encounter. They ask themselves again what does He mean? The first time they thought he was going to the Jews outside Judea. But now they are starting to realize Jesus is referring to His death.

“I told you that you would die in your sins, for unless you believe that I am He you will die in your sins.” Jesus is clear. There are two destinations for humanity. Everyone will not be saved. Only those who believe or trust Him will be saved. All others will perish. The only way to salvation is to believe.

The Pharisees sort of get it. They understood Jesus was talking about His death. They asked themselves, “Will he kill himself?” As I stated above our ignorance is willful. They sort of get it but held on to their false assumptions.

Jesus explains that to them. He points out they assumptions are all wrong. They are trying to put truth in a container the cannot hold it. “You are from below; I am from above. You are of this world; I am not of this world. I told you that you would die in your sins, for unless you believe that I am he you will die in your sins.” (v 23-24)

Again they almost get it. They understood Jesus was telling them they were of the devil. Their response is “Just who do you think you are?” Jesus says He has already told them. He told them from the beginning who he was. He is from the Father.

They did not understand Jesus was referring to the God Head as the Father. So, when Jesus is lifted up they will see who He is. The phrase “lifted up” was a double meaning. It refers to both Christ’s crucifixion and his exaltation. Christ’s death, resurrection, and glorification reveal God’s glory.

“He has not left me alone, for I always do the things that are pleasing to Him.” The unity between the Son and the Father is unbroken. What Christ says the Father says.