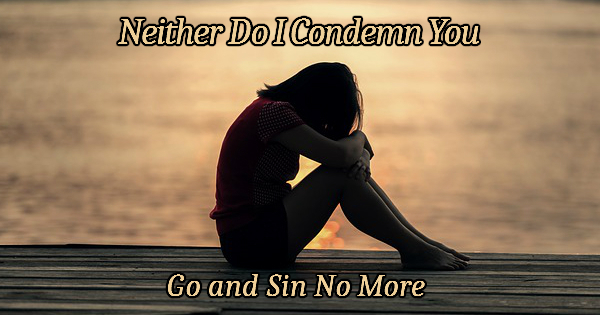 They went each to his own house, but Jesus went to the Mount of Olives. Early in the morning, he came again to the temple. All the people came to him, and he sat down and taught them. The scribes and the Pharisees brought a woman who had been caught in adultery, and placing her in the midst they said to him, “Teacher, this woman has been caught in the act of adultery. Now in the Law, Moses commanded us to stone such women. So what do you say?” This they said to test him, that they might have some charge to bring against him. Jesus bent down and wrote with his finger on the ground. And as they continued to ask him, he stood up and said to them, “Let him who is without sin among you be the first to throw a stone at her.” And once more he bent down and wrote on the ground. But when they heard it, they went away one by one, beginning with the older ones, and Jesus was left alone with the woman standing before him. Jesus stood up and said to her, “Woman, where are they? Has no one condemned you?” She said, “No one, Lord.” And Jesus said, “Neither do I condemn you; go, and from now on sin no more.”

The context is important to understanding what was going on. The Jews tried twice to arrest Jesus during the Feast of Tabernacles or Feast of Booths. The first time was in the middle of the feast. The second time was on the last day of the feast. They failed both times.

You can imagine the frustration the chief priests must have felt.

The feast was over and everyone has gone home. But Jesus did not return home or go back to Galilee. He went to the Mount of Olives just outside Jerusalem.

The day after the feast was over Jesus goes back to the Temple to teach. This was the place they had tried to arrest him twice the previous week. So it is not surprising the officials would try to arrest Jesus again. But this whole story smells of entrapment. They must have stayed up all night developing this plot.

Here was the trap. They would bring to Jesus a clear violation of the Mosaic Law. A violation which required capital punishment. They would ask Jesus what to do about this violation. If He allows the execute, they would turn Him over to the Roman authorities for treason. Win. The only one with the authority to carry out capital punishment was Rome. If Jesus extends mercy and forgives the woman, he compromises the Mosaic Law. Win. With this plan, they would neutralize Jesus. It was a brilliant plan.

They found a woman who was probably known to be a prostitute and used her as the bait. If she died in this trap, the Pharisees would consider it a bonus. The Pharisees believed, if Israel would keep the Law, the Messiah would come. If she died, this plan could have the added benefit of eliminating a Lawbreaker. From the Pharisees’ point of view, this could be a double win.

To execute someone according to the Mosaic Law you needed more than one witness. They had the witnesses. They said, “We have seen this.” People committing adultery don’t usually commit the act in the open. But they all saw it. The Law also required capital punishment for both parties. So where was the guy? It takes two to tango so to speak. Again this whole thing smells like a contrived plot.

Jesus went to the Temple early in the morning. The people came to Him and sat down and He taught them. According to the culture sitting down was what teachers did when they taught. Contrast that to the times during the festival where Jesus stands and cries out. Standing was an unusual position for teachers. Sitting down was the proper position for teaching. This shows in the previous events He was not trying to teach but rather proclaim.

What was Jesus teaching? He was teaching the scriptures, the Law of Moses and how he was the fulfillment of the Law. The Scribe and Pharisees could not have asked for a better set up.

While Jesus was teaching, they brought this woman into the middle of the class. Everyone saw her. “Alright, Jesus you are teaching the Law. Here is this woman violating the Law. Let’s see how good you are at keeping the Law.” They are thinking, “Gotcha!”

Let’s understand what was going on. The woman was adulterous. That is not in dispute. This is probably not her first time. She is probably well practiced. So she violated the Law. There is no question about that.

The women in John’s book represent us. We are this woman caught in adultery. We are the bride of Christ. We are accused. Satan, the great accuser, accuses us. It is not a false accusation. The accusation is true. Satan does not need to invent lies. He accuses us of what we are guilty of doing.

Jesus did not look at the woman and say,”What they said was untrue. You are a good person. You were just caught in a bad situation. In is not your fault.” When Satan accuses us, Christ does not say that is not true or that it is not our fault.

Christ hears the accusation and banishes the accusers. “Those who are without sin let him cast the first stone.” Then Jesus turns to the woman and asks, “Where are your accusers? I do not condemn you either. Go and do not sin anymore.”

Christ not only forgave the woman, He frees her from the practice of sin. When Jesus says go and sin no more, He acknowledged her sin. Jesus released her from the guilt and the grip of her sin.

We have all been caught in the act. We all deserve death. And to each of us, Jesus says, “Where is your accuser?” Paul in Romans 8:1-2 says, “There is therefore now no condemnation for those who are in Christ Jesus. For the law of the Spirit of life has set you free in Christ Jesus from the law of sin and death.”

So where are our accusers? We can now say with the woman, “They are not here.” Christ says to us “Neither do I condemn you; go, and from now on sin no more.”