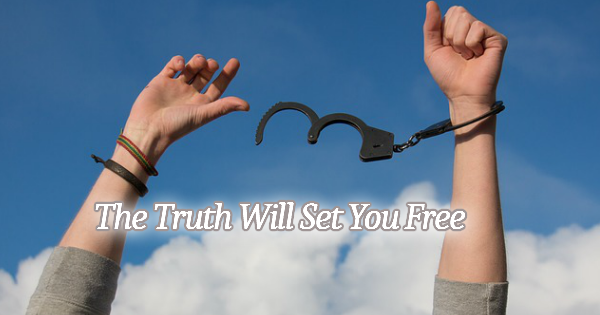 So Jesus said to the Jews who had believed him, “If you abide in my word, you are truly my disciples, and you will know the truth, and the truth will set you free.” They answered him, “We are offspring of Abraham and have never been enslaved to anyone. How is it that you say, ‘You will become free’?”

Jesus answered them, “Truly, truly, I say to you, everyone who practices sin is a slave to sin. The slave does not remain in the house forever; the son remains forever. So if the Son sets you free, you will be free indeed. I know that you are offspring of Abraham, yet you seek to kill me because my word finds no place in you. I speak of what I have seen with my Father, and you do what you have heard from your father.”

It is the last day of the Feast of the Tabernacle. Jesus has been teaching. He has made quite a commotion. They have tried to arrest Him twice but could not. In God’s providence, it was not the time for His arrest. Jesus is now involved in a debate with the Pharisees.

Many believed Jesus. He turns to address those who believed Him. He tells them to abide in His word.

Jesus tells His new converts is to abide in His word. It was not enough to start well. We must run the entire course. We must finish well also. We must abide.

Jesus is telling us to have a strong foundation in His word. A mere acquittance is not good enough. There are many who profess to be disciples but are not. His disciples persevere in His word. We are to know His word not just know about it.

To know something is more than hearing about it. I took French in school. I can say a few sentences in French. I can recognize French when I hear people speak it. But if you would say I know French you would be wrong. I know about French I do not know French.

We often confuse knowing about something with knowing something. Many know about the Gospel but do not know the Gospel. Knowing the Gospel, knowing the truth, will set you free. The fruit or effect of knowledge of the Gospel is freedom.

The crowd’s response to Jesus saying the truth will set them free is puzzling. They claimed no one ever enslaved them. After all, they were children of Abraham. Say what! This is the Feast of Tabernacle. They were celebrating God provision in the wilderness. They were in the wilderness when they left their enslavement in Egypt. They were slaves in Egypt. The temple they were standing next to was not the temple Solomon built. The Babylonians destroyed that temple and carried them off into slavery. The Babylonians enslaved them. They were currently living under the bondage of Rome. And before Rome, there were the Greeks under Alexander. That’s is just the highlights. There were many other less dramatic examples of Israel’s enslavement.

Really? Really! You were never in enslaved to anyone? Not only could they not remember history, they denied their current reality. This is an incredible act of self-deception.

Perhaps they were referring to spiritual bondage. If that is true, they are claiming a spiritual freedom because of a physical heritage. They were degenerate sinners. Yet they believed family lineage caused regeneration. This is a common error in all ages. I am Christian. I live in a Christian country. I am a Christian. I grew up in a Christian home. Of course, my favorite is one I came across in an outreach program. We asked a lady if she was a Christian. In an indignant tone, she said, “I’ll have you know I have a Bible in my house which is over 100 years old.” I am a Christian. I own a Bible.

How is it that we think we are free when we are slaves? We confuse “free will” with freedom. We believe we are free to choose. But we are free to choose only what we want. We choose to sin because we want to sin. We confuse choice with freedom. We can only choose the desires of our hearts. By nature we do not desire the things of God. (Romans 3:10-18) Therefore, we do not choose God. Our “free will” will not allow us to choose God. We do not choose the truth because we do not want the truth.

We choose to sin because we are slaves to sin. That is not freedom. It is like Henry Ford saying, “You can have any color car you want so long as it is black.” There is no freedom in sin.

Christ is the one who sets us free. Notice Jesus does not say the truth will set you free so study harder. Jesus says the Son sets you free. You do not do it yourself. He is the truth. (John 14:6). Regeneration is the work of the Holy Spirit, accomplished by Christ’s death and resurrection. Christ concedes they are children of Abraham. But His response to that concession is “so what.” Our pedigree has no value in our salvation.

Christ implies they are children of the devil because they opposed Him. We too prove out parentage is Satan when we oppose Christ. The scary part is the Pharisees thought they were on God’s side. When they were opposing Christ.

How can we ensure we do not delude ourselves? By knowing the truth. Jesus is the Truth.