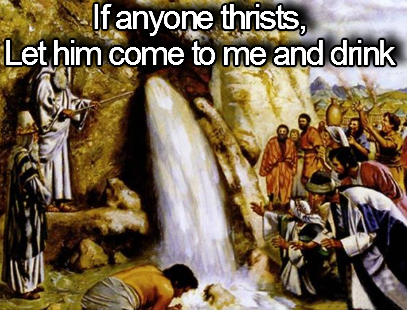 On the last day of the feast, the great day, Jesus stood up and cried out, “If anyone thirsts, let him come to me and drink. Whoever believes in me, as the Scripture has said, ‘Out of his heart will flow rivers of living water.’” Now, this he said about the Spirit, whom those who believed in him were to receive, for as yet the Spirit had not been given because Jesus was not yet glorified.

Let’s set the context. Jesus is in Jerusalem during the Feast of Booth. This feast is also called the Feast of Tabernacles. This is a Feast where the Jews remembered the time their ancestors wandered in the wilderness. They had no homes to live in. The Jews remembered this by re-enacting it. Along with religious ceremonies, they would build temporary shelters live in them during the feast.

In the religious ritual, the priests walked around the altar seven-time with seven golden pitchers. Then, they poured the water out of the pitchers. They were noting how God had given them water in the wilderness.

Jesus went to the feast in private. He did so to avoid the rulers who were trying to kill Him. In the middle of the feast, Jesus stood and started teaching in the temple. He proclaimed that he was the Messiah. Some believed and some did not. The crowd was starting to turn to Him. So the Pharisees and the Chief Priests sent the temple guards to arrest Him. They were unable to arrest Jesus. The time had not come for Jesus to die. God had set that time from all eternity.

Now, imagine the scene. It is the last day of the Feast. Jesus is back in the Temple. The priests are going through their ritual with the water. You are enjoying the feast’s ceremony. All of a sudden this guy cries out so everyone can hear. “If anyone thirsts, let him come to me and drink. Whoever believes in me, as the Scripture has said, ‘Out of his heart will flow rivers of living water.’”

The in the Greek word translated “cried out” means screamed. Jesus was screaming at the top of his lungs. Everyone heard him. He was not saying,”Excuse me. Could I have your attention please?” So much for being incognito.

They in the middle of a religious ceremony. They are celebrating God giving them water in the wilderness. Jesus screams, “If you are thirsty, come to me and drink. The water is not over there. The water is over here.”

In 1 Corinthians Paul give us some insight to what is going on.

Paul is saying Christ was with them in the wilderness. There was a rock they drank from and that rock was Christ. God told Moses to speak to the rock. When he spoke to the rock water would come out.

Instead, Moses strikes the rock in anger. (Numbers 20:6-12) That is the reason God did not allow Moses to enter the promised land. He struck the second member of the trinity.

Now Jesus is in the Temple drawing people’s attention to the water’s source. Jesus is saying “Over here. I’m over here. I have rivers of the water.”

This is a dramatic moment. Jesus was saying I am the one who provided the water in the wilderness. I am the one you are to celebrate.

We are wilderness people. We do not have a home here in this world. Like the Israelites God called out of Egypt, He calls us out the world. We are between the homes. We are wondering in the wilderness. We will get thirsty. When we need refreshment we are to turn to Christ. When we thirst we are to go to Jesus. Out of Him flows rivers of living water.