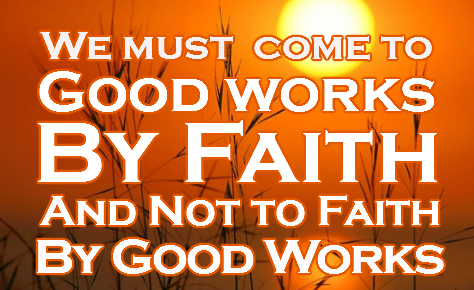 The Pharisees heard the people talking among themselves. They were asking if Jesus was the Christ. The Pharisees needed to put a stop to that. So the chief priests and the Pharisees sent officers to arrest Jesus.

The Pharisees cherished their reputation as the greatest zealots for the Law. Jesus came preaching the forgiveness of sins by grace alone. Righteousness did not come by the Law. This contradicted everything the Pharisees believed.

The Pharisee’s efforts were not enough to oppose Christ. So, they enlisted the aid of the chief priests. The two groups now conspired under the guidance of Satan against the Son of God.

Some think that Jesus’ response was to the entire crowd. But I believe Jesus was addressing the officers and those who sent them. I think the context better supports this view. The chief priests and Pharisees were trying to destroy Him. They had not heeded Christ’s message.

Jesus ridicules their efforts. Their efforts were ineffective and would remain so until the time came the Father had decreed.

It is ironic. The Pharisees were trying to earn their righteousness by works of the Law. It was hard work keeping the Law. No one except Christ was perfect in keeping it. So here is Christ offering them righteousness by grace alone. He is just going to give it to them. And they are trying to kill Him for giving them the thing they were working so hard to get. Christ offered them the greatest gift they could ever receive. And they tried to kill Him for it.

Jesus rebukes their ingratitude as well as alluding to His death when He says He is with them a little longer. He warns them God will not allow them to abuse His grace much longer. His death is not in their hands. It will be at a time and place determined by the Father.

When Jesus says I am going to Him who sent me, He says His death is not the end. He would rise from the dead. It was not the end but a new beginning. There would be a new covenant with all mankind, a covenant of grace. If we accept the gracious offer, He leads us to the Father.

What did Jesus mean by, “You will seek me and you will not find me.” He was right there in front of them. It looks like they found him. Some think this is a reference to the doctrine of works. The Jews were seeking righteousness by works. Of course, they failed. It is impossible to get righteousness by works. (Romans 9:30-33 Romans 3:10-12)

Some think Christ is referring to the person of the Messiah. They sought for the Messiah and could not find Him. The Jews had a wrong understanding of who and what the Messiah was.

Calvin believes this refers to the search of God. They sought God by their efforts and works. Wicked men, which we all are, cannot look upon a holy God. In scripture, whenever men got a peek into the holiness of God, it struck them with terror.

So we learn here that Christ’s offer of grace is not unlimited. God will one day withdraw it. So, we should accept the offer without delay. The opportunity to enjoy Him may pass us by. Once God removes that opportunity it is gone forever. As Isaiah says, Seek the Lord while He may be found. (Isaiah 55:6)

The tense Jesus using is interesting. “Where I am you cannot come.” He speaks in the present tense, not the future tense. Christ was in an intimate relationship with the Father. The officers, Chief Priests, and Pharisees could not come into that relationship. They rejected God’s gracious offer.

Jesus enemies missed the tense. They heard future tense. As a result, they ask, where was he going. They guessed Jesus was going to the Jews who were living outside of Palestine. At this point, they could not imagine Christ going to the uncircumcised. They (we) were unclean. They forgot the Jews were to be a light to the nations. They were to bring the glory of God to all nations.

Jesus Christ sent His Gospel to the Gentiles. The entire world has God’s glorify proclaimed to them. Jesus offers forgiveness and righteousness. He offers it by God’s grace alone. It comes through faith alone in Him alone. It is all for the glory of God alone. Receive it while you can.