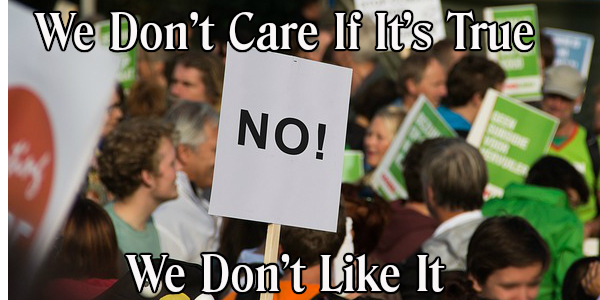 Some of the people of Jerusalem, therefore, said, “Is not this the man whom they seek to kill? And here he is, speaking openly, and they say nothing to him! Can it be that the authorities really know that this is the Christ? But we know where this man comes from, and when the Christ appears, no one will know where he comes from.” So Jesus proclaimed, as he taught in the temple, “You know me, and you know where I come from. But I have not come of my own accord. He who sent me is true, and him you do not know. I know him, for I come from him, and he sent me.” So they were seeking to arrest him, but no one laid a hand on him because his hour had not yet come. Yet many of the people believed in him. They said, “When the Christ appears, will he do more signs than this man has done?”

It is amazing. They just said no one was trying to kill Christ. They said Jesus was crazy for saying they were trying to kill Him. But following right on the heels of that claim. Some of the people ask, “Isn’t this the guy they want to kill?” It was general knowledge the Jewish leadership wanted to kill Christ.

Christ was here speaking in the open, in the temple. And the rulers said nothing. The leadership’s inaction led some to believe the leadership believed Jesus was the Christ. They failed to take into account the providence of God. It was not the time for Christ to die.

The ruler’s objection provided a convenient justification for unbelief. In our sinfulness, we contrive all kinds of impediments to accepting the Gospel. But now, too many, the rulers appeared to remove their objection. This removed that obstacle to faith. So men created new reasons for unbelief. They believed the origin of Christ would be unknown. But the Micah points out where Christ would be born (Micah 5:2). God promised the Redeemer would be of the seed of David. Plus this is an office God claimed for Himself. So, the Christ must be God in flesh.

They crowd knew where Christ came from, Bethlehem. He was flesh and blood. He was a man. He was in the line of David. Jesus pointed that out. “You know me and you know where I come from.” Their false understanding the prophets led them away from the Christ. We are often guilty of the same thing. We substitute what we think the scriptures say for what the scriptures say. It is easier than studying and learning the scriptures.

Christ tells the crowd that He was sent. And the One who sent Him is true. Jesus calls God “true” in the same sense Paul calls God “faithful.” (2 Timothy 2:13)

Jesus tells them He knows God and they do not. It is no wonder they do not know Him. They do not know God. Jesus already knows they hate Him. Rather than trying to smooth everything over and find common ground, He does not yield. Christ is bold. He confronts their arrogance head on.

Christ sets an example we do not like, but it is clear. We are to speak the truth with boldness. We are His. The world does not know us because they do not know Him. When the entire world opposes us for teaching sound doctrine, we are to appeal to God. This is also modeled for us by the prophets and Apostles. Jeremiah appealed to God as his defender (Jeremiah 20:7). When Isaiah was overwhelmed he stood strong by fleeing to God’s refuge (Isaiah 50:8). When unjust accusers opposed Paul, he appealed to the Lord. (1 Corinthians 4:5) We should follow their lead.

But, we should take care that we are teaching sound doctrine. When Christ says He knows God, it is with good cause. We are not to assume the name of God with ease. Fanatics are bold and eager to reject other people’s opinions and replace them with their own. We are to avoid pride and self-serving actions. We are to find and proclaim the truth of God, not our opinions.

Christ’s words provoked the crowd. He made them mad. They not only wanted to kill Him, they put their desires into action. They tried to arrest Him. But John tells us Christ’s hour had not yet come. That is, the time providentially declared by God had not arrived. So all their violence and attacks were unproductive. The Father guarded and protected Christ. The time God declared from all eternity had not arrived.

Even though many tried to arrest Christ, many believed in Him. To this point, we could have concluded that Christ was only preaching a deaf crowd. Yet, John says some followed. The preaching of Gospel is never without effect.

But those who relied on doctrine believed in Christ. They were willing to listen to Him. They showed themselves willing to receive instruction from Him. This is faith. No matter how small faith may be, it is acceptable to God.