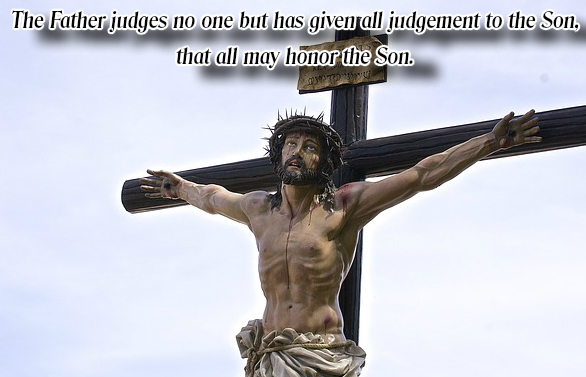 So Jesus said to them, “Truly, truly, I say to you, the Son can do nothing of his own accord, but only what he sees the Father doing. For whatever the Father does, that the Son does likewise. For the Father loves the Son and shows him all that he himself is doing. And greater works than these will he show him so that you may marvel. For as the Father raises the dead and gives them life, so also the Son gives life to whom he will. For the Father judges no one but has given all judgment to the Son, that all may honor the Son, just as they honor the Father. Whoever does not honor the Son does not honor the Father who sent him. Truly, truly, I say to you, whoever hears my word and believes him who sent me has eternal life. He does not come into judgment but has passed from death to life.

“Truly, truly, I say to you, an hour is coming, and is now here, when the dead will hear the voice of the Son of God, and those who hear will live. For as the Father has life in himself, so he has granted the Son also to have life in himself. And he has given him authority to execute judgment because he is the Son of Man. Do not marvel at this, for an hour is coming when all who are in the tombs will hear his voice and come out, those who have done good to the resurrection of life, and those who have done evil to the resurrection of judgment.

Jesus had just healed a man who was an invalid for thirty-eight years. This upset the Jews. Christ broke the Sabbath and had the man broke the Sabbath by carrying his bed. Jesus’ response was to say it was fine because He was the Son of God. That inflamed the Jews even more and they wanted to kill Him for saying He was equal with God.

How does Jesus respond? He does not try to defuse a volatile situation. No. He doubles down.

Jehovah Witnesses infer from verse 19 Jesus, the son, is inferior to the Father because Jesus says right here that He can do nothing of his own accord. This is the ancient Arian heresy. The Church Fathers answered this. They noted these words only denote a distinction of the persons. It is clear from the preceding verses the Jews understood Jesus was not saying He was not inferior to the Father. “He was even calling God his own Father, making himself equal with God.” (v18b)

This passage is about more than the Divinity of Christ. It includes the authority of Christ in the flesh.

Jesus tells the Jews the Father loves the Son. By this, He distinguishes Himself from angels and other men. This love is the reason the Father does everything through Christ. There is an intimate communication between the Father and the Son. That is what Christ means when He says the Father, “shows Him all that He Himself is doing.”

Jesus now refers back to the healing of the lame man and says He will do even greater works. The reaction to these greater works will be wonder. Christ tells them He will raise the dead and they will respond as if they think it was a magic trick. Christ is saying the response of wonder is inappropriate. The proper reaction is worship.

Christ declares Himself the author of life. Life is more than biological life. Christ is referring to true life. Life contains righteousness and all the gifts of the Holy Spirit. It contains every part of our salvation.

In verse 24, Jesus describes how to honor God. That is, He describes proper worship. “Whoever hears my word and believes Him who sent me has eternal life. He does not come into judgment, but has passed from death to life.” False professions of Christianity is epidemic today. But here Christ demand nothing more or less than to obey His Gospel.

He also states the results of obedience, eternal life. And Christ states we receive life through hearing His word. The church today has forgotten who saves. We think it is our job to convince people of the truth of Christianity. That is not our job. Our job is to tell people the Gospel. It is not to produce light shows, hire rock and roll bands, or do puppet shows for children. Our job is far simpler. Our job is to tell people about Jesus.

Jesus said whoever believes Him has eternal life. This does not mean as believers we are sin free. Believers always carry the cause of death. But the Spirit that dwells in us is life. The Spirit will destroy what remains of death. As Paul said, “The last enemy to be destroyed is death.” (1 Corinthians 15:26)

In verse 25 when Jesus says, “an hour is coming, and is now here when the dead will hear the voice of the Son of God.” It is generally agreed He is speaking of Spiritual death. First Christ shows we are all dead before He brings us to life.

The whole man, so far as it relates to the kingdom of God, is dead. Since our nature is so corrupted it has no power to even desire righteousness. The life of God is not in us. Christ must infuse it. That is, our life is not our own. The grace of Christ brings true resurrection from the dead.

The hearing is not just sound waves that hit our ears. It is the Christ speaking to our hearts by His Spirit. He awakens our heart from death so we may receive eternal life.

“The Father has life in himself…” God lives by His own inherent power. Because He has in Himself the essence of life, He communicates life to men.

The Father has given Christ the authority to rule over the world. Christ exercises the power of the Father Himself. The Father appointed Christ, to be the Author of life. We do not need to seek for it. Christ brings it to us. He offers it to us as a gift. Our proper response to this gift is worship.

But what are good works? “All have turned aside; together they have become worthless; no one does good, not even one. Romans (3:12) You may think of many who do not follow Christ and do good works. You may think you this shows Paul’s statement false. If that is what you think it is because you do not understand goodness.

There is not a single work we do that is altogether good unless God pardons the sins which belong to it. All we are and all we do is imperfect and corrupt.

It is like a beautiful meal prepared by a person with hepatitis. It may look good. It may taste good. Its presentation may be exquisite. But the person who prepared the meal contaminated it. The meal will cause sickness and death. The meal appears to be a good meal. But it is not.

Christ promised life to the thief on the cross. What was the fruit of that gift? The thief was hanging on a cross. He could not do anything. His good work was his belief and trust in Christ.

Christ offers the gift of life. Do good. Believe and have life.