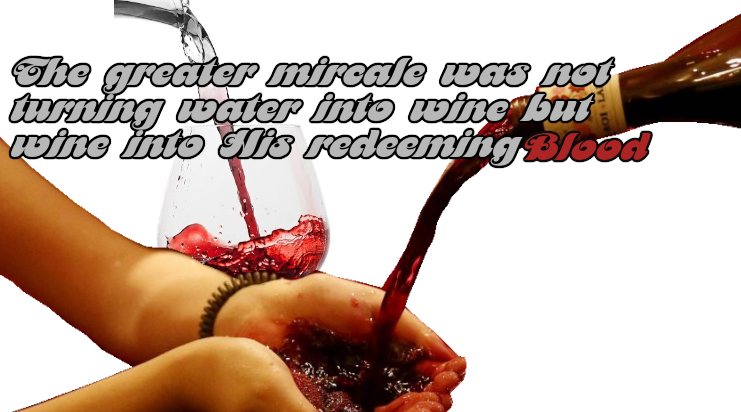 On the third day, there was a wedding at Cana in Galilee, and the mother of Jesus was there. Jesus also was invited to the wedding with his disciples. When the wine ran out, the mother of Jesus said to him, “They have no wine.” And Jesus said to her, “Woman, what does this have to do with me? My hour has not yet come.” His mother said to the servants, “Do whatever he tells you.”

Now there were six stone water jars there for the Jewish rites of purification, each holding twenty or thirty gallons. Jesus said to the servants, “Fill the jars with water.” And they filled them up to the brim. And he said to them, “Now draw some out and take it to the master of the feast.” So they took it. When the master of the feast tasted the water now become wine, and did not know where it came from (though the servants who had drawn the water knew), the master of the feast called the bridegroom and said to him, “Everyone serves the good wine first, and when people have drunk freely, then the poor wine. But you have kept the good wine until now.” This, the first of his signs, Jesus did at Cana in Galilee and manifested his glory. And his disciples believed in him.

A monk in 15th Century added chapters breaks to the Biblical text. They were not in the original text. While the chapter breaks are helpful in locating passages, sometimes they get in the way of understanding the passages. Chapter 2 breaks up the text in a way that makes understanding difficult. We fail to connect Jesus changing water to wine and His telling Nathanael he would see greater things. This sign is the first of the signs of Jesus’ glory peaking through.

Joseph does not appear anywhere the gospel stories during Jesus’ ministry. Tradition holds that he had died. If that is true Jesus, being the oldest male, is now the family head.

What is going on is during the entertainment the host or hostess runs out of wine. This makes it appear the family did not plan well for their guest.

Most likely the wedding is for one of Jesus close relatives, perhaps a brother. This would put Mary in a responsible position in regards to this problem. This is not an unusual problem. Things like this happen all the time. They may be embarrassing. But they are not unusual. The context shows they ran out of wine near the end of the celebration. This was not a great catastrophe. It was only an embarrassment.

We can read Mary’s coming to Jesus with, “They have no wine.” with several different tones of voice. It could be a tone of, “Can you believe it. They ran out of wine. I can’t believe they did not plan enough.” Or if it was Jesus brother Mary’s tone may be a tone of disgust. “They have no wine can you believe it. Your brother screwed up this time.”

But Jesus response indicates Mary came to Him with a problem and a plea for help. She is not asking for a miracle. Mary may have expected Jesus to say or do something to put the guests at ease. She may have been expecting him to go to the wine merchant and buy more wine. She was expecting something ordinary. She was not expecting a miracle. The ordinary is the common way God works. That is why we call it ordinary. The fact Jesus did the extraordinary makes this a sign. Remember why the evangelist says he wrote this book. He said he selected a few of the many signs Jesus did so we would believe Jesus was the Christ.

Jesus’ response to her was not so much for her but for others. Nothing Christ did was in obedience to her command. His hour had not yet come. Mary is still subject to God. Jesus is God. Mary cannot command God to do anything.

The reply “My hour has not yet come.” should remind us to avoid superstition and not elevate Mary above her rightful place. The idea of praying to her because Jesus will not refuse a request from His mother is wrong. Rome insults Mary when they take glory belonging to God and give it to Her. Christ does not send us to His mother but invites us to come to Him.

Mary tells the servants to do whatever Jesus commands. She still has not idea what Jesus is about to do. She may have thought he would send them somewhere to buy wine.

Jesus tells the servants to fill the jars with water. These are large jars holding twenty to thirty gallons each. That means they will end up with a lot of wine. More wine than they need. They will have 120 to 180 gallons of wine. And this is the good stuff. It is a sign of both the quality and quantity of God’s love. The size and number of the jars prove the truth of the miracle. This miracle was undeniable. They could not have just stumbled across this amount of wine.

They used these jars for purification. The law prescribed a ceremony of washing. But men are prone to excess. The Jews were not satisfied with the simplicity God had prescribed. They had taken a good thing given by God and made it a superstition. We see the same thing today. We take the good things prescribed by God as if the acts have power in themselves. Saying a prescribed number of Hail Marys or Our Fathers has no power. Getting wet in baptism has no power. Eating bread and drinking little cups of wine, has no power. The power belongs to and comes from God.

When Jesus said to fill the Jars with water, the servants had no idea what was about to happen. They might have been thinking we already have enough water. What we need is wine.

Since the act of eating bread and drinking wine have no power in them we often miss a means of grace. God uses the ordinary to give extraordinary.

Then Jesus tells the servants to take the water to the master of the feast. I imagine the servant going, “This is stupid. We are going to get in so much trouble giving him water. Even this late in the party he can still tell the difference between wine and water.”

I understand that there is a view that Christ is a teacher of sobriety. So, there had to be no alcohol content in this wine. If that was the case it would have been wine. Just as the Jews took a good thing and misused it by making it a ritual. So we too abuse the goodness of God by taking His gifts to excess.