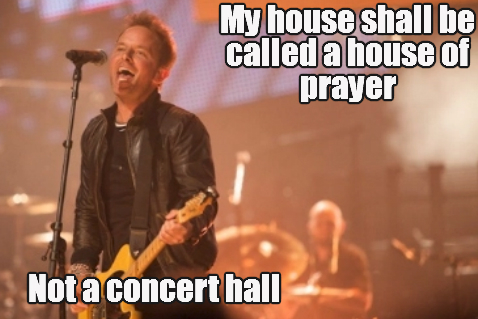 After this, he went down to Capernaum with his mother and brothers and his disciples. There they stayed for a few days.

When it was almost time for the Jewish Passover, Jesus went up to Jerusalem. In the temple courts, he found people selling cattle, sheep and doves, and others sitting at tables exchanging money. So he made a whip out of cords, and drove all from the temple courts, both sheep, and cattle; he scattered the coins of the money changers and overturned their tables. To those who sold doves he said, “Get these out of here! Stop turning my Father’s house into a market!”

His disciples remembered that it is written: “Zeal for your house will consume me.”

The Jews then responded to him, “What sign can you show us to prove your authority to do all this?”

Jesus answered them, “Destroy this temple, and I will raise it again in three days.”

They replied, “It has taken forty-six years to build this temple, and you are going to raise it in three days?” But the temple he had spoken of was his body. After he was raised from the dead, his disciples recalled what he had said. Then they believed the scripture and the words that Jesus had spoken.

Now while he was in Jerusalem at the Passover Festival, many people saw the signs he was performing and believed in his name. But Jesus would not entrust himself to them, for he knew all people. He did not need any testimony about mankind, for he knew what was in each person.

Temple guards stood at the entrance to the Court of Women. They prevented any non-Jew from entering. Rome had given them the authority to kill any non-Jew entering the temple, even Roman citizens. There was in inscription posted as a warning that those who entered and were not suppose to enter, would die.

The temple priests used the Court of the Gentiles as a bazaar. Vendors would sell sacrificial animals and exchange Roman money for temple money. Roman money was not allowed in the Temple because it had a picture of Cesar on it. Because it born Cesar’s image, it was an idol. Also, the sacrificial animals needed to be without blemish. Pilgrims to Jerusalem could buy acceptable animals in the Court of the Gentiles.

You could argument the vendors were providing a needed religious service. This practice allowed pilgrims more time to worship on Passover. They did not need to wander the city purchasing the needed sacrifices. Plus buying from an approved temple vendor ensured the quality of the animal. But merchants filled the area with their merchandise. That did not leave room for the Gentiles in the Court of the Gentiles. That was the only place they were allowed to go.

The exchange rates are unimportant. They may have been outrageous. But that is not what upset Jesus. In Matthew 21:13 Jesus says, “My house shall be called a house of prayer, but you make it a den of robbers.” Who were they robbing? They were robbing God of the Gentiles’ worship. Is it any wonder it angered Jesus?

This was not the only time Jesus clears the temple of merchants. There are other accounts in the other three gospels. The diversity of the stories indicates they are similar events but not the same. So, Jesus cleansed the temple at least twice.

There are several reasons this practice was abhorrent. First, it robbed God of worship. Second, the priest mocked God by selling merchandise for their own gain and greed. Third, even the slightest deviation from God’s command deserves correction. No matter what excuse men may use, it is evil.

Jesus drove the merchants and bankers out of the temple to restore its purity and worship of God.

How many times have churches used the house of worship for convenience? We build church sanctuaries as multi-purpose rooms. We bring in bands or comedians because “it will attract people to the church.” How often have we heard we need to change this or that for convenience? Convenience is not a valid reason to violate or pollute the worship of a holy God.

The disciples remembered the scripture from Psalms 69:9. “Zeal for your house will consume me.” They did not remember the passage at the time of the cleansing but later. God’s work is not always immediate but in time.

It took some time to drive all the merchants from the temple. Yet no one tried to constrain Christ. They were all stunned and struck by the hand of God. The practice of selling in the Court of the Gentiles was a common practice. So they had grounds to ask, “What gives you the right?” Everyone has the right and obligation to condemn corruptions. But no private individual may act in a rash or violent manner.

Christ’s referred to His body as the temple. Our body is a tabernacle, (2 Corinthians 5:4; 2 Peter 1:13,) Our soul dwells in our bodies. But Christ’s body contained His Divinity.

Our bodies also are temples of God but in a different sense. (1 Corinthians 3:16, and 1 Corinthians 6:19; 2 Corinthians 6:16). Our body is a temple because God dwells in us. But the fullness of the Godhead dwelt in Christ’s body. He was God manifested in flesh, (1 Timothy 3:16.)

Jesus did signs while he was in Jerusalem and many believed. Yet their understanding of the Messiah was different. Jesus knew their faith was not true. I do not mean to say they did not have faith. They even had faith in Jesus. Yet they had faith in the wrong thing. It was in a different Jesus. Their faith was in a Jesus who would restore Israel as a nation.

Having faith in a Jesus does not save. Salvation comes through faith in the real authentic Jesus. Let the scriptures reveal the real Jesus to you and trust in him alone for your salvation.