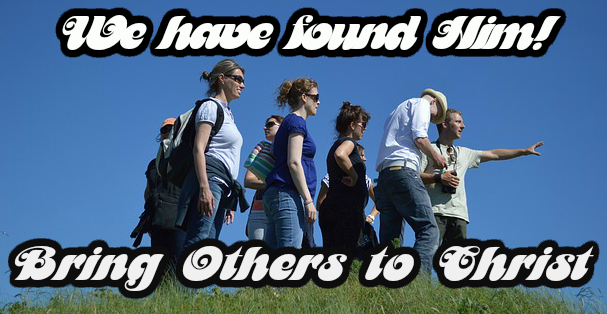 The next day again John was standing with two of his disciples, and he looked at Jesus as he walked by and said, “Behold, the Lamb of God!” The two disciples heard him say this, and they followed Jesus. Jesus turned and saw them following and said to them, “What are you seeking?” And they said to him, “Rabbi” (which means Teacher), “where are you staying?” He said to them, “Come and you will see.” So they came and saw where he was staying, and they stayed with him that day, for it was about the tenth hour. One of the two who heard John speak and followed Jesus was Andrew, Simon Peter’s brother. He first found his own brother Simon and said to him, “We have found the Messiah” (which means Christ). He brought him to Jesus. Jesus looked at him and said, “You are Simon the son of John. You shall be called Cephas” (which means Peter)

The next day Jesus decided to go to Galilee. He found Philip and said to him, “Follow me.” Now Philip was from Bethsaida, the city of Andrew and Peter. Philip found Nathanael and said to him, “We have found him of whom Moses in the Law and also the prophets wrote, Jesus of Nazareth, the son of Joseph.” Nathanael said to him, “Can anything good come out of Nazareth?” Philip said to him, “Come and see.” Jesus saw Nathanael coming toward him and said of him, “Behold, an Israelite indeed, in whom there is no deceit!” Nathanael said to him, “How do you know me?” Jesus answered him, “Before Philip called you when you were under the fig-tree, I saw you.” Nathanael answered him, “Rabbi, you are the Son of God! You are the King of Israel!” Jesus answered him, “Because I said to you, ‘I saw you under the fig tree,’ do you believe? You will see greater things than these.” And he said to him, “Truly, truly, I say to you, you will see heaven opened, and the angels of God ascending and descending on the Son of Man.”

An obvious question is if John recognized Jesus as the Christ. Why did not John drop everything and follow Jesus? Is this not being a little hypocritical?

John understood his mission was coming to an end. He does not try to exalt himself. The best way to move the spotlight to Jesus is for John to fade away into the sunset.

If he were a 21st century Christian John would say, “God used me for great things. I prepared the way. Now God will use me for even greater things.” No! John understood he must fade away. He must become less and less not greater and greater. God had a job for John to do. John did it. John does not serve his Lord by drawing bigger and bigger crowds. God does not capitalize John’s fame. It was time for John to fade away.

This is so contrary to what the popular preachers are preaching today. They preach continual striving, a constant working to be great. “God has bigger things planned for you.” There is no rest in that. Contemporary preaching has no rest in Christ. There is always something greater to do.

John understood his time was over. As a result, when he sees Jesus pass by, he points Jesus out to his own disciples. John had prepared disciples for Christ. Christ now begins to collect the church.

The two disciples go to Jesus because John said, “Hey guys what are you doing hanging around here? There goes the one I have been talking about.” Jesus said he would draw men to Himself. But he does so by the ordinary commendation of ordinary men. John sent these two and these two brought others.

Next, we get one of the hints that John is writing to non-Jews. He has to explain what Rabbi means. Rabbi means teacher. John also translates the Hebrew, “Messiah” to the Greek, “Christ.” The knowledge of the coming Messiah was secret for the Jews. Now it is proclaimed for the entire world.

Andrew brings Simon, his brother to Jesus. When Simon arrives Jesus gives him a new name, Peter or stone. This is not a rock like children throw. This is a sizable stone, a stone of substance. It is a stone used in buildings. It is fitting to say that all Christians may have the name stone. Together we form the temple of God. We are the individual stones which make up the temple.

Rome commits blasphemy when they take a stone and make it the head of the church.

The next day Jesus is on His way to Galilee. On the journey, He finds Philip and tells Philip to follow Him. John points out Philip is from the same town as Andrew and Peter. It is possible they knew each other. I believe they did and that is why John includes that fact. I believe it is another sign of how God uses ordinary means. But, there is no guarantee I am correct. Bethsaida was a sizable city. It was near there Jesus fed 5000 men. During the Jewish war, Josephus writes he sent 2000 armed men from Bethsaida to fight. Then he reinforced them with 3000 more men. So it is clear Bethsaida was a sizable city during Jesus day.

Philip like Andrew the day before finds Nathaniel and says he has found the Christ. Philip understanding of who Jesus is is not accurate. He calls Jesus the son of Joseph. He says Jesus is a native of Nazareth. Neither of which is true. Yet his desire to make Christ known is sincere. So often we are afraid of getting it wrong. We fear to say it wrong. As a result, we freeze and do nothing. God uses our frailties. It is not our job to convince anyone. It is not our job to convert the unconverted. That is God’s job. The job we are to do is proclaim Jesus. That is what Philip did.

Nathanael did not believe Philip. His prejudice prevented him from accepting Jesus as the Christ. It is Jesus who convert Nathanael.

Jesus calls Nathanael an Israelite who had no deceit in him. Jesus did not intend to flatter Nathanael. Jesus draws Nathanael close so Jesus may prove He is the son of God.

Jesus tells Nathanael he saw him before Philip called him. As a result, Nathanael believes Jesus is the Christ. Jesus’ reaction is not a rebuke as if Nathanael was too quick to believe. Rather, Jesus approves of Nathanael’s faith and promises him even greater things.

Jesus tells Nathanael he will witness angels ascending and descending from heaven. The disciples saw angels. They saw the glory of heaven when Christ ascended. Christ is now seated at the right hand of the Father and interceding to the Father for us. Praise God.