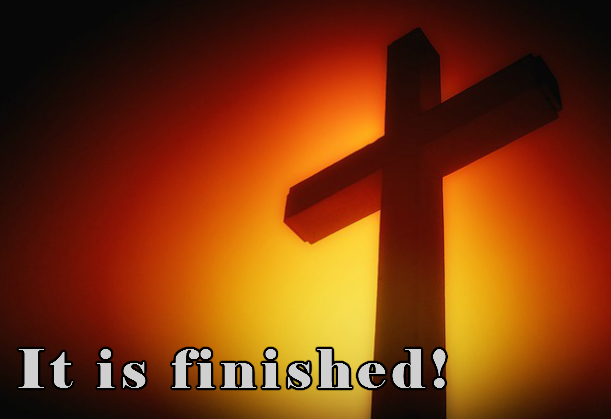 So they took Jesus, and he went out, bearing his own cross, to the place called The Place of a Skull, which in Aramaic is called Golgotha. There they crucified him and with him two others, one on either side and Jesus between them. Pilate also wrote an inscription and put it on the cross. It read, “Jesus of Nazareth, the King of the Jews.” Many of the Jews read this inscription, for the place where Jesus was crucified was near the city, and it was written in Aramaic, in Latin, and in Greek. So the chief priests of the Jews said to Pilate, “Do not write, ‘The King of the Jews,’ but rather, ‘This man said, I am King of the Jews.’” Pilate answered, “What I have written I have written.”

When the soldiers had crucified Jesus, they took his garments and divided them into four parts, one part for each soldier; also his tunic. But the tunic was seamless, woven in one piece from top to bottom, so they said to one another, “Let us not tear it, but cast lots for it to see whose it shall be.” This was to fulfill the Scripture which says,

“They divided my garments among them,
and for my clothing they cast lots.”

After this, Jesus, knowing that all was now finished, said (to fulfill the Scripture), “I thirst.” A jar full of sour wine stood there, so they put a sponge full of the sour wine on a hyssop branch and held it to his mouth. When Jesus had received the sour wine, he said, “It is finished,” and he bowed his head and gave up his spirit.

Since it was the day of Preparation, and so that the bodies would not remain on the cross on the Sabbath (for that Sabbath was a high day), the Jews asked Pilate that their legs might be broken and that they might be taken away. So the soldiers came and broke the legs of the first, and of the other who had been crucified with him. But when they came to Jesus and saw that he was already dead, they did not break his legs. But one of the soldiers pierced his side with a spear, and at once there came out blood and water. He who saw it has borne witness—his testimony is true, and he knows that he is telling the truth—that you also may believe. For these things took place that the Scripture might be fulfilled: “Not one of his bones will be broken.” And again another Scripture says, “They will look on him whom they have pierced.”

Jesus death on the cross was to atone for your sins and mine. Christ redeemed us from the curse of the law by becoming a curse for us. It is written, “Cursed is everyone who is hanged on a tree.” (Galatians 3:13) For our sake, He made Him to be sin who knew no sin so that in Him we might become the righteousness of God. (2 Corinthians 5:21)

The Romans led Jesus outside Jerusalem. This detail aligns with Law. The bloodshed for sin was carried outside the camp. (Leviticus 6:30; 16:27).

It was not a crucifixion that atones for our sins. Crucifixion was not an uncommon occurrence during Roman rule. This is evident by the fact the Romans crucified two others with Christ. Their death did nothing to atone for our sins. It was God taking our punishment. He was pure righteousness. He suffered the punishment of death so we could live.

We should always remember God used men’s wickedness to fulfill His purpose. God did not surrender His Son to wicked men. Everything was according to His will. Christ offered Himself as our sacrifice.

While we stand awe of God’s grace We must also consider God’s wrath against sin. True God is gracious to us. But God’s justice required payment for sin. There was a price for our sin. The price for sin is death. There was no other way to remove our sin. Only someone pure could atone for us. Only Christ was pure righteousness. The Son of God became a curse for us. God’s love for us was so great, He did not spare His only begotten Son. Amazing grace indeed!

It was not uncommon to place the crime above the head of one crucified. Pilate wrote “King of the Jews.” He rejected the request of the chief priests to change it to, “He claimed to be King of the Jews.” Pilate appears to have tired of dealing with the Jews. They had manipulated him into condemning an innocent man. And he was not going to put up with it anymore. His refusal was his way to retake control of the situation. Pilate involved the entire Jewish nation in the disgrace by leaving the title at it was.

Yet, God’s providence guided Pilate’s pen. Pilate did not intend to celebrate Christ as the author of salvation. But God did. Pilate published the title in three languages. It may have been a common practice. But by this God showed it was now time for the entire world to know Jesus was His Son.

There were four soldiers attending the crucifixion. They stripped Jesus naked. Then the soldiers divided his clothing. This was common in crucifixions. They stripped the accused to add to their shame and embarrassment. The Romans did everything in their power to make crucifixion as brutal as they could. The soldiers divided Christ clothing. But the tunic it was a single piece of cloth. So rather than ruin it by ripping it up they cast lots for it.

The other Gospel writers also describe the dividing of Christ garments. (Matthew 27:35, Mark 15:24; Luke 23:34) But John said this was to fulfill the scripture. The scripture John mentions is Psalm 22:18.

In this Psalm is David complains to God that he is exposed to his enemies. And when David uses the word garment, he uses it as a metaphor. He means all his processions. As a result, we may think John misapplied the Psalm.

But the Psalms are not restricted to David. This is evident from other writers use of many of the Psalms. For example, Psalm 22:22. It must refer to Christ.

There were several people watching Jesus dies on the cross. There was: Mary of Cleophas, Mary Magdalene, Jesus’ aunt, Jesus mother and the disciple Jesus loved. There may have been other. But John only mentions these five.

We are not to use our duty to God as an excuse to not perform our duty to other men. Our duty to God is paramount. (Matthew 10:41; Luke 14:26). But we should not forget there are two tables of the Law.

John passes over several of the details provided by the other Gospel writers and goes to the end. Jesus cried, “I thirst.” They offered him some sour wine. He said, “It is finished.” Then He died.

Arminius came to Protestantism to try to return the church to the errors of Rome. Armenians said we must add our faith to Christ works. Reformer said no. We add nothing to the work of Christ. While faith is the vehicle through which we receive God’s grace, that faith is not ours. Our faith comes from the Spirit. It was finished on Calvary. We add nothing to it.

John gives us yet another hint he is writing to non-Jews. Every Jew in the world who has ever lived knew the Sabbath was a high day. If John was writing to a Jewish audience he would not need to explain that.

Because the Sabbath was coming the Jews did not want the bodies on the cross on the Sabbath. They were scrupulous to take care of the small matters of the Law. But they did not care that they had condemned an innocent man. This is the way of hypocrites.

The chief priests had polluted the entire country with their wickedness. Yet God used their actions to carry out the greatest act in history. He provided for our salvation. And He insured the body of Christ remained unbroken.

They broke the legs of the robbers to hasten their death. But when they came to Christ they found Him already dead. To be sure they stabbed Him with a spear. This was not a prick. The soldier drove the spear all the way in and blood and water came out. Jesus was dead. And with His death, He purchased our salvation.