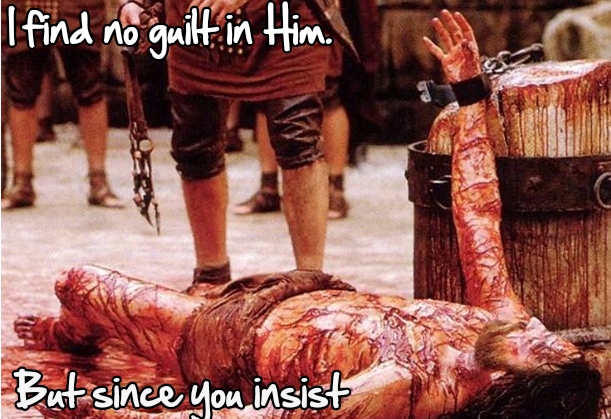 Then Pilate took Jesus and flogged him. And the soldiers twisted together a crown of thorns and put it on his head and arrayed him in a purple robe. They came up to him, saying, “Hail, King of the Jews!” and struck him with their hands. Pilate went out again and said to them, “See, I am bringing him out to you that you may know that I find no guilt in him.” So Jesus came out, wearing the crown of thorns and the purple robe. Pilate said to them, “Behold the man!” When the chief priests and the officers saw him, they cried out, “Crucify him, crucify him!” Pilate said to them, “Take him yourselves and crucify him, for I find no guilt in him.” The Jews answered him, “We have a law, and according to that law he ought to die because he has made himself the Son of God.” When Pilate heard this statement, he was even more afraid. He entered his headquarters again and said to Jesus, “Where are you from?” But Jesus gave him no answer. So Pilate said to him, “You will not speak to me? Do you not know that I have authority to release you and authority to crucify you?” Jesus answered him, “You would have no authority over me at all unless it had been given you from above. Therefore he who delivered me over to you has the greater sin.”

From then on Pilate sought to release him, but the Jews cried out, “If you release this man, you are not Caesar’s friend. Everyone who makes himself a king opposes Caesar.” So when Pilate heard these words, he brought Jesus out and sat down on the judgment-seat at a place called The Stone Pavement, and in Aramaic Gabbatha. Now it was the day of Preparation of the Passover. It was about the sixth hour. He said to the Jews, “Behold your King!” They cried out, “Away with him, away with him, crucify him!” Pilate said to them, “Shall I crucify your King?” The chief priests answered, “We have no king but Caesar.” So he delivered him over to them to be crucified.

Pilate tries again to appease the Jews. First, he offered to release Barabbas, who threaten their welfare, or Jesus. And they chose Barabbas. Next, he tries to scourge Jesus hoping that will appease them. Evil men are never appeased. Evil only grows within them. So once again Pilate fails.

The Father appointed Christ to die. But that does not excuse sin. Christ’s judge attests to His innocence. History records Pilate was a cruel governor. And we see why here. He was afraid. People react with cruelty when frightened.

The soldiers planted a crown of thrones on Jesus’ head and a purple robe around Him. This was no doubt authorized by Pilate to humiliate the Son of God. When he brought Christ out to the mob he could show his mockery of Jesus’ kingship.

But the soldiers went beyond want Pilate instructed. This is always the case with men. Men’s depravity is total. Once evil is given any quarter, men stretch it to its limit. Yet God directs all this.

Pilate had hoped seeing Jesus beaten and humiliated would satisfy the evil in the hearts of the Jews. It did not satisfy their evil. It caused it to grow.

Evil men twist and turn truth. In verse 7 the Jews claimed to live by the Law of Moses. Then in verse 15, they cry they have no King but Caesar. Men claim one path until their wicked desires are better served by another path.

The Jews were half right in accusing Christ. They stated the law. No man may assume any honor due to God. If they claimed what is God’s, they were to die. But their error was in the person of Christ. Christ is God. They drew a false conclusion from a true premise.

The misuse of scripture is rampant today. Many false teachers pick and choose scripture and draw false conclusions. The truth is men live by one standard, “I know what I want and I want it.”

When Pilate understood Jesus claimed He was the Son of God. It frightened him. If that was true, Pilate did not want any of the blame. He feared punishment for sacrilege. So, the first thing he does is go back and questions Jesus again.

Pilate asks Jesus where Jesus is from. Pilate is not asking about geography. He wants to know if Jesus is a god.

This time Jesus does not answer Pilate. But Jesus did not stand before Pilate to plead His case. Christ stood before Pilate to suffer condemnation. There was some risk Pilate may acquit Christ. Pilate had already declared he found nothing in Christ worthy of death.

Christ’s silence perplexed and angered Pilate. “You will not speak to me? Do you not know that I have authority to release you and authority to crucify you?” Christ’s response was to again remind Pilate who was in charge. The only authority Pilate had was an authority granted by God.

Jesus declared that Pilate is guilty of sin. But the Jews were more guilty. The Jews manipulated the governor, appointed by God. They manipulated him to follow their lawless demands. When politicians conform to mob rule, they do evil. But the mob is eviler. It is a monstrous sacrilege to pervert a holy ordinance of God for our own purpose.

From the time of the second interrogation, Pilate sought to release Jesus. But his fear of the mob held him captive. He lacked the integrity to do what he knew was right. The High Priest and Jewish rulers threaten to report Pilate to Caesar. They threaten to tell Caesar Pilate supported an insurrectionist.

Pilate’s main concern was maintaining the peace. Peace at all cost. But peace is never right at the expense of justice.

Pilate took the seat of judgment to sentence Jesus to death. Reading this account you get the feeling Pilate was an actor on a stage. He played the part under the direction of the high priest.

The different gospel writers appear to differ on the timing. Matthew, Mark, and Luke have Jesus hanging on the cross in the sixth hour. Plus they all agree that was the time darkness fell on the earth in the sixth hour. (Matthew 24:45; Mark 15:33 Luke 23:44) Mark says it was the third hour when they crucified Jesus.(Mark 15:25)

Only those who want to argue refuse to understand the easy explanation. Other passages explain what appears as a contradiction. First, the division of time during the day was not precise. The first century Hebrews divided the day into 4 parts. This was also true about the night. They divided it into 4 parts or watches. The gospel writers sometimes allotted only 4 hours to cover the entire division. Plus, they often drew the closing of one time period into the next. Second, the watches or time periods could be broken into smaller divisions. They referred to the larger watches and subdivision as hours. So an hour had more than one meanings. John tells us he is using “hour” to mean the subdivisions. He says that the darkness came between the sixth and ninth hour.

Regardless of knowing that was just, Pilate delivered Jesus up to be crucified.