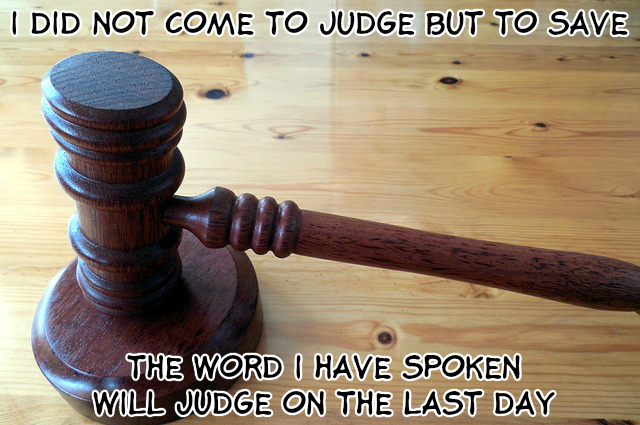 And Jesus cried out and said, “Whoever believes in me, believes not in me but in him who sent me. And whoever sees me sees him who sent me. I have come into the world as light so that whoever believes in me may not remain in darkness. If anyone hears my words and does not keep them, I do not judge him; for I did not come to judge the world but to save the world. The one who rejects me and does not receive my words has a judge; the word that I have spoken will judge him on the last day. For I have not spoken on my own authority, but the Father who sent me has himself given me a commandment—what to say and what to speak. And I know that his commandment is eternal life. What I say, therefore, I say as the Father has told me.”

These churches are very popular. I am sure there are several in your community. Like the Pharisee, they want a god who speaks by the means they prescribe. The word of God, i.e. the scripture, is not enough. They insist God speak in a personal message. They insist God speak through their emotions. Their god is not present unless they feel his presence. Rather than the true God who is omnipresent. Their god obeys their demands and desires. Rather than the true God who they are to obey.

They are not Christian. In fact, they are practical atheists. They ignore Christ when He speaks. If you ignore someone, you treat them as if they do not exist.

When Christ says whoever sees Him sees the one who sent Him. “Seeing” does not refer to physical vision. The word, “see,” in this context, means understand. This is an expression we use today. We say we see something meaning we understand it. e.g. “I see what you mean.” or “I see that.”

When we know Christ, the glory of God shines. It generates faith. Our faith does not depend on men or on ourselves. The foundation of faith comes from the eternal God.

Christ came into the world as the light. That is, He came so we may know the truth. Believing in Christ gives us light. To paraphrase Anselm, our belief allows us to understand. Our faith is not a blind faith. This is the type of faith required in business and science. This is the definition of a theory. If they make certain assumptions, they can explain how a system works. So, they conclude the assumptions must be true. Anselm said, “I do not seek to understand so that I can believe, but I believe so that I may understand.” Anselm is saying if he believes Christ, everything else makes sense.

Christ says here what He had said earlier. He did not come to condemn the world but to save it. This is the same message He gave in Chapter 3. (John 3:17) But do not breath to great a sigh of relief. Christ may not condemn us but if we reject the His words we are condemned. That is, we condemn ourselves. Those who have the message of salvation and choose to ignore it condemn themselves. According to Christ, the last judgment will be nothing but the ratification of the Gospel.

Christ pointed back to the Father as the source of His authority. He did so to not lessen the majesty of God. Men assume less of God when they see a man.

There is one lawgiver, God. There is only one who is able to save and to destroy, God. (James 4:12.) When churches try to bind men’s souls by their own inventions, it is a tremendous sacrilege. The men who do so, claim for themselves more than Christ did. Christ did not speak without a command from the Father.

But the good news is. Christ came and lived a perfect, righteous life. He died as a sacrifice for our sins. And His righteousness is now considered out righteousness. Repent and accept the gift of eternal life.