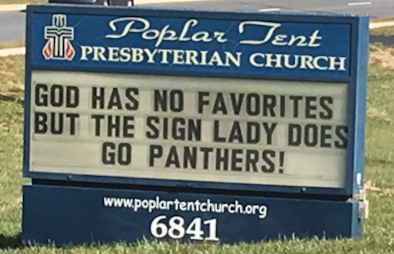 My brothers, show no partiality as you hold the faith in our Lord Jesus Christ, the Lord of glory. For if a man wearing a gold ring and fine clothing comes into your assembly, and a poor man in shabby clothing also comes in, and if you pay attention to the one who wears the fine clothing and say, “You sit here in a good place,” while you say to the poor man, “You stand over there,” or, “Sit down at my feet,” have you not then made distinctions among yourselves and become judges with evil thoughts? Listen, my beloved brothers, has not God chosen those who are poor in the world to be rich in faith and heirs of the kingdom, which he has promised to those who love him? But you have dishonored the poor man. Are not the rich the ones who oppress you, and the ones who drag you into court? Are they not the ones who blaspheme the honorable name by which you were called?

If you really fulfill the royal law according to the Scripture, “You shall love your neighbor as yourself,” you are doing well. But if you show partiality, you are committing sin and are convicted by the law as transgressors. For whoever keeps the whole law but fails in one point has become accountable for all of it. For he who said, “Do not commit adultery,” also said, “Do not murder.” If you do not commit adultery but do murder, you have become a transgressor of the law. So speak and so act as those who are to be judged under the law of liberty. For judgment is without mercy to one who has shown no mercy. Mercy triumphs over judgment.

If we were to read this, as many have, “You sin if you respect the rich,” this would be absurd. It is common courtesy and proper protocol to honor those whom the world has elevated. We are to respect and honor heads of state and or even a local dignitary. We all rise when the judge walks in the courtroom.

The answer is not at all difficult if you do not pick the pieces apart but look at the whole. James is not saying you are not to show honor to the rich or those in authority. James is saying we are not to dishonor the rich in a manner that insults or harms the poor. This is clear from the context.

Also, James condemns honoring the wicked because of respect of wealth. Anyone who honors the wicked dishonors the good. You are to discern and discriminate between good and evil. It is an evil form of judgment to discriminate only on externals. Such things as economic, racial or ethnic differences are external. They do not reveal the heart.

God has not chosen anyone based on economic or social standing. God chooses because He works all things according to the counsel of His will. (Ephesians 1:11) There is no free pass of the poor either. You are not saved by poverty. God redeems you according to His will by His grace, through faith He has given. (Ephesians 2:8) It is all God. In other words, God is no respecter of persons. Since you are His representative, you are not to show any favoritism either.

The world gives honor to the rich out of envy and in hopes of getting something in return. As a class, the rich use the envy of others to exploit the poor and needy with political and judicial power. Since they rely on wealth and power, as a class, they refuse to find redemption in Christ.

James reminds you of Christ words. Violating any point of the law makes you guilty of violating the whole law. James is not negating the biblical concept of gradation or evil. But, even the smallest sin is a serious offense against God. James is reiterating Jesus warning against having a superficial understanding of sin.

God shows mercy through His free choice. He is never under any obligation to show mercy. Mercy is His divine prerogative. He will show mercy to whomever He wills. (Exodus 33:19; Romans 9:15). James is repeating Christ teaching on the Sermon on the Mount. If you do not show mercy God will not show you mercy. “For if you forgive others their trespasses, your heavenly Father will also forgive you, but if you do not forgive others their trespasses, neither will your Father forgive your trespasses.” (Matthew 6:14) This passage immediately follows the Lord’s Prayer. In that model prayer is the line, “and forgive us our debts, as we also have forgiven our debtors.” (Matthew 6:12)