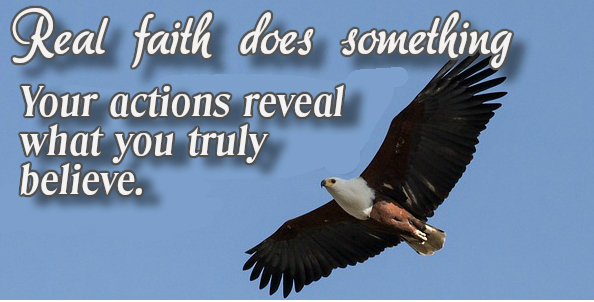 What good is it, my brothers, if someone says he has faith but does not have works? Can that faith save him? If a brother or sister is poorly clothed and lacking in daily food, and one of you says to them, “Go in peace, be warmed and filled,” without giving them the things needed for the body, what good is that? So also faith by itself, if it does not have works, is dead.

But someone will say, “You have faith and I have works.” Show me your faith apart from your works, and I will show you my faith by my works. You believe that God is one; you do well. Even the demons believe—and shudder! Do you want to be shown, you foolish person, that faith apart from works is useless? Was not Abraham our father justified by works when he offered up his son Isaac on the altar? You see that faith was active along with his works, and faith was completed by his works; and the Scripture was fulfilled that says, “Abraham believed God, and it was counted to him as righteousness”—and he was called a friend of God. You see that a person is justified by works and not by faith alone. And in the same way was not also Rahab the prostitute justified by works when she received the messengers and sent them out by another way? For as the body apart from the spirit is dead, so also faith apart from works is dead.

This passage was the passage Rome used to refute the reformation. The reformers asserted justification was by faith alone. Rome claimed they were wrong. And they used James to prove it. James says right here faith alone is dead. (v 17) Does this prove the reformers were wrong? Is justification by faith alone is incorrect? Well, as I have said before, Understanding James is a constant exercise in maintaining context. It is easy for us to take James out of context. This is just an extension of what James has written already, “Be doers of the word and not hearers only.” (1:22)

James is not talking about justification. James is talking about the fruits of a faith which justifies. That is, what is the evidence of a true faith?

James is not saying anything Jesus has not already said. “Blessed are the merciful, for they shall receive mercy.” (Matthew 5:7) And “For with the judgment you pronounce you will be judged, and with the measure you use it will be measured to you.” (Matthew 7: 2) We may lessen the severity of God’s judgment on us if we are kind to others.

When James says, “Can that faith save him,” that is, a faith without works. Here, James is talking about an intellectual faith. That is a mere knowledge of God. James points out that even the demons have that kind of faith. You believe in God? Great! All that does is qualify you to be a demon.

“You believe that God is one; you do well. Even the demons believe—and shudder!.” These two sentences show James is talking about the common knowledge of God.

James is speaking out against those who make a pretense of faith. They claim a faith they do not have.

Salvation comes through a union with the body of Christ. It is no wonder that James denies that salvation is connected to a faith like that. There is no such thing as a dead or inactive faith in Christ. As Paul says in 1 Corinthians 12:27, we are the body of Christ. Since our savior lives our faith must live.

Paul says we are justified by faith. (Romans3:28, 5:1; Galatians 2:16, 3:11, 3:24) By that, Paul means that by faith we are counted righteous before God. James has something else in view. To show that one who has faith actually has it, he proves the reality of that faith by works.

So actually the key to understanding the tension is not addressing “faith.” Rather we may understand it by examining the word “alone.” James is not saying works save us. James does not claim that at all. James agrees we are saved through faith. The question James is answering is, what kind of faith saves us. James answers that by saying a faith that is alive saves us. A dead faith is useless. A saving faith is one that is active with works. A saving faith is not a faith we “say.” It is a faith we “do.” We are saved by only by faith. But, that faith is not alone. As the Luther said, “We are saved by faith alone but the faith that saves is never alone.”