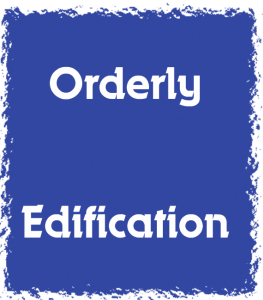 What then, brothers? When you come together, each one has a hymn, a lesson, a revelation, a tongue, or an interpretation. Let all things be done for building up. If any speak in a tongue, let there be only two or at most three, and each in turn, and let someone interpret. But if there is no one to interpret, let each of them keep silent in church and speak to himself and to God. Let two or three prophets speak, and let the others weigh what is said. If a revelation is made to another sitting there, let the first be silent. For you can all prophesy one by one, so that all may learn and all be encouraged, and the spirits of prophets are subject to prophets. For God is not a God of confusion but of peace.

As in all the churches of the saints, the women should keep silent in the churches. For they are not permitted to speak, but should be in submission, as the Law also says. If there is anything they desire to learn, let them ask their husbands at home. For it is shameful for a woman to speak in church.

Or was it from you that the word of God came? Or are you the only ones it has reached? If anyone thinks that he is a prophet, or spiritual, he should acknowledge that the things I am writing to you are a command of the Lord. If anyone does not recognize this, he is not recognized. So, my brothers, earnestly desire to prophesy, and do not forbid speaking in tongues. But all things should be done decently and in order.

Paul continues the theme that everything we do is to edify and build up others. Paul does not forbid the use of languages in the church in so far as they are an aid to teaching. For an example Hebrew and Greek may aid in teaching and understanding of the scripture today. But the question is why does Paul give a limit to the number of both prophecies and speaking in foreign languages? He limits it simply to keep those who are less skilful in teaching from preventing those who were better qualified from having time or opportunity to speak. Paul’s theme is in this section is the church should edify. But edification only occurs if there is order in the church. Therefore, those who are less knowledgeable should be quiet and learn from those with wisdom. It appears that Corinth was a very independent and individualistic culture everyone sought their “right” to speak and be heard.

Not only were the less knowledgeable and less wise to remain quite. What was spoken by anyone was not simply to be accepted as revelation from God. It was to be evaluated in light of the words of scripture. However not everyone is skillful in discerning right doctrine. The Church throughout history has been blessed with those who are skillful in judging, men who will not allow sound doctrine to be perverted by Satan’s impostors. When Paul says in verse 31 that all can prophesy, he does not mean all indiscriminately, but those who are endowed with the gift of prophesy. The spirit of the prophets are subject to the prophet, meaning that those who would teach must be teachable. No one is so overflowing in good doctrine that he cannot benefit from listening to others. Therefore good teachers must be students and scholars of each other.

Additionally, teachers can support and receive comfort from each other. When Moses received the word that others were prophesying and he should put an end to it, Moses responded that he wished all the people of God would prophesy. A burden was lifted from Moses when everyone wase not dependent on him alone for the prophesy.

Thirdly, the Lord’s prophet are not like pagans worshipers who are taken by a sudden frenzy. They are not driven by impulse or an unknown mysterious force where they are not longer in control of themselves.

Paul is not saying God’s word is to be evaluated and analyzed. Rather the man and his words. No man has a complete understanding of the will of God. Rather, God has distributed His Spirit to every believer in a particular manner. The body of Christ, that is the church as a whole, has the complete Spirit of God’. That is why Paul, in Romans 12:6, says prophecy should be regulated according to amount of faith. In the final analysis God and God alone sits in judgment of what is said.

God’s will and word is consistent coherent. God is not the a god of confusion. God is a god of peace. Whereever there is inclination to quarrel or fight, it is certain God is not reigning. This does not imply we are to allow bad doctrine to be preached and taught for the sake of peace. We are called to contend against evil doctrines. In our contending we must make the truth of God our aim not our pride or ambitions.

The office of teaching is an office of authority. It is impossible to be in authority and also in submission to authority at the same time. That is why Paul says a woman is to remain quite in church. But the actual speaking I do not believe is the point of what Paul is saying. In order to understand what Paul is saying we must not rip this it out of context. All of chapter 14 is about fact that we are to worship in an orderly manner.

First thing of note, Paul does not intend to shut women out from the opportunity to learn. He merely prescribes the method by which questions are to be asked. Secondly Paul does not intend to imply that husband have are expected to have all the answers. They are not prohibited from consulting the teachers if necessary. All husbands are not competent to give an answer.

I believe the key to understanding this section is in verse 23, “If, therefore, the whole church comes together and all speak in tongues, and outsiders or unbelievers enter, will they not say that you are out of your minds?” What is Paul’s concern in this verse. It is not rather or not to speak in tongues, It is about having and orderly service and so believers can be edified and unbelievers convicted.

Like it or not woman had the reputation or stigma of being chatter boxes. Talking to each other and all at the same time. That stigma continues to this day. It is the joke. “How do you get a spread a message, telephone. telegraph or tell-a-woman.” That may offend you but realize the allowing or not allowing women to speak is not the point. An orderly service is Paul’s concern.

The Corinthians were independent and individualistic. As a result they felt like they could bend God’s law to their culture. But Paul chastises them for this. “Or was it from you that the word of God came? Or are you the only ones it has reached?” We too believe that. We think all the history of church can be ignored. They lived in a different age. We are to interpret the bible according to “the modern age” How arrogant could we possibly be? This is not to say that we are to be bound to observe and worship exactly as the early church did. Paul did not bind himself to that standard. He did not impose on the other Churches the customs that were used at Jerusalem. However, we should realize that many smart spiritual men have lived before us. Christianity did not start within your lifetime.

I remember growing up in a church and if someone had an emotional experience they would have what was called a shouting spell. I also remember my grandparents bemoaning the fact that the church did not have as many shouting spells as they use to have. They longed for the Spirit to come on the church. The way they would know that the spirit came would be if someone would run up and down the aisles, waving a handkerchief and shouting WOOOOO!

Today Church services are designed to manufacture a modern version of the shouting spell. They have become rock concerts. People jump up and down and yell and scream. The church service (notice I deliberately do not call them worship services) are pure emotionalism. I believe Paul would have chastised both my grandparents generation and today’s generation. In neither case is anything learned. In neither case was anything of substance taken way. In neither case were believers taught and unbelievers convicted. In both cases it is the self and self experience which is elevated. In both cases people left on an emotional high. They did not leave knowing the true and living God.

On the one hand, we want to be different than the world. But we do not want to be condemned by the world. This passage is an example of how much we are like the Corinthians. We want to be weird enough to be attractive. We want the world to see us as mystical. But we don’t want to confront our culture’s belief system.

The perfect example is the paragraph where Paul talks about women in the church. We try to say this section is cultural and therefore can be ignored. It does not apply to us in a modern world. If it only has a first century cultural application. why did not God place it in scripture. “All Scripture is breathed out by God and profitable for teaching, for reproof, for correction, and for training in righteousness,” 2 Timothy 3:16

While the culture where the scripture is written must be understood and taken into account. That does not give us license to ignore scripture we because our culture does not like what it says. And our current culture definitely does not like the idea of women and men playing different roles.