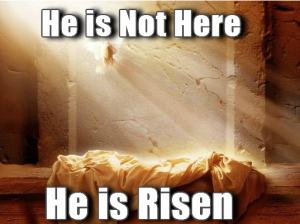 For I delivered to you as of first importance what I also received: that Christ died for our sins in accordance with the Scriptures, that he was buried, that he was raised on the third day in accordance with the Scriptures, and that he appeared to Cephas, then to the twelve. Then he appeared to more than five hundred brothers at one time, most of whom are still alive, though some have fallen asleep. Then he appeared to James, then to all the apostles. Last of all, as to one untimely born, he appeared also to me. For I am the least of the apostles, unworthy to be called an apostle, because I persecuted the church of God. But by the grace of God I am what I am, and his grace toward me was not in vain. On the contrary, I worked harder than any of them, though it was not I, but the grace of God that is with me. Whether then it was I or they, so we preach and so you believed.

Paul, having spent a great deal of time on our need to edify each other, now changes the subject to the resurrection. The Corinthians had been taught the truth but were not adopting a false belief. What was the exact nature of their belief is unclear. At this time in church history some held the idea that the soul is immortal, therefore there is no need for a physical resurrection of the body, and everything was spiritual. The Jewish sect known as Sadducees thought the only thing that existed was the present age. They thought the soul of man was simply a breath of wind. There was no substance to it. It is not certain how far the Corinthians has strayed from Paul’s teaching. Did they deny the resurrection of the body or was there no need for a resurrection because this age is all there is? It is probable that they were holding a belief that took them away from a hope in a future physical resurrection. They viewed it, as many do today, as simply allegorical or spiritual.

When Paul says “…unless you believed in vain.” he first chastises their fickleness because such a falling away indications they never understood the gospel he preached. Second he warns that they had needlessly and uselessly professed allegiance to Christ if they did not hold tightly to the doctrine of the resurrection.

Paul starts his proof for the resurrection with the fact that Christ died and was buried. Not only did Christ die, He died for our sins. Paul’s calls his first witness the scripture. Christ dies and rose from the grave according to the scriptures. Paul makes this same argument in Romans 4:25. Christ was “delivered up for our trespasses and raised for our justification.” Paul now brings forward eyewitnesses. He does not account for every witness. For example he does not mention the women.

First the Paul says Christ appeared to Cephas i.e. Peter then the twelve. This has caused some confusion because Judas, one of the original twelve, had already committed suicide. In addition, Matthisa had not yet been selected to replace Judas. There are several easy and plausible understandings as to what Paul intended here but the most straightforward is referring to the twelve is a way of addressing the group of Jesus’ inner circle.

When and where Christ appeared to 500 at one time is not known. Christ appearance to “all the apostles” appears to be a reference to Christ appearing to not only to the twelve but also to the disciples to whom Christ had assigned the office of preaching.

The fact that Christ appeared to so many indicates that the resurrection was an analogy it was real. It was physical. It was not simply a spiritual resurrection.

Paul ends this by talking about himself. Even though Paul claims much for himself, he is at the same time very humble. Of his own accord he admits he is not worthy, in fact the least worthy of all the apostles, of the grace he has received. It is not certain whether or not Paul’s enemies threw out the fact that Paul’s pedigree was not very good, in fact poor. If they did, Paul’s answer was, “They are right. My pedigree is not very good.” He has no authority on his own. Paul does not refuse to be considered the most worthless, low life in the world provided this contempt does not hamper in any way his ministry and does not detract from his doctrine.

There are those who set free will in opposition to the grace of God, may point to the passage, “His grace toward me was not in vain…” They would claim that God did His part now we must do our part to earn our salvation. They do not use the word “earn” but prefer the word receive. However, there is no other interpretation of their words. They do not give God wholly the glory for their salvation. Paul did not boast he had, by his own labor, taken care and preserved God’s grace. Paul’s corrected this possible misinterpretation when he says, “though it was not I, but the grace of God that is with me.”

Our hope is in the resurrection of Christ. Just as he rose he promises that we too will be resurrected. And live with him forever.

Who are you that we should listen to you? I am no one. I am unworthy. I am only presenting the words of one with authority. Along with Paul we can say, do not listen to anything I write or say because I am speaking. Listen only because of the authority of the one who owns the message. As long as we proclaim God’s word we do not speak on our own authority. We speak with true authority, God’s authority.