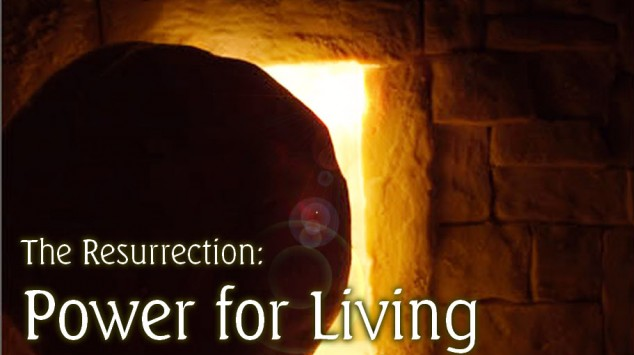 Otherwise, what do people mean by being baptized on behalf of the dead? If the dead are not raised at all, why are people baptized on their behalf? Why are we in danger every hour? I protest, brothers, by my pride in you, which I have in Christ Jesus our Lord, I die every day! What do I gain if, humanly speaking, I fought with beasts at Ephesus? If the dead are not raised, “Let us eat and drink, for tomorrow we die.” Do not be deceived: “Bad company ruins good morals.” Wake up from your drunken stupor, as is right, and do not go on sinning. For some have no knowledge of God. I say this to your shame.

Paul sets off to prove the resurrection of us all from the resurrection of Christ. Paul uses a very tight logical argument. He starts with the assumption the Corinthians were making, there is no resurrection. If there is no resurrection, Christ is not raised. If there are none there cannot be one. Christ’s resurrection is the foundation of Christianity. If Christ did not rise from the dead then all of Christianity is bunk! There is no forgiveness of sins. All of the preaching and teaching and witnessing will have been lies. And even worse we will have blasphemed against God, taken His name in vain, by saying He did something He did not do. The bottom line is, not only is our faith worthless, it is actually harmful because it causes us to sin even more.

Paul then takes his argument even further to expose the absurdity of denying the resurrection. If there is no resurrection there is no point to the suffering of this life. Our pains and losses do not bear any fruit. Everything we have done, accomplished, worked toward, hoped in, all dies when we die. If there is no resurrection then Paul would agree with Jean Paul Sartre who said, life is a useless passion. If the fruit of our faith is limited to this life, there is no meaning to anything. Christians are the worse of the lot because we keep trying to claim there is meaning. No resurrection, no ultimate meaning. Paul did not dream of Elysian field or fables but realized the entire hope of Christianity is looking forward to the final Day of Judgment.

If there is no resurrection, there are three reasons Paul says, “We are of all people most to be pitied.” Two of which apply to all Christians are all times. The third reason was peculiar to first century Christians.

Christians have in all ages fared worse for two reasons. First, while the Lord does chastise the wicked, He at the same time particularly chastises His own. He chastises us so that He may train us to be patient and obedient. He is preparing us for a true renovation. Second, even though some believers may have great earthly wealth and blessings, they do not go to excess i.e. they do not enjoy the world. Unbelievers on the other hand intend to take full advantage of their wealth and gorge themselves with every luxury.

There is a third reason Paul mentions they were to be pitied above all others that is peculiar to His time. At the time Paul wrote Christians were so hated and thought of as such an abomination, no one would take the title Christian without placing their life in jeopardy.

Because of Adam’s sin we all must die, just as Adam died. It follows then that Christ, who is the anti-type of Adam, came that He might restore everything that Adam ruined. Christ did not simply set an example but lived a sinless life died and paid the price for sin. Death could not hold Him as He had no sin. So too we, who are in Christ, will rise from the dead, for we have no sin. The righteousness of Christ has been imputed to us. Therefore death has no claim on those who are in Christ.

Well if death has no claim on the Christian just as it had no claim on Jesus. Why are all these Christian bodies rotting in the ground? Paul’s answer is that God has appointed an order to things. We can be satisfied that now we have Christ and His coming will be the time of our resurrection. Our life is still in His. So even though death resides in us it does not reign.

Being baptized for the dead is difficult to understand. Some believe what is referring to a practice which the early Church fathers condemned. The Corinthians held a custom that when someone suddenly died and was not baptized a living person could stand in for them and be baptized in their place at their grave. The belief is Paul was saying doing this makes no since if there is no resurrection. This is activity admittedly was a corruption of baptism and superstitious practice. These that hold this view will claim Paul is not addressing being baptized for the dead but resurrection. I believe this is an incorrect understanding.

Paul would have sharply condemned a sacrilege which polluted baptism and converted it into a magical ritual. He has not been shy about correcting the Corinthians in other areas. It is completely out of character for Paul.

From the writings of the early church fathers they condemned a superstition which crept into the church. People delayed baptism until the time of their death. This came from the idea that baptism was the instrumental cause of justification. That is, justification happened at the time of baptism. In order to be sure they would not sin and loose that justification they asked to be baptized just before they died. They were therefore, baptized for the dead since their baptism was of no value in this life. Paul asks if there is no resurrection what value does this or any baptism have, answer, none.

If all there is, is the present, there is no value in life. There is no purpose. This is not a philosophical argument. This has practical ramifications. The resurrection has impact for the here and now. It is not future pie in the sky. Paul asks why put up with all the misery of this world? Why should I struggle? If there is no resurrection there is no meaning to life. But the good news is there is a resurrection because Christ rose.