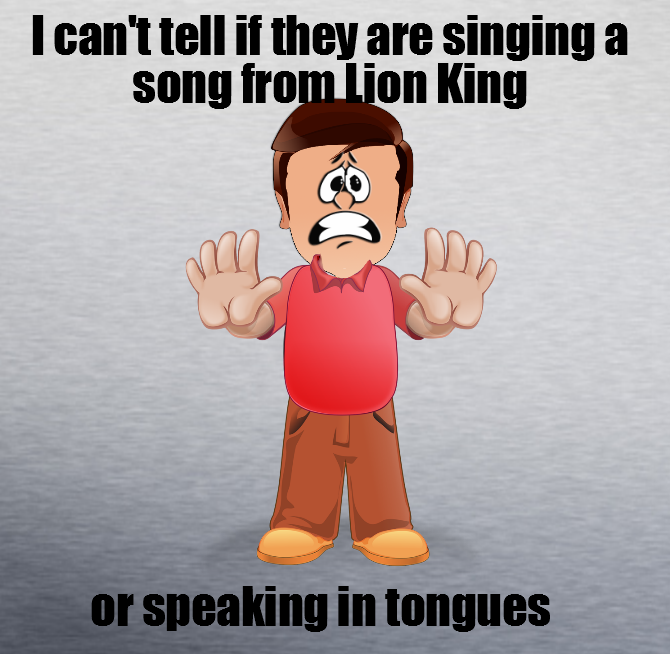 Pursue love, and earnestly desire the spiritual gifts, especially that you may prophesy. For one who speaks in a tongue speaks not to men but to God; for no one understands him, but he utters mysteries in the Spirit. On the other hand, the one who prophesies speaks to people for their upbuilding and encouragement and consolation. The one who speaks in a tongue builds up himself, but the one who prophesies builds up the church. Now I want you all to speak in tongues, but even more to prophesy. The one who prophesies is greater than the one who speaks in tongues, unless someone interprets, so that the church may be built up.
Now, brothers, if I come to you speaking in tongues, how will I benefit you unless I bring you some revelation or knowledge or prophecy or teaching? If even lifeless instruments, such as the flute or the harp, do not give distinct notes, how will anyone know what is played? And if the bugle gives an indistinct sound, who will get ready for battle? So with yourselves, if with your tongue you utter speech that is not intelligible, how will anyone know what is said? For you will be speaking into the air. There are doubtless many different languages in the world, and none is without meaning, but if I do not know the meaning of the language, I will be a foreigner to the speaker and the speaker a foreigner to me. So with yourselves, since you are eager for manifestations of the Spirit, strive to excel in building up the church.
Therefore, one who speaks in a tongue should pray that he may interpret. For if I pray in a tongue, my spirit prays but my mind is unfruitful. What am I to do? I will pray with my spirit, but I will pray with my mind also; I will sing praise with my spirit, but I will sing with my mind also. Otherwise, if you give thanks with your spirit, how can anyone in the position of an outsider say “Amen” to your thanksgiving when he does not know what you are saying? For you may be giving thanks well enough, but the other person is not being built up. I thank God that I speak in tongues more than all of you. Nevertheless, in church I would rather speak five words with my mind in order to instruct others, than ten thousand words in a tongue.
Brothers, do not be children in your thinking. Be infants in evil, but in your thinking be mature. In the Law it is written, “By people of strange tongues and by the lips of foreigners will I speak to this people, and even then they will not listen to me, says the Lord.” Thus tongues are a sign not for believers but for unbelievers, while prophecy is a sign not for unbelievers but for believers. If, therefore, the whole church comes together and all speak in tongues, and outsiders or unbelievers enter, will they not say that you are out of your minds? But if all prophesy, and an unbeliever or outsider enters, he is convicted by all, he is called to account by all, the secrets of his heart are disclosed, and so, falling on his face, he will worship God and declare that God is really among you.
Observation

We are to pursue love

Paul continues with the theme that edification of the church is the most valuable among the gifts. That is what is to be sought.

Paul is not saying that we should not exercise the gifts God has given to us. In fact he commends the pursuit of all gifts even the ones the Corinthians had abused. All the God given gifts have a place in the church. God has given them in support of the church. The fact that we abuse them is no reason for them to be discarded as meaningless or even dangerous. Paul does however; commend prophecy over all the gifts.

The Corinthians seem to exercise themselves more over the gift of tongues. This is probably more because it was showier then most other gifts. The context makes it clear that Paul is referring to the speaking of foreign languages. This is not the babble of “heavenly language” popular in the 1970s and 1980s Pentecostal movement.

If you are talking in a language no one understands. You are talking to yourself. You are not benefiting anyone. Whatever is done in the Church ought to be for the common benefit. That is why Paul makes only one exception to speaking in a foreign language in gathered worship. That exception is the presence of an interpreter. Only with the presence of an interpreter is the church edified.

Paul uses inanimate objects to illustrate his point. If the flutes or harps or trumpets give off muted and unknown sounds they would not be recognized. Whatever sound they made would have no discernible meaning. Therefore it is completely foolish for a man to say things that no one can understand. He will only be talking to himself so he might as well be quite. Paul’s view on the subject is quite clear. He think it is absurd and stupid.

The Corinthians were in pursuit of spiritual gifts. The apostle is saying we have only attained a gift that is truly praiseworthy when the Church benefits from your gift. Our purpose as followers of Christ is to exalt Christ and see His kingdom enlarged daily.

We worship and serve Christ with our whole being. Paul then goes on to make an illustration by analogy. He is not making a supposition that is not reality. If a prayer is made by a person in language that even he does not understand, the mind and the spirit are separated. Our mind is not participating. Babbling in this manner does no one any good.

Therefore we are to pray in a language that we understand and the Spirit supplies us with the words. If we don’t understand the words our minds will wander off or at the very least not participate in the prayer.

When someone utter a public prayer in the name of the people yet the words are unknown or un discernable to the people, how can the congregation express their agreement. There is no fellowship in prayer unless we are united in one mind. The same applies to blessing and giving thanks to God.

The highest purpose is to edify the church. That is why Paul says hyperbolically that he would rather say 5 words that provide instruction than 10,000 words in a language no one understands. By this Paul rebukes those who would show off with empty talking and meaningless words.

Paul’s comment “Brothers, do not be children in your thinking,” is a reference back to chapter 13 when we says he behaved as a child when he was a child and he put away childish thing when he became a man. It is necessary to guard against childishness, that is, the word of God is heard with our ears but no fruit is produced. When we reject Godly instruction and teaching and would rather stand amazed at in indistinguishable sound, we are behaving like a child.

In case the respond to behaving childishly is that elsewhere scripture commend being children (Matthew 18:4) Paul has a simply and straight forward reply. We are to be children in malice and evil. But when it comes to understanding we are to be mature. It is completely shameful that so many believers see ignorance as godly.

Speaking in foreign languages is a sign to unbelievers as it is a mean of evangelism. They hear the gospel in language they understand. Languages are not a sign to believers. Believers need to be edified.

We mock God to claim that our intention is sufficient or acceptable service to Him. We can recite prayers in Latin as if the words themselves were magical. Meanwhile our minds wonder off. We are thinking about what we will have for lunch.

When we try to be spiritual by doing religion we fail. We are spiritual when we server, help, buildup and encourage others.