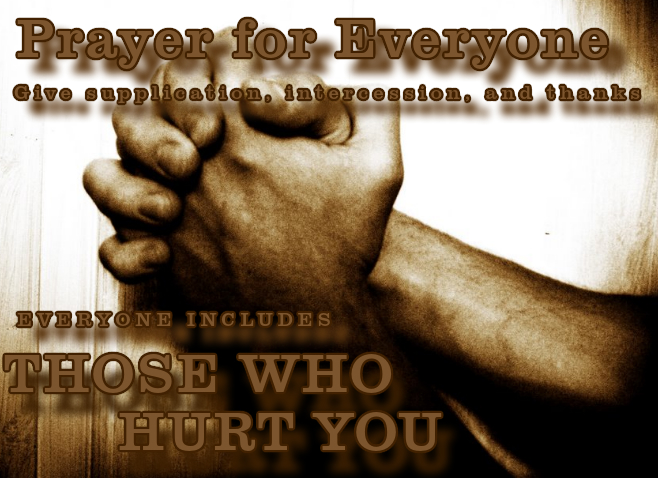 First of all, then, I urge that supplications, prayers, intercessions, and thanksgivings be made for all people, for kings and all who are in high positions, that we may lead a peaceful and quiet life, godly and dignified in every way. This is good, and it is pleasing in the sight of God our Savior, who desires all people to be saved and to come to the knowledge of the truth. For there is one God, and there is one mediator between God and men, the man Christ Jesus, who gave himself as a ransom for all, which is the testimony given at the proper time. For this I was appointed a preacher and an apostle (I am telling the truth, I am not lying), a teacher of the Gentiles in faith and truth.

I desire then that in every place the men should pray, lifting holy hands without anger or quarreling; likewise also that women should adorn themselves in respectable apparel, with modesty and self-control, not with braided hair and gold or pearls or costly attire, but with what is proper for women who profess godliness—with good works. Let a woman learn quietly with all submissiveness. I do not permit a woman to teach or to exercise authority over a man; rather, she is to remain quiet. For Adam was formed first, then Eve; and Adam was not deceived, but the woman was deceived and became a transgressor. Yet she will be saved through childbearing—if they continue in faith and love and holiness, with self-control.

Paul starts with the word “therefore.” To put it in proper context we need to back up to chapter 1. Paul concludes that chapter with: “This charge I entrust to you, Timothy, my child, in accordance with the prophecies previously made about you, that by them you may wage the good warfare, holding faith and a good conscience. By rejecting this, some have made shipwreck of their faith…” Paul is saying since you are to wage a good warfare you are to pray. His prayers are to be for everyone and by the way everyone includes kings and those in high positions. Then Paul says we are to do this so we may live a quiet and peaceful life.

Christians are not revolutionaries. Christians are not in opposition to the political leaders. Paul never went looking for a fight. Yet, riots and battles often found him. The Christian desires to live a quiet peaceful life while showing others the gospel.

Paul then mentions kings and other rulers. The reason he mentions these is at that time magistrates were sworn enemies of Christ. So, it would be easy to either ignore them in prayer or to pray for their destruction. Paul says give supplications, prayers, intercessions, and yes even thanksgivings for them. It may be difficult to be thankful for the president, but we are to do so. The depravity of man is not a reason to ignore God’s law of love.

God told the Jews excelled in Babylon: “Seek the welfare of the city where I have sent you into exile, and pray to the Lord on its behalf, for in its welfare you will find your welfare.” (Jeremiah 29:7)

We should desire the continuance and peaceful condition of the governments God has appointed. That is the universal doctrine. Why should we do this? Paul sets forth a simple but powerful argument. It pleases God. God wants everyone saved. What could be more reasonable than our prayers should conform to the God’s will?

God invites all to salvation. That is why he invites all to acknowledge His truth. The gospel “is the power of God for salvation to everyone who believes.” Romans (1:16) It is clear God invites all those to whom He addresses with the gospel to the hope of eternal life. In short, the calling is proof of God’s secret election. God makes them partakers of His gospel. God admits them to salvation.

Those who oppose the idea of God’s predestination point to this verse as a proof. They say, if God desires everyone to be saved, He will not elect some and leave others to perish. That argument might carry some weight if God saved all mankind. But scripture makes clear that most are condemned to destruction. e.g. “Enter by the narrow gate. For the gate is wide and the way is easy that leads to destruction, and those who enter by it are many. For the gate is narrow and the way is hard that leads to life, and those who find it are few.” (Matthew 7:13-14) God’s desire that everyone be saved is only His benevolent nature.

There is only one God. There was a diversity of views of gods, in the first century as well as today. That diversity only existed among men not God. God is one. He is the God of the Jews and the gentiles. There is only one mediator between God and man, Jesus Christ. While it may not be popular to say, there is only one. God in His grace provided a way. The question is not, “Why not more ways?” The question is, “Why even one way?” God provided the one mediator, the man Jesus.

When Paul talks about women’s dress and behavior, it is so easy to rip it from its context. We can tear it from both its historical context as well as its immediate context. Paul instructed men to lift up pure hands in prayer. In this part of the letter, he is talking about pray and living quiet and peaceful lives. How do we do that? A characteristic of the Greco-Roman society was opulence and excess. Christians are not to be like that. We are to have pure hands and not draw attention to ourselves. We are to point to Christ.

Christian women are not a special class of Christians. A woman does not have greater or less status. The lesson Paul is giving us is how we are all to live. “Let a woman learn quietly and with all submissiveness.” Elsewhere Paul says we are to submit to each other, Ephesians 5:21. The Christian life is about submission. We submit to Christ by submitting to each other.

Why does Paul only mention women here? Timothy is in Ephesus an affluent city where women dressed in extravagance. The vice is the desire to draw attention to one’s self. So, the principal Paul is teaching applies to both men and women. We are not to draw attention to ourselves. We are to point to Christ.

When Paul says women are not to teach, he is not talking about them teaching their own families. Paul is only referring to public teaching.

To establish the proper role of women in church government Paul appeals to creation. Paul restricts women from teaching and exercising authority over men. The Greek word for authority only appears here in the New Testament. It is probable Paul is referring to some level of judicial or governing authority.

This is one of the passages that the western culture rebels against. We believe in equality of men and women. In doing so, we often confuse equality with roles. To borrow from Paul if the whole body were an eye how would we hear? Because we do not play the same roles does not mean one is greater than another. It does not mean one role is greater than another. It means we play different roles. All roles need to be played.

We fight and struggle with this only because we are sinful and resist the law of God.