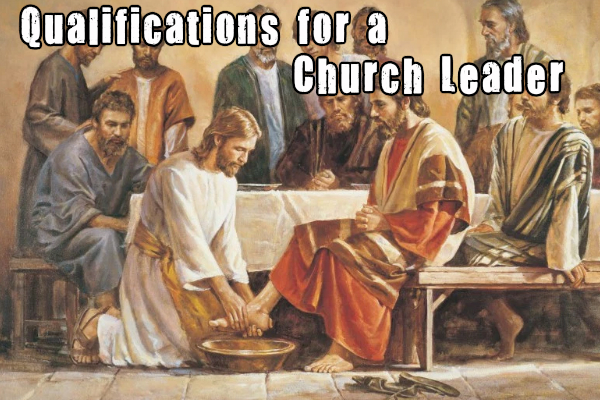 The saying is trustworthy: If anyone aspires to the office of overseer, he desires a noble task. Therefore, an overseer must be above reproach, the husband of one wife, sober-minded, self-controlled, respectable, hospitable, able to teach, not a drunkard, not violent but gentle, not quarrelsome, not a lover of money. He must manage his own household well, with all dignity keeping his children submissive, for if someone does not know how to manage his own household, how will he care for God’s church? He must not be a recent convert, or he may become puffed up with conceit and fall into the condemnation of the devil. Moreover, he must be well thought of by outsiders, so that he may not fall into disgrace, into a snare of the devil.

Paul is introducing a new topic in his letter to Timothy. He does so by a technique which he uses often the phrase: “The saying is trustworthy.” Paul now begins to tell Timothy how to appoint pastors and governing officials in the church. There is a tie to what he has just written in that Paul has instructed Timothy that women are not to teach in public. Here, Paul has excluded women from serving as a church elder. Yet Paul also makes clear just being a man does not qualify a person to hold these offices. Paul is reminding Timothy to be careful and sober-minded in the selection of elders.

Aspiring to be an elder is aspiring to a noble task. Noble tasks are difficult otherwise, they would be common tasks. Anyone who aspires to be an elder must realize they are seeking a job that is not easy. It is wrought with danger. It is laborious and just plain hard. So, those who desire the job of elder should consider their abilities and stamina. They will be carrying a heavy load. The ignorant and rash plunge headlong into this task.

Because the church teaches humility, it is often assumed that it is wrong to desire the office of elder. This is not true. God calls men to this office. It is not improper that we should desire the calling to which God has called us. Paul censures a rash desire to be an elder. Yet, at the same time, he permits the desired so long as it is with prudence and modesty.

Paul says the first qualification of an elder is that he is blameless. This qualification, if taken in an absolute sense, would disqualify everyone from the office. There are flaws found even in the sanctified men. It is one thing to have common flaws that do not harm a man’s reputation. It is another to have a disgraced name. So that an elder may have moral authority Paul instructs Timothy to select men of good reputation.

There has been some debate about what Paul intended when he said an elder must be the husband of one wife. Could a remarried man serve as an elder? This answer is not hard if we look at what Paul said and when he did not say. “An overseer must be above reproach, the husband of one wife.” Paul says “must be” current tense. He did not say “must have been” Paul uses the present tense. Paul is condemning polygamy in an elder.

Some have argued that the prohibition on polygamy only extends to elders. The response to this is simple. In the context, Paul is only talking about elders. To conclude the general Christian may take part in polygamy ignores the context. Paul is talking about the qualifications of an elder. This is not a discussion of polygamy. This is not a discussion of sin in general.

An elder is to be sober minded. Paul is saying an elder must conduct himself with decency and propriety.

An elder is to be hospitable. The hospitality spoken about here is hospitality toward strangers. In Paul’s time, it was considered disgraceful if a respectable or well-known person had to stay in an inn. That is not true today. The elders sheltered exiles in their homes. In hard times, the church must provide aid and lodging for those in need. The elders must provide the example to the rest of the church.

An elder must be able to teach. Paul is not talking about being eloquent. There are many dynamic speakers who do not convey the word of God. Paul is saying an elder must contain the wisdom of God and then be able to communicate and instruct others with it.

An elder must not be addicted to wine. The word Paul uses where indicates not simple drunkenness but intemperate wine guzzling.

An elder is not violent but gentle and not quarrelsome. Violence occurs in many ways. It is not only physical. It is often inflected with the tongue. Slander is violence to a man’s character. In some ways, slander is even more harmful. Physical bruises will heal but a man may never recover from a bruised character. A violent person refers to with threats as well as physical damage.

An elder must manage his own house well. Paul destroys any idea that priests, bishop or any other type of elder are to remain celibate. They are to experience life as any other man. They are to be husbands. They are to have a household. They are to have children. Experiencing ordinary life and normal human interactions best trains one to govern the church.

The church is a family. It is a diverse family. An elder must learn to govern a simple family first. This is an argument for the lesser to the greater. We are to practice on the simple task before taking on complex tasks. The challenges of governing a church are complicated. It is a diverse and complicated family.

There may be men who come to faith with great administrative skills. They may run multi-billion dollar corporations. Yet Paul warns against placing them in charge of the church. Many of the skills in managing a large organization are used in governing the church. But for the sake of the new convert do not place him in a position of this type of leadership. They can become proud and fall prey to the condemnation of the devil.

The devil may be interpreted as Satan or as slanderers. The judgment of Satan may be that he may fall by his pride into the same condemnation as Satan. Or we could give Satan an opportunity to accuse him by placing him in a position too soon. Either understanding is valid.