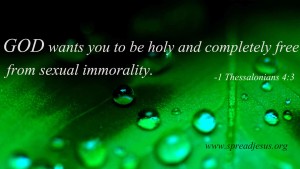 “All things are lawful for me,” but not all things are helpful. “All things are lawful for me,” but I will not be dominated by anything. “Food is meant for the stomach and the stomach for food”—and God will destroy both one and the other. The body is not meant for sexual immorality, but for the Lord, and the Lord for the body. And God raised the Lord and will also raise us up by his power. Do you not know that your bodies are members of Christ? Shall I then take the members of Christ and make them members of a prostitute? Never! Or do you not know that he who is joined to a prostitute becomes one body with her? For, as it is written, “The two will become one flesh.” But he who is joined to the Lord becomes one spirit with him. Flee from sexual immorality. Every other sin a person commits is outside the body, but the sexually immoral person sins against his own body. Or do you not know that your body is a temple of the Holy Spirit within you, whom you have from God? You are not your own, for you were bought with a price. So glorify God in your body.

Paul’s response is yes, all things are lawful. Yes, we have been freed from the law. Yes, God loves me just as I am. I do not need to change in order for God to love me. However, the Corinthians perverted it. Just as we pervert it today. Paul qualifies the saying that, “All thing are lawful of me.” The way Paul qualifies it he negates it. All things are lawful. But they may be harmful or hurtful. Therefore, don’t do them! God loves me just the way I am. But the way I am is harmful and hurtful. Therefore, change! Paul then states very clearly the purpose of our life and why God has given us a body. We are meant for God.

Paul then suddenly turns to the idea of the resurrection, “and will also raise us up by his power.” This is probably because of the influence of Greek thought. Plato and others Greek thinkers saw the material and the body as imperfect shadows of the spiritual world. The body was impure and imperfect. Since the body was contemptible, there could be no bodily resurrection. With such a perverted view, some Corinthians regarded all sexual relations as inherently sinful. Since sex is performed through the body, sex could not be right. Others took the same philosophy and came to the opposite view. Since the body did not matter they could be as promiscuous as the pleased.

This philosophy also led to the heresy, Docetism. Docetism stated since Christ was holy he could not have had a body. Therefore, Christ’s life and resurrection was only spiritual. This view denys the humanity of Christ.
Paul then says we are united with Christ. There is not only a spiritual union but our whole body is united with Christ. This doctrine is one of the fundamental teachings of Paul. The Corinthians were wrong to think that they could be united with a prostitute and it not affect their relationship with Christ. Our relationships matter.

What Paul means when he says, “Every other sin a person commits is outside the body, but the sexually immoral person sins against his own body.” is not clear. There appear to be several other sins that are against the body, drunkenness, and drug abuse are a couple that quickly come to mind. But it is clear that Paul is teaching sexual immorality has special consequences because of our unity with Christ. Paul expresses the prohibition against sexual immorality the same way he expresses the command against idolatry. (Flee sexual immorality 1 Corinthians 6:18 and Flee idolatry 1 Corinthians 10:14)

We live in a world today where sexual immorality is abundant. In fact, to even suggest that premarital, extra-marital, or homosexual sex is wrong brings a quick and stern condemned. Sexual freedom is considered a basic human right. The phrase, “It doesn’t mean anything. It’s just sex,” could not be more wrong. What is clear in this passage is that, what we do sexually affects our relationship with Christ. We are joined to Christ not only spiritually. We are joined to Christ with our whole being.