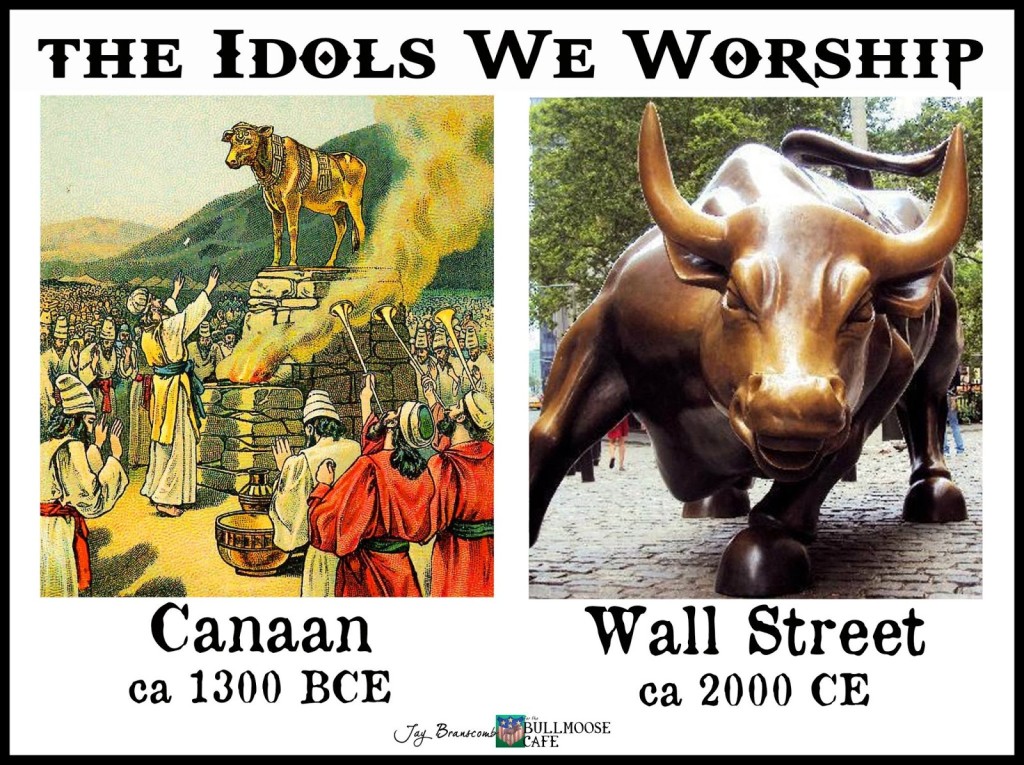 Now these things took place as examples for us, that we might not desire evil as they did. Do not be idolaters as some of them were; as it is written, “The people sat down to eat and drink and rose up to play.” We must not indulge in sexual immorality as some of them did, and twenty-three thousand fell in a single day. We must not put Christ to the test, as some of them did and were destroyed by serpents, nor grumble, as some of them did and were destroyed by the Destroyer. Now these things happened to them as an example, but they were written down for our instruction, on whom the end of the ages has come. Therefore let anyone who thinks that he stands take heed lest he fall. No temptation has overtaken you that is not common to man. God is faithful, and he will not let you be tempted beyond your ability, but with the temptation he will also provide the way of escape, that you may be able to endure it.

Therefore, my beloved, flee from idolatry. I speak as to sensible people; judge for yourselves what I say. The cup of blessing that we bless, is it not a participation in the blood of Christ? The bread that we break, is it not a participation in the body of Christ? Because there is one bread, we who are many are one body, for we all partake of the one bread. Consider the people of Israel: are not those who eat the sacrifices participants in the altar? What do I imply then? That food offered to idols is anything, or that an idol is anything? No, I imply that what pagans sacrifice they offer to demons and not to God. I do not want you to be participants with demons. You cannot drink the cup of the Lord and the cup of demons. You cannot partake of the table of the Lord and the table of demons. Shall we provoke the Lord to jealousy? Are we stronger than he?

Paul is making the case that all worship, other than of Trinity is demonic. That is, we do not all worship the same God in different ways. To worship Ra, Allah, Brahma, Shiva, Zeus, and/or the earth is to worship a demon.

Paul begins this passage by looking back to the exodus from Egypt and what happened to the children of Israel in the wilderness. He points out the Israelites were the people of God. Today, the Church has expanded Israel as the people of God. They were all blessed with the same blessing. We all receive the same blessing of salvation from God. Even so, they did not escape the punishment of God. If God did not spare them, He will not spare us.

During the exodus they went through a baptism and a sacrament that corresponded to the Lord’s Supper. They were baptized in the cloud and the sea. They drank the water from the rock which was Christ and ate the bread. We today celebrate the Eucharist with the blood and body of Christ as wine and bread.

Paul’s intention here is the ancient people of God were honored with the same benefits we are. They partook the same sacraments. Therefore, when we sin, we should not imagine we are exempt from the punishment they endured. The sacraments will not save us.

What happened to the ancient people of Israel serves as an example to us. They received the benefits to the covenant. They received blessings from God but refused to honor Him as God and were,therefore, destroyed.

It is interesting that Paul, in verse 7, mentions that the Israelites, sat down and eat and rose up to played rather than talking about the actual worship of idols. Why would the Apostle mention the feast and the games, rather than of adoration of idols? After all worship is the main thing in idolatry. The feast and games were simply ancillary.

The reason Paul mentions the feasts and games was this best suited the case of the Corinthians. For it is unlikely they went to the temples to prostrate themselves before idols. However, they did partake of the feasts, held in honor of these false deities. They did not keep at a distance from the debase ceremonies, which were tokens of idolatry. The Gentiles honored their idols with feast and the playing of games. Paul then had a good reason to declare their particular form an offense and expressly condemned by God. No part of idolatry can be touched without polluting soul. Those who defile themselves with even tokens of idolatry will not escape punishment from God.

Paul says all that happened to the people of Israel was written down so we could learn from it. When Paul says, the end of the ages has come; it is not a reference to the end of time, or the end of the world. The great promises of the Old Covenant were initiated by the coming of Christ. The end of the age of waiting for the promises to be fulfilled has come. Paul is helping the Corinthians, and us, realize the events in the Old Testament looked forward as well as apply to the time in which they were written.

The apostle reminds the Corinthians that they cannot take any glory in their accomplishments, or even their progress. Thinking they are doing alright is dangerous. As soon as they think like that, they will fall. This is also a warning for us. Churches and individual Christians simply assume God will continue to bless us. After all we are the elect! We are the favored ones. Sorry. The example given from the ancient people of Israel was given as a warning to us.

Verse 13 is my favorite verse in the Bible. I believe Paul put it here because after hearing such awful warnings about the wrath of God it serves as a comfort. Verse 13 simply states that from a practical standpoint there is nothing that can harm you. First, you are not unique. All your hardships are is common experiences. Second, God is not going to allow anything to happen or temp you that you cannot withstand. Third, God provides a way to endure for all our temptations. Therefore this verse of comfort is also a rebuke. If God keeps us from temptations greater than we can stand, we cannot use our temptations as an excuse for sinning.

I find verses 14 and 15 humorous. Paul could be paraphrase as this. “Since God has provided a way to escape from idolatry, run! Why wouldn’t you run? Are you stupid!?!”

What Paul says next about the Lord’s Supper demonstrates the significance of taking part in this distinctively religious meal. It is naive for the Corinthians to think they can participant in temple feasts without being involved in idolatry.

Even though idols are nothing and have no power, behind them is the reality of Satan.

The Israelites were chosen by God. They were protected by God. They were loved by God. They knew this and they presumed upon God. Since they were favored by God, they presumed God would never punish them. Wrong! In addition to being merciful and loving God is also just. God is a jealous God. When the Israelites started worshiping idols, when they thought more of their own lust and pleasure than they did God, when they decided to test God to see if He was really there and really cared, God destroyed them. Many churches today are just like the children of Israel. Worship services are about what kind of music WE like. Worship is about making the atmosphere inviting to those outside the church. That is, we are trying to get people to worship services that have no desire to worship. As a result out church service are only services. They are no longer worship services.

We have sermon series on sex, marriage, child raising, improving self-esteem and overcoming setbacks. All these problems go away if we understand God’s will and live according to it. Marital problems simply melt away. We raise our children to know the will of God. There is no problem with self-esteem because the self is nothing and Christ is everything. There are not problems overcoming setbacks because we accept the sovereignty and providence of God.

Most evangelical churches today are preaching self-reliance rather than reliance on Christ. It has reached the point where many in the church do not even know what the gospel is.

While seeking out a church in my area that actually preached the gospel, I listened to a lot of online sermons. A friend of mine suggested I check out his church. I listened to several sermons. The preacher was dynamic entertaining and even educational. But he did not preach the gospel.

When my friend asked me what I thought, I told him I did not hear the gospel preached. He was offended and said the pastor preached the gospel every Sunday. So I challenged him to listen to the upcoming Sunday sermon and tell me if the gospel was preached. That Sunday the pastor gave the sermon. As he preach he painted a dire picture of the human condition. I thought to myself “I am going to have to eat my words. The only way out of this situation is the cross.” Wrong! The pastor’s solution was not to rely on Christ. It was not to draw closer to Him. It was to try harder. In other words it was all up to me. That is not good news. That is terrible news. His solution was exactly what caused God to destroy some of the people of Israel, reliance on someone or something other than God.

Paul says the example of the people or Israel serves as a warning for us so we do not fall into the same trap. Yet, how strange it is, we do not know God well enough to even recognize the people of God.