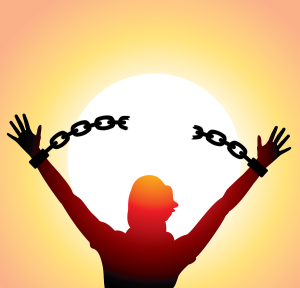 So, whether you eat or drink, or whatever you do, do all to the glory of God. Give no offense to Jews or to Greeks or to the church of God, just as I try to please everyone in everything I do, not seeking my own advantage, but that of many, that they may be saved.

Be imitators of me, as I am of Christ.

Paul returns to the rights of Christians and Christian liberty. Eating meat that was sacrificed is an outward thing, and, therefore, it is lawful in itself. Paul does not call that into question. What Paul says is this. We must temper our action with regard to edification. He adds no one is to seek his own advantage exclusively. If anything is not helpful to others, we must abstain from it. When we are concerned about other’s edification our liberty is rightly limited.

When Paul says we are not to seek our own advantage he is addressing the same subject he addressed in Romans 14. We are to try to please others and edify them. We are, by nature, so corrupted that everyone consults his own interests, regardless of need and interests of others. The law of love requires us to love our neighbors as ourselves. (Matthew 22:39) It requires us to consider their welfare. We are not forbidden to consult our own interests but we are required to be so devoted to the interest of others to forego our rights.

“The earth is the Lord’s and the fullness thereof.” Paul goes back to the David in Psalm 24:1. There is nothing on earth that does not belong to God. Therefore, there is nothing in the world that is not sacred. We must always keep that in view. We may question rather something is corrupted or polluted by the actions of wicked men, Paul tells us, they are not. The whole world remains in the hands of God. The children of God have full use of everything because they received it from God.

Paul then outlines an exception to this rule. If you are told that something has been used for wickedness then abstain, not because it is impure, because the greater value is the conscience of the brother who told you.

The logic of this is that your liberty is constrained by another’s conscience. In fact, your liberty is constrained by the weakest of the brethren. Paul acknowledges this. We are free but we constrain ourselves for the sake of the weaker brother. We are to bear with the weak conscience of our brother, that we may not abuse our rights and offend him. In the meantime, our conscience remains free, because it is exempt to the subjection.

Why should you limit your liberty just because you might offend someone? Paul answers that with, “So, whether you eat or drink, or whatever you do, do all to the glory of God.” Everything we do is to bring glory to God. If we cause a weaker brother to stumble he is not bringing glory to God. Therefore, by extension, we have not brought glory to God.

This passage has been misapplied many times. On one extreme, Paul is not saying to violate the law of God. On the other extreme, many have ignored Paul when he said, “Give no offense to Jews or to Greeks or to the church of God.” We should also take into account what Paul said in 9:22b “I have become all things to all people, that by all means I might save some.”

Weaker brothers, while trying to be helpful, become legalist making rules which do not appear anywhere in the word of God. They establish these rules to help us follow God’s law.

If a weaker brother believes playing cards or drinking alcohol is of the devil, we should not partake in their presence. However, that does not mean that we should restrain ourselves in the presence of non-believers. The man made rule can become a stumbling block to the non-believer. “I have become all things to all people, that by all means I might save some.”

We need to obey God’s law. We have liberty with man-made laws. But we must not abuse that liberty.