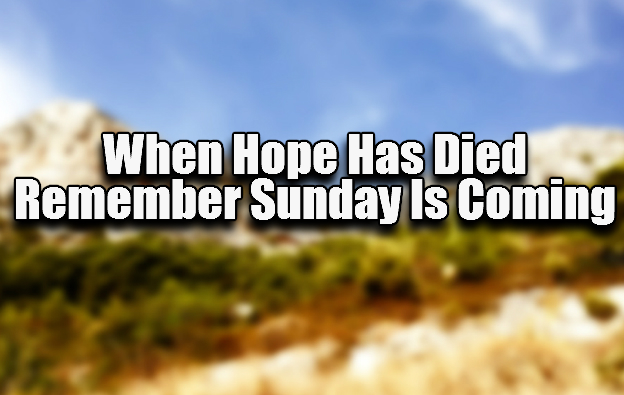 And when the sixth hour had come, there was darkness over the whole land until the ninth hour. And at the ninth hour Jesus cried with a loud voice, “Eloi, Eloi, lema sabachthani?” which means, “My God, my God, why have you forsaken me?” And some of the bystanders hearing it said, “Behold, he is calling Elijah.” And someone ran and filled a sponge with sour wine, put it on a reed and gave it to him to drink, saying, “Wait, let us see whether Elijah will come to take him down.” And Jesus uttered a loud cry and breathed his last. And the curtain of the temple was torn in two, from top to bottom. And when the centurion, who stood facing him, saw that in this way he breathed his last, he said, “Truly this man was the Son of God!”

There were also women looking on from a distance, among whom were Mary Magdalene, and Mary the mother of James the younger and of Joses, and Salome. When he was in Galilee, they followed him and ministered to him, and there were also many other women who came up with him to Jerusalem.

And when evening had come, since it was the day of Preparation, that is, the day before the Sabbath, Joseph of Arimathea, a respected member of the council, who was also himself looking for the kingdom of God, took courage and went to Pilate and asked for the body of Jesus. Pilate was surprised to hear that he should have already died. And summoning the centurion, he asked him whether he was already dead. And when he learned from the centurion that he was dead, he granted the corpse to Joseph. And Joseph bought a linen shroud, and taking him down, wrapped him in the linen shroud and laid him in a tomb that had been cut out of the rock. And he rolled a stone against the entrance of the tomb. Mary Magdalene and Mary the mother of Joses saw where he was laid.

Mark tells us they crucified Jesus at about 9 o’clock or the third hour of the day. Then, about noon or the sixth hour, darkness covered the land. It was dark for 3 hours, until the ninth hour. This is like the darkness that fell over Egypt. It lasted three days before the death of the firstborn sons (Exodus. 10:22). Amos prophesied this. Amos 8:9, 10 the Lord promised to, “’And on that day,’ declares the Lord GOD, ‘I will make the sun go down at noon and darken the earth in broad daylight.’…’like the mourning for an only son.’”

Why did darkness fall on the earth? The light of the word was removed from the world. This expressed the alarming effects of God’s judgment.

None of the Gospel writers mention any reaction to the darkness by the scribes and priests. They paid no attention to the eclipse of the sun. They closed their eyes to the darkness. This ought to strike terror in our hearts. It tells us how easy it is to ignore the severity of God’s coming judgment. The darkness was to cause them to realize God’s design for Christ’s death. They were unaware of the severity of His judgment. Instead, they continued to mock.

During the ninth hour, Jesus cried out. He offered His body as the price of our reconciliation with God. His soul endured our punishment. He became, as Isaiah said, a man of sorrows.

He cried “Eloi, Eloi, lema sabachthani?” This is the first verse of Psalm 22 in Aramaic. Even in the jaws of death, the scriptures determined Jesus’ life and actions.

Christ suffered more than physical pain. Too often we ignore the suffering of Christ’s soul. In order for Christ to atone for our sin, he needed to go before God’s judgment as a guilty person. Nothing is more dreadful than to have God as Judge. God’s wrath is worse than any death. But Christ accomplished all that God required to redeem us.

When Christ cried out, some of the bystanders said He was calling for Elijah. In saying so, they continued to mock Him. They intended to turn His prayer into slander. Satan’s most effective means of hindering our salvation is to keep us from calling on God. He employs his agents to drive us, as far as he can from the desire to pray.

Someone ran to give Christ a drink of sour wine. This was not the same mixture Christ refused earlier. It was cheap wine. It was the wine of slaves and soldiers. It may have been the wine for the soldiers to drink. This was no humanitarian gesture. There was no desire to relieve suffering. They intended to prolong it. They wanted to revive Jesus to see if “Elijah” would come. They mocked him again saying. “Wait, let us see whether Elijah will come to take him down.”

Jesus cried out one more time and died. Neither Mark nor Matthew tells us what He cried. But Luke gives us Christ’s words. “Father, into your hands I commit my spirit!” Luke 23:46. His cry showed His intensity to do the Father’s will.

This is a realization of Christ’s words. “No one can come to me unless the Father who sent me draws him.” (John 6:44) And again. “This is why I told you that no one can come to me unless it is granted him by the Father.” (John 6:65). The scribes and priests were not true Israelites. “But it is not as though the word of God has failed. For not all who are descended from Israel belong to Israel.” (Romans 9:6)

When Christ died, God ripped open the temple veil. The veil separated men from God’s presence. Now we may go in because of Christ’s atoning sacrifice. Christ removed the debt we owed. (Colossians 2:14.) Christ removed every obstacle to the Father. By relying on Him as our Mediator, we are a royal priesthood, (1 Peter 2:9.)

The high priest no longer needs to enter into the Most Holy Place to atone for the sins of the people. Sacrifices were no longer needed. The ancient priesthood had no farther use. Though the temple building stood, it was no longer necessary to worship God.

After Christ died Joseph of Arimathea asked Pilate for Christ body. Joseph deserves praise for his action. He exposed himself to the hatred of the whole nation. He exposed himself to danger. His action demanded courage. Yet it arose from a secret movement of the Spirit. He had been one of Christ’s disciples. Yet he had never ventured to make an open profession of his faith.

This appears as Joseph’s first act of faith. It comes at a time when all Jesus’ disciples had fled. Joseph puts himself in defiance of the Sanhedrin. He jeopardized his entire future.

Christ quick death surprised Pilate. Jesus hung on the cross for six hours. Crucifixion could last two or three days. Pilate verified Jesus death with the centurion then a granted the body to Joseph.

Christ’s burial acts as a transition from the disgrace of the cross to the glory of the resurrection. God determined Christ should be buried. He was not thrown in a ditch and left to rot as was the custom. God had prepared a means to have Christ’s body buried in an honorable way.

Joseph bought linen and wrapped Christ’s body in it. He then placed Jesus body in a tomb. The tomb appears to be a family tomb cut out of the rock. He rolled a large stone in front of the tomb to seal it. This was all done in haste. It was “the day of Preparation.” The day before the Sabbath was the day of Preparation. Food was prepared before sunset. Sunset was when the Sabbath began. Joseph needed to buy the linen, make arrangements for Jesus’ burial, and ready the tomb in the three hours. That was the time remaining between Jesus’ death and sunset.

The women saw where they laid Jesus so they could return after the Sabbath to anoint the body.

This was a time of depression and lost hope. The one they believed was the messiah died like a common criminal. But wait Sunday is coming! Praise God!