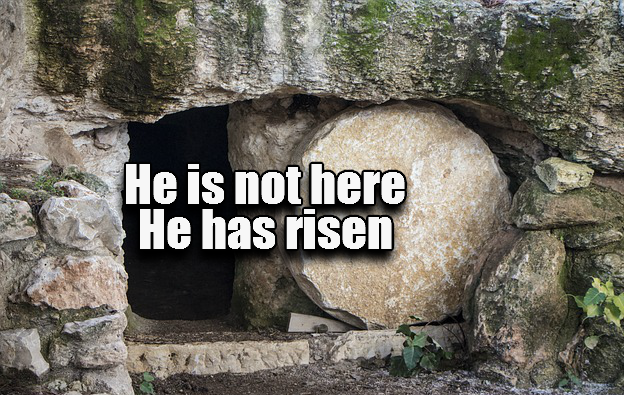 When the Sabbath was past, Mary Magdalene, Mary the mother of James, and Salome bought spices, so that they might go and anoint him. And very early on the first day of the week, when the sun had risen, they went to the tomb. And they were saying to one another, “Who will roll away the stone for us from the entrance of the tomb?” And looking up, they saw that the stone had been rolled back—it was very large. And entering the tomb, they saw a young man sitting on the right side, dressed in a white robe, and they were alarmed. And he said to them, “Do not be alarmed. You seek Jesus of Nazareth, who was crucified. He has risen; he is not here. See the place where they laid him. But go, tell his disciples and Peter that he is going before you to Galilee. There you will see him, just as he told you.” And they went out and fled from the tomb, for trembling and astonishment had seized them, and they said nothing to anyone, for they were afraid.

Some of the earliest manuscripts do not include 16:9–20.

Now when he rose early on the first day of the week, he appeared first to Mary Magdalene, from whom he had cast out seven demons. She went and told those who had been with him, as they mourned and wept. But when they heard that he was alive and had been seen by her, they would not believe it.

After these things, he appeared in another form to two of them, as they were walking into the country. And they went back and told the rest, but they did not believe them.

This is the Gospel. It is not about living a good life. It is not about having your best life now. It is not about being kind or gaining supernatural power. The Gospel is Jesus rose from the dead. He rose so we could stand before a holy God. He atoned for our sins so we did not need to face God’s wrath. He did it all. That is the Gospel. If you are in a church where you do not hear this every single Sunday, find another church. You are not in a Gospel church.

It all comes to a head right here. All Mark’s writing built to this. The resurrection smashed the fear, the weeping, and three days of sorrow. It replaced all that with celebration. The resurrection restored the disciples’ hope. Who can’t get excited about that? He has Risen!

Paul tells us without Christ’s resurrection from the dead there is no hope of salvation. (1 Corinthians 15:14). Christ appeared to His followers a little bit at a time. He appeared to them according to their ability to grasp what had happened. He started with the women. He not only allowed them to see Him. But he commissioned them to tell the apostles. For a short period of time, the women became instructors to the apostles.

After the Sabbath, the women went to the tomb. They went to anoint Jesus body. The Jews did not embalm bodies. Anointing was a way to cover the snitch of a decaying body. Anointing also showed affection.

Jesus had told them He would rise from the dead. Even so, they had no hope that Jesus would rise. Dead men stay dead. That is a law of nature. But the laws of nature did not bind Jesus. Yes, they sinned by their unbelief. Yet God accepted their act of love. He rewarded it by allowing them to be the first to witness the resurrection.

On the way to the tomb, the women realized they had not thought through their plan. There was a large stone blocking the tomb. How will they move it? Who would remove it? They needed someone strong to roll it away. Unbeknownst to them, someone stronger had already rolled it away.

When they arrived at the tomb they saw the stone rolled away. They entered the tomb. They did not see Jesus body. Instead, they saw a man dressed in white.

To understate it, not to see Jesus and see another man surprised them. The man tries to reduce their fear. He says I know you’re looking for Jesus. But He ain’t here. He has risen. See. Look here, they put Him here, but He ain’t here. Now go tell the disciples.

Many critics claim there is a contraction between the Gospel writers. they point out Mark and Matthew mention only one angel while John and Luke mention two. A careful reading of the account reveals there is no contradiction. Because Mark and Matthew mention only one, does not mean there was only one. Because Luke and John mention 2 does not mean there were only two. It is common in Scripture to use a figure of speech where a part represents the whole. So as far as the number of angels, we know there were at least two. And one of them was on the right.

The man told the women to go and tell Jesus disciples he had risen. Mark concludes his writing by saying the women did not tell anyone. They were afraid. This contrasts with the other Gospels. That may be why later scribes added the rest of the chapter. But resolving the paradox is easy.

God must loosen our tongues. He had to loosen the women’s tongues.

The fact that someone added the rest of the chapter later should not alarm us. If Mark did not write it. Scribes added it very early. Early church writers cite these verses as early as the late second century. We find them in the overwhelming majority of existing Greek manuscripts.

They are consistent with the rest of the Gospel writers. And God has seen it proper to include it. It has been accepted as canon by the church for 2000 years.

Our Lord appeared to Mary Magdalene first. It is possible that the other women were with her and Mary Magdalene saw Christ first. And as is consistent with the literary form, all the women went and told the disciples. Mark mentions Mary Magdalene to represent them all.

The disciples did not believe the women. They must have thought they were stupid. They held a fable or dream as true. Their unbelief deprived them of great joy and blessing.

Christ appeared to two more as they were walking in the countryside. They too told the disciples Christ had risen. But they were not believed. The disciples knew one thing for sure, dead men stay dead. It was impossible for Jesus to have risen from the dead.

If you believing dead men come back to life you are crazy. Or God’s grace has changed you. The disciples did not believe this nonsense until God allowed their conviction. If you believe in Christ’s resurrection thank God for His mercy to you.