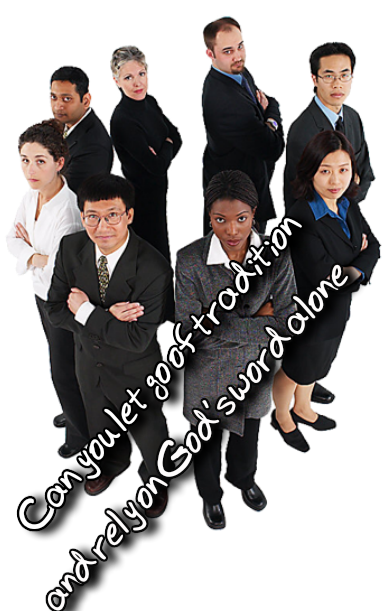 Now when the Pharisees gathered to him, with some of the scribes who had come from Jerusalem, they saw that some of his disciples ate with hands that were defiled, that is, unwashed. (For the Pharisees and all the Jews do not eat unless they wash their hands properly, holding to the tradition of the elders, and when they come from the marketplace, they do not eat unless they wash. And there are many other traditions that they observe, such as the washing of cups and pots and copper vessels and dining couches.) And the Pharisees and the scribes asked him, “Why do your disciples not walk according to the tradition of the elders, but eat with defiled hands?” And he said to them, “Well did Isaiah prophesy of you hypocrites, as it is written,

“‘This people honors me with their lips,
but their heart is far from me;
in vain do they worship me,
teaching as doctrines the commandments of men.’

You leave the commandment of God and hold to the tradition of men.”

And he said to them, “You have a fine way of rejecting the commandment of God in order to establish your tradition! For Moses said, ‘Honor your father and your mother’; and, ‘Whoever reviles father or mother must surely die.’ But you say, ‘If a man tells his father or his mother, “Whatever you would have gained from me is Corban”’ (that is, given to God)— then you no longer permit him to do anything for his father or mother, thus making void the word of God by your tradition that you have handed down. And many such things you do.”

The disciples did not follow the traditional teachings. The Pharisees and legal experts pointed this out. They asked why. This was not a genuine question. They were not asking to learn. They were accusing. They believed this was evidence Jesus was a false teacher.

Mark tells us, the Pharisees never eat until they washed. They washed their hands, pots, kettles, cups and dining couches. This had nothing to do with sanitization. It was a ritual washing.

The Pharisees performed a ritual washing before eating. The exact method is uncertain. But the Greek says “except they wash the hands with a fist.” Some think they rubbed the fist of one hand on the palm of the other. That would allow the outside of the hand to clean the inside. The inside of the hand touched the food.

Does any of that sound familiar? It should. This is the claim Rome and many Protestant churches make.

Rome made this claim at the Council of Trent.

“And seeing clearly that this truth and discipline are contained in the written books, and the unwritten traditions which, received by the Apostles from the mouth of Christ himself, or from the Apostles themselves, the Holy Ghost dictating, have come down even unto us, transmitted as it were from hand to hand.” (Emphasis added) Council of Trent Canons and Decrees Session 4.

“By the divine assistance promised to him in blessed Peter, that infallibility which the divine Redeemer willed his church to enjoy in defining doctrine concerning faith or morals. Therefore, such definitions of the Roman pontiff are of themselves, and not by the consent of the church, irreformable.” (Vatican I Chapter 4 Paragraph 9).

Paul said Peter stood condemned. “But when Cephas came to Antioch, I opposed him to his face, because he stood condemned.” (Galatians 2:11) Jesus called Peter Satan. (Matthew 16:23, Mark 8:33). Peter was not infallible, that included matters of faith and practice. But the Pope is infallible because he is Peter’s successor. Unbelievable!

Exalting the human traditions over God’s word is not limited to Rome. Many mega church pastors create a cult-like following. They claim divine anointing. When opposed, they quote 1 Chronicles 16:22. “Touch not my anointed ones”

The Pharisees, Rome, and many Protestant churches all make the same error. They hold man-made teaching over God’s revealed word. Jesus condemned the Pharisees. Why would anyone believe He does not condemn us for the same thing?

They may be sincere but their worship is idolatrous and thus sinful.

Rome’s tradition is the Pope. Modern protestant tradition is innovative worship. Men continue to develop modes of worship. They claim church needs to provide a service people enjoy. Who is being worshiped, God or man? Personal preference is not a reason to invent a new form of worship. The question is, how does God want us to worship Him?

God has said how He wants us to worship Him. Yet we treat worship as if it were a trivial manner. We will interrupt worshiping God to praise men. “So and so had a baby. Welcome so and so to the service, they were gone so long.”

Congratulating a man and wife on the birth of a child shows kindness. Welcoming someone back from a long trip shows hospitality. God commands to do both. But it must not take precedence over worship.

We should learn three things from this passage. First, innovative forms of worship displease God. We are to hear Him alone to train and instruct us in true godliness. Second, Those working at or on man-made traditions have meaningless jobs. It does not matter how hard they work. Their labor is meaningless. Third, we sin against God when man-made forms of worship overshadow the majesty of God’s law.

The Pharisees could have retorted, “God’s ceremonial law required washing.” And they would be right. But they had invented extra washings. They dictated modes of washing. They went beyond God’s law. Today men may use sound reasoning to invent more “relevant” worship. But it displeases God.

God’s law demanded outward cleanliness. But this was not to consume them. It was to draw attention to the need for inward cleanliness. Paul tells us these man-made inventions may appear wise. (Colossians 2:23). But, Jesus commands us to rest on God’s Law alone

We give money to charity. They care for the poor. We do not need to get our hands dirty and actually care. We don’t risk going to unsafe places. We will pay others to do it. That is the modern way. It is a more efficient way to do things.

What was it Jesus said? You make void the word of God by your tradition.