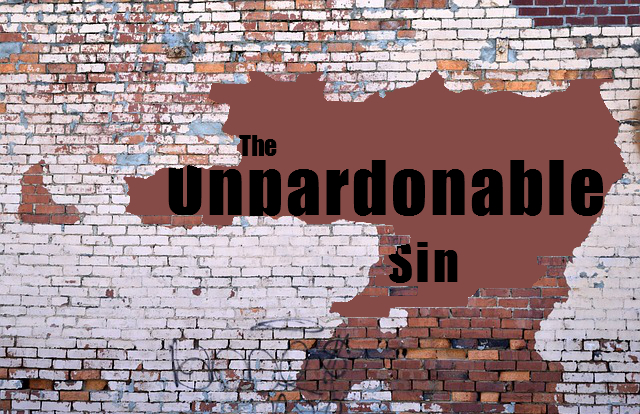 And the scribes who came down from Jerusalem were saying,“He is possessed by Beelzebul,” and “by the prince of demons he casts out the demons.” And he called them to him and said to them in parables,“How can Satan cast out Satan? If a kingdom is divided against itself, that kingdom cannot stand. And if a house is divided against itself, that house will not be able to stand. And if Satan has risen up against himself and is divided, he cannot stand, but is coming to an end. But no one can enter a strong man’s house and plunder his goods, unless he first binds the strong man. Then indeed he may plunder his house.

“Truly, I say to you, all sins will be forgiven the children of man, and whatever blasphemies they utter, but whoever blasphemes against the Holy Spirit never has forgiveness, but is guilty of an eternal sin”—for they were saying, “He has an unclean spirit.”

What is the unpardonable sin? Let’s look at this passage in its context. And we should be able to answer that question.

It appears the scribes came from Jerusalem intending to disrupt Christ’s teaching. Jesus popularity worried them. People were starting to take Jesus seriously. They needed to explain away Jesus’ miracles. They could not say they did not happen. Everyone had seen them. So they had another approach. Jesus used demonic powers.

The Pharisees used Beelzebul as a name for Satan. They accused Jesus of casting out demons by the power of Satan. They said Jesus was either the devil or in league with the devil. They make the same accusation in the Talmud.

The fact some claimed Jesus was working for the devil is well documented in their own writings.

Things were happening they could not explain. Jesus did not fit their idea of a Messiah. So, they “knew” Jesus was not from God. There in lies the first lesson. We should always be teachable. God is beyond our ability to comprehend. So it should not surprise us when God does something we do not expect or understand. Nor should it surprise us when He works in ways we do not expect. We need to be teachable.

Since they “knew” Jesus was not from God. What would explain His powers? Where did they come from? If they did not come from God, they had to come from Satan.

Jesus called them over and said, “Hey guys, I want you to stop and think about what you are saying. Use a little commons sense. If what you claimed is true what are the ramifications? Come on think about it!”

Jesus then goes on and explains what the ramifications are. “If Satan is casting out Satan, then there would be an internal struggle within Satan’s camp. Satan would be fighting a civil war. If demons are fighting among themselves, they are weakening themselves.”

“You are witnessing me bind Satan to reclaim what is God’s. What y’all are claiming could not be true. It defies all reason.”

What was happening is the scribes were working for the devil. Once someone has concluded Jesus is not God, they look for reasons to ignore God’s working.

Jesus then gave us some very good news. “Truly, I say to you, all sins will be forgiven the children of man, and whatever blasphemies they utter.” This is very good news. The range of forgiveness is long and wide.

The context helps us. Jesus mentions this in the context of the scribes claiming Jesus was a demon. Mark also explains. He said. “for they were saying, “He has an unclean spirit.”

The unforgivable sin Jesus mentions is the act of equating Jesus’ work and power to Satan. And doing this with intention. This equates supreme good with supreme evil. It hardens one’s heart in a way that makes repentance and forgiveness impossible.

To quote John Wesley explaining the unpardonable sins. “Can any words declare more plainly, that it is “the ascribing those miracles to the power of the devil which Christ wrought by the power of the Holy Ghost?”