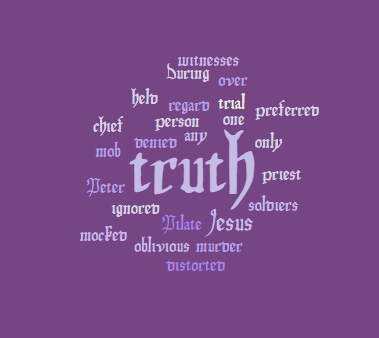 And as soon as it was morning, the chief priests held a consultation with the elders and scribes and the whole council. And they bound Jesus and led him away and delivered him over to Pilate. And Pilate asked him, “Are you the King of the Jews?” And he answered him, “You have said so.” And the chief priests accused him of many things. And Pilate again asked him, “Have you no answer to make? See how many charges they bring against you.” But Jesus made no further answer, so that Pilate was amazed.

Now at the feast he used to release for them one prisoner for whom they asked. And among the rebels in prison, who had committed murder in the insurrection, there was a man called Barabbas. And the crowd came up and began to ask Pilate to do as he usually did for them. And he answered them, saying, “Do you want me to release for you the King of the Jews?” For he perceived that it was out of envy that the chief priests had delivered him up. But the chief priests stirred up the crowd to have him release for them Barabbas instead. And Pilate again said to them, “Then what shall I do with the man you call the King of the Jews?” And they cried out again, “Crucify him.” And Pilate said to them, “Why? What evil has he done?” But they shouted all the more, “Crucify him.” So Pilate, wishing to satisfy the crowd, released for them Barabbas, and having scourged Jesus, he delivered him to be crucified.

And the soldiers led him away inside the palace (that is, the governor’s headquarters), and they called together the whole battalion. And they clothed him in a purple cloak, and twisting together a crown of thorns, they put it on him. And they began to salute him, “Hail, King of the Jews!” And they were striking his head with a reed and spitting on him and kneeling down in homage to him. And when they had mocked him, they stripped him of the purple cloak and put his own clothes on him. And they led him out to crucify him.

According to Jewish law, they could not hold a trial during the night. But the Sanhedrin had tried Jesus during the night. Morning broke and now they needed the pretense of a trial. So, as soon as morning came, they held a quick consultation to confirm the previous hearing. Once they completed the legal formalities, they handed Jesus over to Pilate. As the magistrate, only Pilate had the legal right to pronounce capital sentences.

Jesus, the King of Kings, allowed His disgrace. The Sanhedrin chained Him and dragged Him before a profane ruler for judgment. The son of God stood there like a common criminal. He stood before a mortal man. He permitted the Jewish leader to accused and condemn Him so we may stand before a holy God.

The priests accused Jesus of being the King of the Jews. Nothing would have been more objectionable to Pilate than this. His task was to maintain order and Roman rule. So this was the main charge they leveled against Jesus. But Pilate saw through their flimsy arguments. Yet he lacked the backbone to let an innocent man go free.

It was customary for Pilate to release a prisoner during the feast. No doubt Pilate thought this was his out. He offered the crowd the choice between a murderer and Christ. They chose the murderer.

Barabbas was an insurrectionist. He sought the military overthrow of Rome. Some manuscripts of Matthew give Barabbas’ first name as “Jesus.” (Matt. 27:16) This was a common 1st-century name. The choice is ironic. Jesus Barabbas was a political wanna-be savior of Israel. Jesus of Nazareth was the true Savior of the world.

Barnabas’ crime was horrific. This should have been enough to prevent the crowd from selecting him. But God had appointed Christ to atone for the sins of the world. So He allowed the mob to place Christ lower than a murderer.

The priests wiped up the crowd. They manipulated them to ask for a murderer over the savior. This shows the wickedness of the priest. Yes, clergy can and often are wicked. They have and still oppose Christ Himself. Because someone is a cleric does not mean they present God’s word. Here was an example. The Roman Pope is another. But do not think Protestant clergy are exempt. The list of profane protestant clerics is very long.

Often the men the world hold in high esteem misrepresent and blaspheme God.

Pilate set aside his authority and responsibility. He submitted to mob rule. A coward sacrifices justice to popular clamor. Pilate tried to appease the mob by surrendering truth.

He turned Jesus over to the soldiers for crucifixion as the mob demanded. Crucifixion was the cruelest form of punishment practiced by the Romans. Except in rare situations, Roman citizens could not undergo crucifixion. The Romans used it only for the worst crimes. The Roman historian Cicero called it “a cruel and disgusting penalty.”

Before crucifixion the soldiers scourged Jesus. A Roman flogging was excruciating. They would strip the victim and bind him to a post. They fastened his hands above him. Sometimes they threw him to the ground. Guards standing on either side of the victim would beat him with a whip. They made the whip out of leather with pieces of lead and bone inserted into its ends. The Jews only allowed 39 lashes. The Romans had no limit. Many people died from the beating. They never made it to the crucifixion.