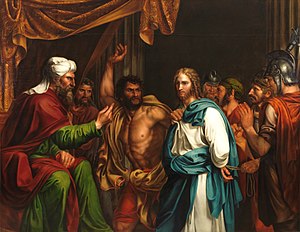 They took Jesus to the high priest, and all the chief priests, the elders and the teachers of the law came together. Peter followed him at a distance, right into the courtyard of the high priest. There he sat with the guards and warmed himself at the fire.

The chief priests and the whole Sanhedrin were looking for evidence against Jesus so that they could put him to death, but they did not find any. Many testified falsely against him, but their statements did not agree.

Then some stood up and gave this false testimony against him: “We heard him say, ‘I will destroy this temple made with human hands and in three days will build another, not made with hands.’” Yet even then their testimony did not agree.

Then the high priest stood up before them and asked Jesus, “Are you not going to answer? What is this testimony that these men are bringing against you?” But Jesus remained silent and gave no answer.

Again the high priest asked him, “Are you the Messiah, the Son of the Blessed One?”

“I am,” said Jesus. “And you will see the Son of Man sitting at the right hand of the Mighty One and coming on the clouds of heaven.”

The high priest tore his clothes. “Why do we need any more witnesses?” he asked. “You have heard the blasphemy. What do you think?”

They all condemned him as worthy of death. Then some began to spit at him; they blindfolded him, struck him with their fists, and said, “Prophesy!” And the guards took him and beat him.

This begins the story of Jesus’ trials. These trials were full of errors and irregularities. The Jews were not concerned about justice. Their concern was expediency and politics. The Jewish trial had three parts. Annas had a hearing. This is only recorded in John 18:12–14, 19–23. Caiaphas led the Sanhedrin hearing in his house. (14:53–65). Then an early morning session of the Sanhedrin (15:1).

That was the case here. The Sanhedrin “knew” the correct answer. Jesus was an insurrectionist and blasphemer. That was common knowledge. But there was no evidence. So, they manufactured testimony.

The usual location for the Sanhedrin to meet was in the marketplace near the temple. This trial took place in the high priest’s house. The trial was irregular in time (at night) and place.

Not only was the trail a sham, It was a shallow sham. The purpose of this passage is to show the conspiracy against Christ. Christ was innocent of any charges. He was so innocent they could not condemn Him even by false witnesses.

The high priest’s role was to mediate between God and men. Those who sat as his counsel represented the whole Church. And they were all conspired to extinguish the only hope of salvation.

They had already decided the verdict and sentence. Nothing was further from their intent then justice or truth. But they could not collect the testimony they needed. They brought in bogus witnesses. The witnesses perjured themselves. And even then, they could not agree with each other. They made it impossible for the Sanhedrin to even have a pretense of truthfulness.

Those who lied did not make up the lies out of whole cloth. They took what Jesus had said and twisted it. They turned it into a crime. The testimony about destroying the temple show this.

The Synoptic Gospels do not record Jesus saying this. It is only found in John’s account. John mentions it in relation to cleansing the temple. (John 2:19). This supports the idea Christ cleansed the temple twice. The lapse of three years would explain the false witnesses’ garbled version.

The kangaroo court was going nowhere fast. So, the high priest asked Jesus to respond. Since the witnesses were inept. He hoped Jesus would incriminate Himself. But Jesus stood there in silence.

There was no evidence against Jesus. So the High Priest asked Jesus straight out “Are you the Messiah”. What is interesting about this question it presumes a positive answer was blasphemy. Yet every Jew was looking forward to the coming of the Messiah. If the Messiah was coming someone had to be him. Someone had to claim the title, Messiah. That would not be blasphemy. They both expected the Messiah and presumed Messiahship was blaspheming. You cannot have it both ways.

But reason and truth had no place in this trial. They had already concluded, Jesus must die. They already knew the “correct” verdict. The irrationality of their claim did not bother them.

The high priest asked, “Are you the Messiah, the Son of the Blessed One?” From this, we can tell they bestowed the title “Son of Man” on the Messiah.

Jesus had already claimed, in public, He was the Messiah. He reaffirmed it to this kangaroo court.

Jesus’ response was more than a simple yes. He mentioned His coming second coming. This first time provided a way of salvation and the second time he comes in judgment. Jesus response is an allusion to Psalm 110:1. “The LORD says to my Lord: Sit at my right hand, until I make your enemies your footstool.” Jesus claimed He shared authority with God. The Sanhedrin thought they were His judges. The reality was the reverse.

Jesus’ claim enraged the high priest. He lost all sense of piety. They were looking for the Redeemer. And yet they reject Him.

The chief priest proclaims Jesus a blasphemer. And the entire Sanhedrin concurs. They spat in Jesus’ face. They blindfolded Him. They beat Him with their fists. They mocked Him.

The temple soldiers took Him out and beat Him. This shows the cruelty of men. It reveals a mob mentality.

This was the start of Christ’s humiliation and suffering. He suffered these things for us. He suffered and died so we may live. His suffering is our gain. Praise be to You, O Christ.