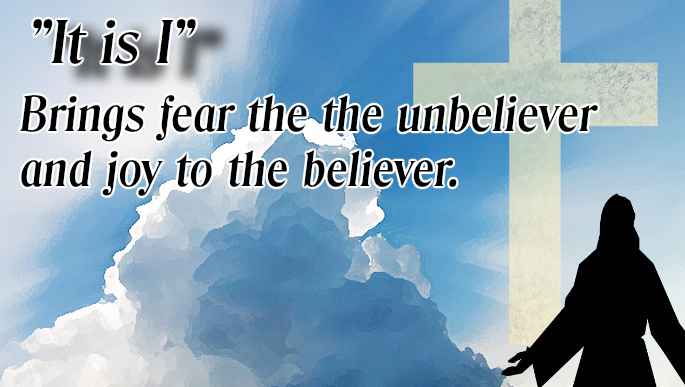 When evening came, his disciples went down to the sea, got into a boat, and started across the sea to Capernaum. It was now dark, and Jesus had not yet come to them. The sea became rough because a strong wind was blowing. When they had rowed about three or four miles, they saw Jesus walking on the sea and coming near the boat, and they were frightened. But he said to them, “It is I; do not be afraid.” Then they were glad to take him into the boat, and immediately the boat was at the land to which they were going.

Jesus has just withdrawn into the mountain to prevent the crowd from making him king. If the mob had done what they intended, it would have put a stain on Christ that would be difficult to remove. While John does not mention it, the other Gospels say Jesus spent this time in prayer. It is probable Jesus was praying the Father repress the people’s intent.

Jesus crossing the lake was another miracle or sign. This miracle was for Jesus’ disciples. It was to confirm their faith.

John passes over many of the details the other Gospels include. For example, the disciples struggled for several hours against the storm. It is probable the storm drove them off course right after dark. The other gospels also tell Jesus did not appear until the 4th watch, which is about 3 am. So they were battling for their lives. And they battled for a long time. (Matthew 14:25 and Mark 6:48)

We do not know with certainty where the disciples were on the lake. We do not even know the point where they set sail. But there are a few hints. John mentions Tiberias. Luke says  Jesus fed the five thousand near Bethsaida. We can make an educated guess this is where Jesus taught and fed the five thousand North of Tiberia near Bethsaida. Since they ended up in Capernaum, we can guess that was their destination.

Matthew says the boat was a long way from land. (Matthew 14:24) John says they rowed about 3 or 4 miles. The distance from Tiberias to Capernaum by sea is about 3¼ miles. If there were north of Tiberias, the distance was even less. It is clear the storm blew them far off course. This caused them to row far and still be a distance from land.

When Christ presented himself to the disciples they were in danger. John writes when the disciples see Jesus they were afraid. This seems to be a little understated to me. It would be impossible not to be afraid. If we see what appears to be an apparition, we conclude it is an imposture of Satan or a bad omen from God. We do not think it is a good thing. But once Christ speaks and we recognize Christ, then joy and peace enter out hearts and minds.

When Jesus said “It is I” those words brought peace and comfort to His disciples. It is by Christ presence alone that we have a reason for confidence. But this is true only for His disciples. The world does not have this peace. Those same words bring fear to the world. He strikes down wicked men. The reason for the difference is Jesus is a Judge for the unbelievers. His judgment is ruin for those who do not believe.

But to the believer, those words “It is I” bring hope and peace. Jesus satisfies God’s justice for the believer. As a result, the believer can rest as soon as they hear His name. The disciple’s journey was over. They arrived at their destination as soon as Jesus entered the boat.