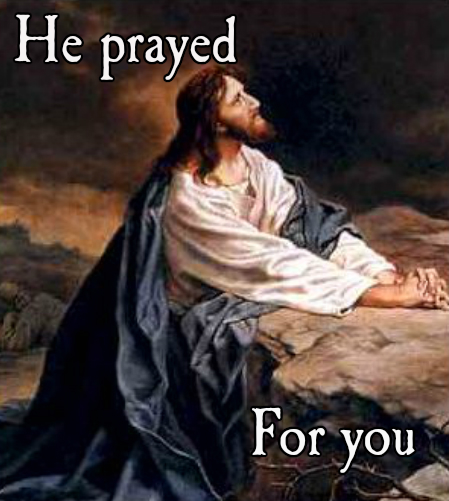 When Jesus had spoken these words, he lifted up his eyes to heaven, and said, “Father, the hour has come; glorify your Son that the Son may glorify you, since you have given him authority over all flesh, to give eternal life to all whom you have given him. And this is eternal life, that they know you, the only true God, and Jesus Christ whom you have sent. I glorified you on earth, having accomplished the work that you gave me to do. And now, Father, glorify me in your own presence with the glory that I had with you before the world existed.

This whole prayer is directed to one thing, that the disciples not lose courage.

There are those who think since Christ looked up to the heavens, that prescribes how we are to pray. This is a descriptive, not a prescriptive text. That is, it describes what Christ did. It is not a command for us to follow. The desire to imitate Christ is admirable. But we are to imitate Christ with more than empty external gestures. People look up and raise their hands at a rock concert. That is not worship. Well, maybe it is. But it is not worshiping the one true God. What is inside us expresses our worship. We are not to work ourselves into an emotional frenzy with external means or devices.

Christ asks the Father give Him nothing but what is the Father’s will. That is a constant rule for prayer. We are to ask no more and no less than God’s will.

When Christ said, He accomplished the work the Father gave Him, how could that be true? The cross still lied ahead. Christ had not yet done everything. Wasn’t the cross the whole reason He came?

The Father had sent Christ. Now, Christ’s desired the Father reunite Them. Christ wanted to return to the glory He had before the world began. Christ had stripped Himself of His glory for our benefit. Now it was time to return to His glory.

In verse 6 Jesus begins to pray for His disciples. He pleads for their salvation. He points out the disciples were elect before the foundations of the world. “Yours they were, and you gave them to me,”

Jesus states the disciples were the Father’s before they were His. By this Christ confirms election by free grace. The disciples had always belonged to God. God distinguishes them from the reprobate only by pure grace. It was not because of their faith or any other sort of merit. This was an election by grace alone.

Christ gave the Father’s words to the disciples and they received those words. But remember what John said at the beginning of his Gospel. “And the Word became flesh and dwelt among us, and we have seen His glory, glory as of the only Son from the Father, full of grace and truth” (John 1:14). Christ is the word of God.

The prayers which we offer are limited to God’s elect. Yes, we are to pray for the salvation of everyone. Because we do not know who God has predestined to election. That includes the entire human race. But that is because we do not know who the elect are. We are also to pray for the destruction of God’s enemies. But do not forget we all were once, by nature, enemies of God. (Romans 5:10, James 4:4)

“I have guarded them, and not one of them has been lost except the son of destruction, that the Scripture might be fulfilled.” With these words Christ is repeating the theme He stated in chapter 6. All the Father gives Him come to Him. (John 6:37) And none of the non-elect will, or even, can come to Him. (John 6:44)

Christ requests the Father defend them as they are Christ’s inheritance.

Christ points out the means of our sanctification. God’s word sanctifies us. There are those who claim sanctification but neglect the God’s word. This cannot be. God consecrates us to Christ by His truth. It is God’s word that is truth. (Romans 1:16)

“Thy word is truth,” describes the doctrine of the Gospel. The Spirit cleanses the Church by the washing of the water and by God’s word (Ephesians 5:26)

There is great comfort in this prayer. Christ did not pray for the disciples alone He prayed for all believers. This prayer is also for those who believe in Christ because of the disciples’ teaching. Christ prayed for our protection as well as the disciples.

Christ prayed for the unity of the church. This is often miss understood. We are not to seek unity. We are united. We are united in Christ. To often unity is sought outside of Christ. We understand unity with men to be the same as unity with Christ. It is NOT! If we are in Christ, we are united. Our unity is in the Spirit in the bond of peace. (Ephesians 4:3) Christ unites us to each other by Himself.

Christ said that the glory the Father gave Him, He gives to us. He transforms us into His image and His glory. (2 Corinthians 3:18)

He is in us. The Father is in Him. This is the unity Christ prayed to the Father for us.

How does what Christ said in this prayer is square with the idea that God loves the world? John 3:16 indicates the Father’s loved men separate from the redemptive work of Christ. In John 3:16 and similar passages love denotes mercy. It is God’s mercy that causes God to withhold his justice even from His enemies.

Christ also prays for us to be with Him in Heaven. “Father, I desire that they also, whom you have given me, may be with me where I am.” (v24) He asked the Father not only that we are with Him, but that we may see His glory. Many long to see the majesty of the grand canyon or other natural wonders. The glory of Christ is infinitely greater than anything in this world. So what Christ asked the Father to give us is joy beyond measure.

Christ said the world does not know the Father. But He knows the Father and He knows us. Scripture uses “to know” in a very particular way. It is not an intellectual knowledge. It is not an awareness. Paul tells us God has shown Himself even to unbelievers (Romans 1:19). Even atheists know there is a God. “To know,” as used in scripture, is to have an intimate knowledge. Christ has an intimate knowledge of both the Father and us.