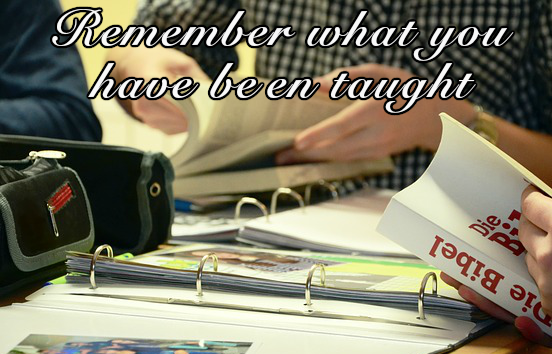 You, however, have followed my teaching, my conduct, my aim in life, my faith, my patience, my love, my steadfastness, my persecutions and sufferings that happened to me at Antioch, at Iconium, and at Lystra—which persecutions I endured; yet from them all the Lord rescued me. Indeed, all who desire to live a godly life in Christ Jesus will be persecuted, while evil people and impostors will go on from bad to worse, deceiving and being deceived. But as for you, continue in what you have learned and have firmly believed, knowing from whom you learned it and how from childhood you have been acquainted with the sacred writings, which are able to make you wise for salvation through faith in Christ Jesus. All Scripture is breathed out by God and profitable for teaching, for reproof, for correction, and for training in righteousness, that the man of God may be complete, equipped for every good work.

This passage starts with a contrast, “You, however…?” The “however” points back to what Paul had just said. Paul has just mentioned to those who claim to be Christians but are hypocrites. Paul is telling Timothy he is not like those men. Timothy had followed what Paul had taught him. Paul has addressed the problem of false teachers. So, Paul now encourages Timothy. He encourages Timothy first by the example Paul had set. Then Paul mentions the ultimate authority, Scripture.

Paul mentions his own persecutions. But in doing so he also said nothing happened to him that all believers should not expect. We are not to view those who suffer at the hand of evil men with suspicion. How often have you heard someone say something like this? “He must have done something wrong. Otherwise, the police would not have arrested him.” We are not to view men with suspicion just because unbelievers have accused them. Righteous men will suffer at the hands of evil men. Paul says to expect it. He is preparing all Christians for persecution.

Paul said, “Indeed, all who desire to live a godly life in Christ Jesus will be persecuted while evil people and impostors will go on from bad to worse, deceiving and being deceived.” So, why are we surprised when those in the world persecute the Church? Why are we so amazed when a Christian loses their business because they will not bake a cake for a gay wedding? Why are we surprised when someone calls us names when we point of the sinfulness of abortion? Paul tells us to expect persecution. We should rejoice that God has counted us worthy to suffer with Christ. (Matthew 5:11-12, Act 5:41, James 1:2-3, Philippians 3:8)

A question may come to mind, do all Christians have to be martyrs? Many Christians have never suffered imprisonment. Nor have they needed to flee for their life. The answer is that Satan persecutes Christ’s servants in more than one way. But it is unavoidable that the world will try our faith in some way.

One of the hardest things to endure is watching false teachers and deceivers prosper. They prosper while the children of God suffer. (Psalm 73) Paul echoes the sentiment from the end of Psalm 73 for Timothy to follow. We are to press on and stand firm. The riches of God glory are unfathomable. “But for me it is good to be near God; I have made the Lord God my refuge, that I may tell of all your works.” (Psalms 73:28)

Paul references what Timothy’s mother and grandmother taught him as a child. They taught him the Scriptures. The Old Testament points to Christ. Those were the Scriptures Timothy had. So Paul reminds Timothy to look to the Scripture to make him wise for salvation. So often we ignore the Old Testament when we have questions about salvation. We are to combine faith with prudence. We learn we are to distinguish between the word of men and the word of God. Faith’s foundation is to know the author of our faith is God.

Timothy’s mother and grandmother taught Timothy the law of God. Paul reminds Timothy of that fact. He reminds Timothy of the manner he was taught to understand the Old Testament. False teachers had been misinterpreting the Old Testament. Timothy had learned how to understand and apply the Law from his mother and grandmother. It is a remarkable kindness of God when He provides someone to teach us the scriptures in our early days.

All scripture is authoritative. To be authoritative Paul says God, Himself, has inspired it. So, we should receive it, all of it, with reverence. Paul said all scripture is “breathed out” by God. He is making an important statement about the doctrine of divine inspiration. According to Paul, God is the source and ultimate Author. While men wrote the scriptures God authored it. Scripture has the full weight of God’s authority.