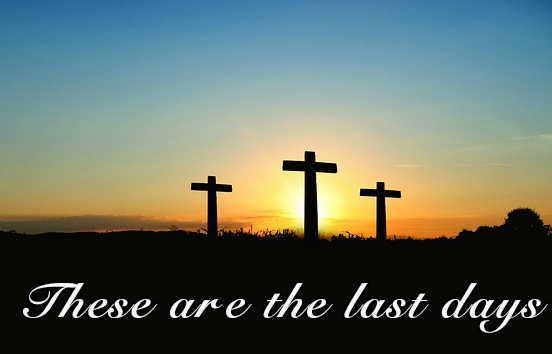 But understand this, that in the last days there will come times of difficulty. For people will be lovers of self, lovers of money, proud, arrogant, abusive, disobedient to their parents, ungrateful, unholy, heartless, unappeasable, slanderous, without self-control, brutal, not loving good, treacherous, reckless, swollen with conceit, lovers of pleasure rather than lovers of God, having the appearance of godliness, but denying its power. Avoid such people. For among them are those who creep into households and capture weak women, burdened with sins and led astray by various passions, always learning and never able to arrive at a knowledge of the truth. Just as Jannes and Jambres opposed Moses, so these men also oppose the truth, men corrupted in mind and disqualified regarding the faith. But they will not get very far, for their folly will be plain to all, as was that of those two men.

This passage begins with, “In the last days…” There is a tendency in the church to think of “the last days” as a short period of historical time. It is off in the future. It is thought of as lasting a year, few years or maybe a decade. But the “last days” is the time from the establishment of the church until the return of Christ. Jesus told his disciples to proclaim the Kingdom of Heaven is at hand. (Matthew 10:7) In other words, Jesus said to tell everyone the Kingdom of Heaven is here.

Since the Kingdom of heaven here, we are not waiting for it. It is both here and coming. You might think of it as a long train pulling into a station. It is here. But the train has not come to a complete stop because the entire train is not in the station. So, it is here but it is not completely here.

In the last days, i.e. “these days” sinful men will rebel against Christ and His Kingdom. The culture continues to degrade. Each generation has thought the next generation was worse than their generation. That is because each succeeding generation continues the slide into greater and greater decadence. That is why Paul tells Timothy the church will be subject to increased suffering. Paul’s day was no different than our day. Many believe the Kingdom of God is absolute peace and freedom from trouble. Paul informs us that just ain’t so.

Paul uses a long list to describe the decadence of men in the last days. There is no need to describe each word Paul uses. The more interesting point is who Paul says these people are. They come from inside the church. They appear pious. They have the scent of godliness. But they are not godly. They deny the power of God. Paul’s advice is pretty simple. We are to avoid such people.

Paul says these people have crept into households or families. Instead of sound doctrine they use a variety of word games and flattery. They are full of knowledge. They may know their bibles forwards and backwards. Yet they have no understanding. They have no systematic understanding of what the bible says. They are like a ship full of cargo that has no rudder.

Paul mentions two people who opposed Moses, Jannes and Jambres. It is generally believed these were two of the magicians in Pharaoh’s court. How Paul knew their name is not known. It may be from stories handed down and not lost to history.

This passage ends with Paul encouraging Timothy. Even though the attacks will come from within the church, Timothy was to not become discouraged. As with all hypocrites, everyone is capable of recognizing their actions. While the attacks will increase and worsen Christ’s church will continue.