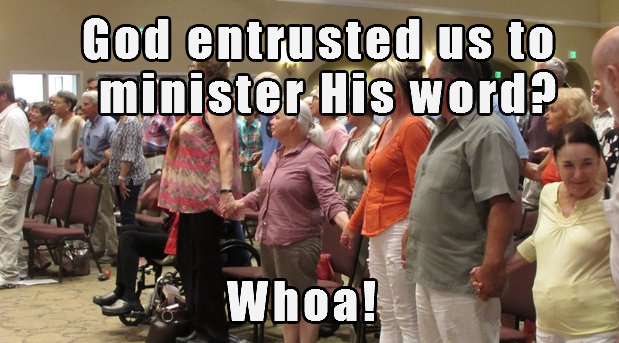 I hope to come to you soon, but I am writing these things to you so that, if I delay, you may know how one ought to behave in the household of God, which is the church of the living God, a pillar, and buttress of the truth. Great indeed, we confess, is the mystery of godliness:

He was manifested in the flesh,
vindicated by the Spirit,
seen by angels,
proclaimed among the nations,
believed on in the world,
taken up in glory.

Paul now states his reason for writing Timothy. Paul has provided Timothy with instructions on prayer, worship, and church offices. Now he expresses his concern for Timothy and the church at Ephesus.

Paul tells Timothy one of the reasons he is writing this is so Timothy will know how to conduct himself. He tells Timothy of importance the office Timothy holds as pastor. Those qualifications for elders and deacons apply to Timothy as well.

Paul now offers poetic thoughts on the work of Christ. This may be part of an early Christian hymn. Nothing is more exciting than the truth this hymn states. God became visible in the person of Jesus. He took our nature upon himself. His majesty, even in the frailty of human flesh, showed through. The angels themselves saw it and could not contain their joy and excitement. They burst into song at His birth. Jesus came, not just for the Jews, but for us, Gentiles as well. And today the world praises His name. He is now in unimaginable glory.

Even in the weakness of the flesh, the power of the Godhead showed itself. Even though he was a weak man, the entire world knows He was and is God.

Christ has left the Church as the keeper and preserver of this truth. The Church, with all its imperfections and frailties, preserve this great truth. Christ appointed the Church, made up of mere men, to the ministry of the word. It is the church which teaches us the greatest things of all. Imagine that, God has left the church, made up of people like you and me, such a great responsibility.