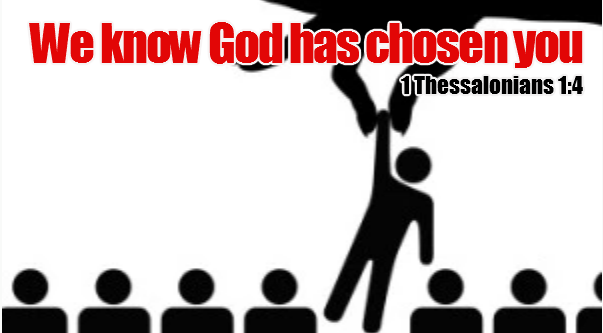 To the church of the Thessalonians in God the Father and the Lord Jesus Christ:

Grace to you and peace.

We give thanks to God always for all of you, constantly mentioning you in our prayers, remembering before our God and Father your work of faith and labor of love and steadfastness of hope in our Lord Jesus Christ. For we know, brothers loved by God, that he has chosen you, because our gospel came to you not only in word, but also in power and in the Holy Spirit and with full conviction. You know what kind of men we proved to be among you for your sake. And you became imitators of us and of the Lord, for you received the word in much affliction, with the joy of the Holy Spirit, so that you became an example to all the believers in Macedonia and in Achaia. For not only has the word of the Lord sounded forth from you in Macedonia and Achaia, but your faith in God has gone forth everywhere, so that we need not say anything. For they themselves report concerning us the kind of reception we had among you, and how you turned to God from idols to serve the living and true God, and to wait for his Son from heaven, whom he raised from the dead, Jesus who delivers us from the wrath to come.
Observation

Paul opens the letter by stating this letter is not just from him, it is also from Silvanus and Timothy. Silvanus is the Latin name for Silas. The Jerusalem council assigned Silas to go with Paul and Barnabus to Antioch. Silas was to deliver the council’s decision on circumcision. (Acts 15:22) Also, Paul chose Silas to go with him on his second missionary journey.

Timothy was the son of a Greek father and a devout Jewish mother. When Paul wrote this letter, Timothy was still a newcomer to the Christ. Paul and Silas enlisted Timothy roughly a year earlier in Lystra. (Acts 16:1)

The Thessalonians had accepted the gospel and authority of Paul. Paul spends no time at all establishing his authority. He simply says, “From Paul to the church at Thessalonica.” There are no titles or anything else.

Paul refers to the Church in Thessalonica as “in God the Father and the Lord Jesus Christ.” From this Paul implies in Thessalonica there was a true Church of God. This further implies there are untrue and unlawful Churches. A gathering of people calling themselves a church do not make a true church.

Mentioning Jesus’ name does not make a true church. The presence of God the Father and the Lord Jesus Christ and the ministry of the Holy Spirit makes a true church.

Paul said he remembered before God the Thessalonians, “work of faith and labor of love and steadfastness of hope in our Lord Jesus Christ.”

Faith itself is a gift of the Holy Spirit. Faith, true faith, then produces outward fruit or effect. The faith of the Thessalonians was a chief concern for Paul. He refers to it throughout the letter.

By the labor of love, Paul means the Thessalonians cultivated love. We know through experience, how laborious love is. The Thessalonians expressed that love by welcoming travelers. Paul will commend their love again in chapter 4. There he says “Now concerning brotherly love you have no need for anyone to write to you, for you yourselves have been taught by God to love one another, (1 Thess 4:9)

Paul goes on and says he knows the young Gentile community is elect because of the evidence. Paul sees their response to the gospel. Their response to Paul’s preaching revealed the grace of God. The Holy Spirit came on them. This was not the Thessalonians  doing it was the Holy Spirit coming to them. God elected them. As a result, they then yielded to the message of the gospel, “not only in word but also in power.” If Paul taught God chose everyone, Paul would not need to say why he knew God had chosen the Thessalonians. There would not be any evidence Paul could point to.

What was Paul referring to when he says “in power”? Some understand it to mean miracles. I would agree. But I do not believe the common understanding of the word miracle is what Paul is referring. A miracle is something done outside the normal laws of nature. By nature, we are sinful and haters of God. God intervened and did something contrary to nature. He turned the hearts to the Thessalonians toward Him.  That is against the law of nature. That is a miracle. “By power,” Paul is referring to the spiritual energy of doctrine.  Paul contrasts that with mere speech.

The Thessalonians were imitators of Paul and the Lord. We all need the church to grow in grace. We learn and grow in our sanctification by imitating those are more mature than we.

The Thessalonians were not Jews. They did not have a background in the law or have an expectation of a coming Messiah. There were pagans worshiping idols. God’s grace not only turned them from idols. They were such strong believers Paul did not need to tell anyone about the work done in Thessalonica. Christians throughout Macedonia and Asia Minor had already heard of the Thessalonians’ faith.

Some people believe God elects everyone. And election does not ensure salvation. That claim requires that we have to accept Christ, or invite Christ into our hearts. That is stating Christ’s work was not enough. We have to add our choice to it. Faith as Armenians believe (I use to be one) is something we generate on our own. We create faith ex nihilo (out of nothing). Armenians understand the election of God as coming from faith and not by God’s grace. They understand that God’s grace does not generate or illuminate our faith. Our faith is a prerequisite.

The reformed doctrine understands that ex nihilo nihil fit, out of nothing, nothing comes. That is, every effect must have a cause. So, something has to cause our faith. God causes our faith (Eph 2:8) Our faith is not our own doing.

This doctrine gives us great comfort in that God, Himself, ensures our salvation. Who could ask for more?

Denying John 6:37 i.e. God’s elect will come to Him, causes the other problems.  So many Churches today believe that they must attract people.  They try to make their services theatrical events, to be attractive. Christ gave the church a specific job. The church is to preach the gospel, administer the sacraments and provide church discipline.