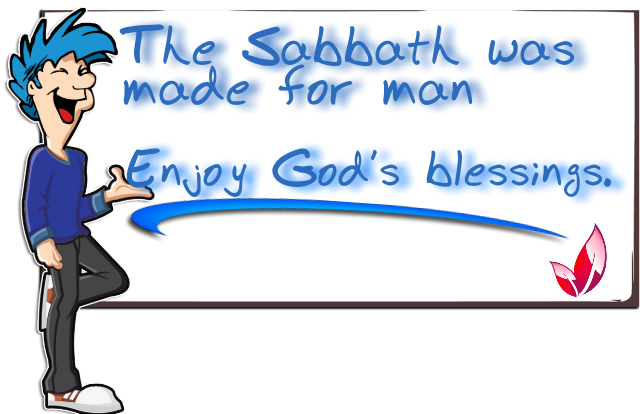 One Sabbath he was going through the grain fields, and as they made their way, his disciples began to pluck heads of grain. And the Pharisees were saying to him, “Look, why are they doing what is not lawful on the Sabbath?” And he said to them, “Have you never read what David did, when he was in need and was hungry, he and those who were with him: how he entered the house of God, in the time of Abiathar the high priest, and ate the bread of the Presence, which it is not lawful for any but the priests to eat, and also gave it to those who were with him?” And he said to them, “The Sabbath was made for man, not man for the Sabbath. So the Son of Man is lord even of the Sabbath.”

Mark here shows how superstitious the Pharisees’ religion had become. They tried to achieve holiness by doing certain things and avoiding others. If they could change their behavior they would be righteous. In their view, righteousness was from the outside in.

Before we come down too hard on them, let us see we do the same thing. We hold the same superstitions. We try to behave in certain “magic” ways. Acting right will make us right. Righteousness is something we do.

Does not God’s Law prohibit working on the Sabbath? No. We are to keep the Sabbath holy. Doing good and doing what God’s Law requires is part of keeping it holy. (Exodus 20:8) It is not a normal day of work. So obtaining nourishment on the Sabbath does not violate God’s Law.

The Pharisees did not accuse Christ disciples of theft. The corners of the field were left for the poor and travelers. The disciples were not stealing.

Nor were the disciple doing farm work. But, that was how the Pharisees saw it. The Pharisees set up their own set of rules to “clarify” God’s law. Anytime we needed to go beyond God’s Law to be safe. We can rest assured, we are violating God’s Law.

The Pharisees said even plucking the “heads of grain” was reaping. And the Law prohibited reaping on the Sabbath. They made worshiping God an adherence to a set of rules.

Jesus’ response was sharp. “Have you never read…” In other words, “You hypocrites you pick and choose the scriptures. You ignore the part of scripture that does not support your perverted views.” Jesus does not defend His disciples by saying, “Yeah, but they are hungry.” He does not lay Scriptures aside. He shows a deep and proper understanding of Scripture.

David was the Lord’s anointed. David and his men ate the bread set aside for the priests. Christ, the son of David, allowed His disciples to fulfill their physical needs. They needed nourishment to continue their mission. This is always lawful even on the Sabbath.

Some claim here is an example to the scriptures containing errors. According to 1 Samuel 21:1-6 Abiathar’s father Ahimelech gave the bread to David. Abiathar was alive at that time and may have been present. So in a strict sense “in the time of Abiathar” is correct. Jesus may have referred to Abiathar because he was a well known David supporter.

Man was made for God, and for His honor and service, We are to understand the Sabbath an act of God’s mercy.

The Pharisees had taken a gift from God, a day of rest and worship, and turned it into a burden.

Praise God for His gifts.