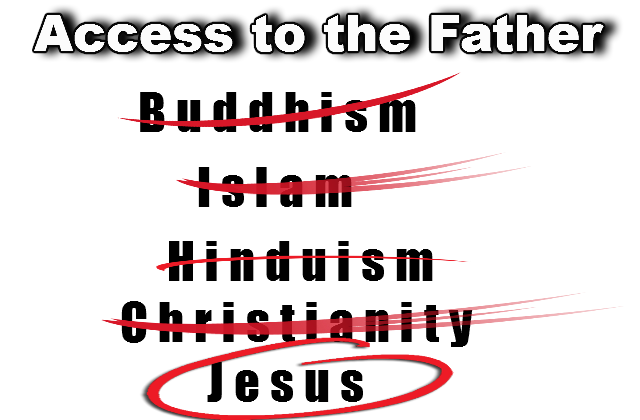 “Let not your hearts be troubled. Believe in God; believe also in me. In my Father’s house are many rooms. If it were not so, would I have told you that I go to prepare a place for you? And if I go and prepare a place for you, I will come again and will take you to myself, that where I am you may be also. And you know the way to where I am going.” Thomas said to him, “Lord, we do not know where you are going. How can we know the way?” Jesus said to him, “I am the way, and the truth, and the life. No one comes to the Father except through me. If you had known me, you would have known my Father also. From now on you do know him and have seen him.”

“Truly, truly, I say to you, whoever believes in me will also do the works that I do, and greater works than these will he do because I am going to the Father. Whatever you ask in my name, this I will do, that the Father may be glorified in the Son. If you ask me anything in my name, I will do it.

Christ gives this imperative because the disciples were to soon face temptation. This would be one like no other. They were going to see Christ hanging on a cross. Christ is shoring up their faith. He is preparing them for what was going to happen. It was through faith the disciples were to come through the impending crisis.

We can rest assured that whatever comes our way, Christ has prepared us for it. The Holy Spirit is there to aid us through it.

“No temptation has overtaken you that is not common to man. God is faithful, and he will not let you be tempted beyond your ability, but with the temptation, he will also provide the way of escape, that you may be able to endure it.” (1 Corinthians 10:13)

I see this analogous to a movie where the police accuse a loved one of a great crime. All the evidence points to their loved one’s guilt. But, the family refuses to accept the conclusion of the evidence. They believe in their loved one. At the end of the movie, the loved one is exonerated. But throughout the movie, the family believed. From time to time some wavered. But unfailing faith pulled them through.

But Christ tells the disciples not to worry. Believe in God. Believe in Him. The disciples’ faith will pull them through. Christ wanted them to remain brave and courageous.

It is impossible for us to avoid feelings of despair. We are often shaken. But we must not fall. We must continue to trust God’s word. Believe in God. Believe in Christ.

Christ’ ascension had a purpose. He ascended so there might be an inheritance for all His followers.

That is like the prayers we may pray. “Lord, I am willing to do whatever you ask. I want to obey. I want to please you. Tell me what it is you want me to do. I don’t know. Make it clear.”

Christ’s answer to us is the same as His answer to Thomas. “I am the way, the truth, and the life.” Both we and Thomas know the way. The fact is, we are asking the wrong question or want another answer. Do I marry Susan or Sally? Do I take this new job? What is the right answer in this situation? Those are examples of the wrong question. We think these are important questions. But they have no eternal consequence. The scripture shows the answer. Christ is the answer. Christ is the way.

Christ said He is the way, the truth, and the life. You may have heard some say there are many paths to God. Christ Himself said no one comes to the Father except through Him. He is the one and only way to the Father. There is no other way.

In response to Christ saying, you have seen the Father, Philip said show us the Father. This appears absurd. Philip had God in front of Him. Christ told them He and the Father make up one being. “Believe in God, Believe in Me.” How dense can you be Philip? Christ seems a little exacerbated with Philip. “How can you say, ‘Show us the Father’?”

Philip did not get it. But he shows us ourselves. Every one of the disciples’ fault and shortcomings is ours as well. We claim to seek after God. But when He shows Himself to us we are blind.

Christ made it unambiguous. He and the Father are united. He is in the Father. And the Father is in Him. They are not the same. But they co-exist within each other. The ignorant may try to disclaim the Trinity by saying the word does not exist in the scripture. But there is no doubt it the scripture teaches the Trinity.

Christ refers to His works as proof of what He said. He is not referring to miracles. He is referring to the effect of His teaching. Changing men’s hearts is much greater than filling their bellies. When Jesus said those who believe in Him will do greater works than these. He did not imply His followers would do greater miracles. Christ’s reach with the gospel was limited. It is the church that took the gospel to the world. The church’s work in the power of the Holy Spirit is “greater” than Jesus’ works both in numbers and area.

When we misunderstand Christ’s on doing greater works, we confuse, “Whatever you ask in my name, this I will do.” Christ did not say I will do whatever you ask. That would make us His lord. He did not provide a magic formula for prayers, “In Christ name, Amen.”

To pray in Christ’s name is to identify with Christ’s purpose. His will becomes our will. Often a better answer surprises us. “No” is sometimes the best answer.

Our prayers are to the glory of the Father and Son.