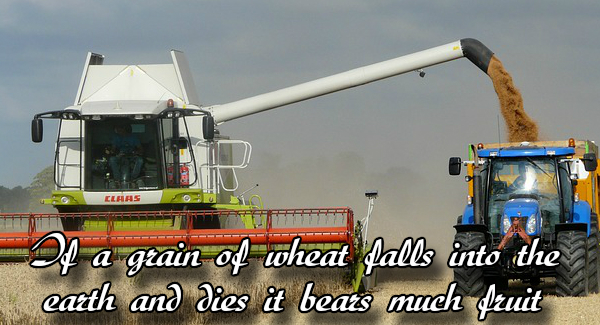 Now among those who went up to worship at the feast were some Greeks. So these came to Philip, who was from Bethsaida in Galilee, and asked him, “Sir, we wish to see Jesus.” Philip went and told Andrew; Andrew and Philip went and told Jesus. And Jesus answered them, “The hour has come for the Son of Man to be glorified. Truly, truly, I say to you, unless a grain of wheat falls into the earth and dies, it remains alone; but if it dies, it bears much fruit. Whoever loves his life loses it, and whoever hates his life in this world will keep it for eternal life. If anyone serves me, he must follow me; and where I am, there will my servant be also. If anyone serves me, the Father will honor him.

Along with the Jews who came to worship were some Greeks. There is some debate about who these Greeks were. Some understand them to be Jews who lived outside Judea. Or they could be God fears, that is, Gentiles who believed in the God of the Jews but were not circumcised. I tend toward the latter but I refuse to be dogmatic about it.

This shows even those outside Judea received Christ as King. The Jesus’ teaching had traveled well beyond Judea to distant countries.

They came to Philip to get an introduction to Jesus. It is not unusual that they came to Philip. Philip is a Greek name. It is probable that Philip had roots or ties outside Judea. That would make Philip a natural point of contact.

Rome uses this to teach that we are to approach Christ through dead saints. This violates so many exegetical principles it is impossible to innumerate them all. First, this text is descriptive, not prescriptive. That is, it describes what happened. It is not a command to behave in this way. Second, Philip was not dead. They asked a live Philip for an introduction. Third, Christ himself tells us to pray to the Father. “Pray then like this: ‘Our Father in heaven…’” (Matthew 6:9a) In short, Rome created a theology and the tried to find verses to support it.

Jesus’ response to the requested meeting is very telling. Several times in John we see Jesus say His hour had not yet come. Now Jesus says His hour had come. The world is coming to Him. The Gospel will spread through the whole world.

Christ used the analogy of planting a seed and it multiplying. Some have taken this in a wooden since and argue for the fallibility of the Bible. Jesus said,”Unless a grain of wheat falls into the earth and dies…” Seeds don’t die when they planted. If we do not allow Jesus to use allegory we come away with bad science and bad theology. Jesus uses the idea of burying and planting. That is analogous to it dying.

Christ compared His death to sowing. Someone who did not understand planting may think to bury food wasteful. But we must plant to produce more food. So, we must not preach only Christ’s death but results of His resurrection.

Christ draws a contrast between life and hatred of life. “Whoever loves his life loses it, and whoever hates his life in this world will keep it for eternal life.” (v25) Christians should be the bravest people on earth. Why? They have nothing to fear. They do not cling to this life. Believers ought to lay down their life with joy. Calvin used this analogy, we are to shake off this life like we would a heavy pack when it inhibits our progress. That does not mean the pack is not useful or its contents are not helpful. But when we need to move with haste the pack becomes a burden.

The more anxious we are about our life, the farther we are from the kingdom of God.

But there are many people who refuse to provide for their own safety. They who rush towards death. In so doing. they show their lack of love for the Kingdom. They are looking for ways to inhibit God using them. We are to let God give and take life.

Christ demands His servants be where He is. We should not refuse to submit to death. We are also to share in his resurrection.