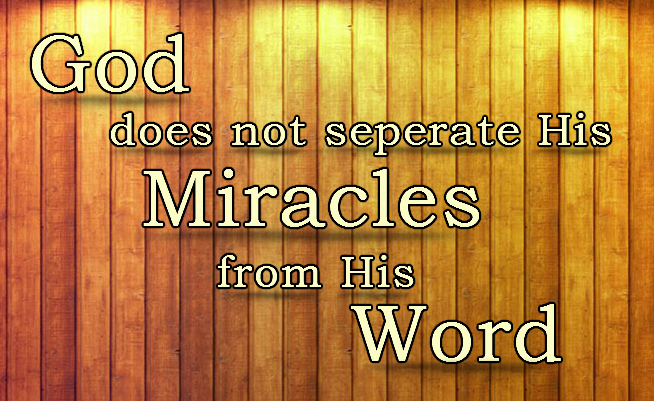 Now many signs and wonders were regularly done among the people by the hands of the apostles. And they were all together in Solomon’s Portico. None of the rest dared join them, but the people held them in high esteem. And more than ever believers were added to the Lord, multitudes of both men and women, so that they even carried out the sick into the streets and laid them on cots and mats, that as Peter came by at least his shadow might fall on some of them. The people also gathered from the towns around Jerusalem, bringing the sick and those afflicted with unclean spirits, and they were all healed.

Miracles are not an end in themselves. Through scripture, we see it is God who performs miracles. He performs them through an individual. God performed them for a purpose. Miracles confirm either the message or the messenger. Here God confirms the apostles’ message. The miracles were to bring people to Christ. God did not separate His miracles from His word.

Solomon’s Portico appears to be the location of the early Christians meeting. It was a covered walkway beside the Court of the Gentiles. It was rows of columns that supported a roof. The side facing the temple complex was open. It was a very public area.

Non-Christians did not join them. This may have been out of fear after what happened to Ananias and his wife. But people held the Christians in high esteem. The number of Christian believers continued to grow. Luke mentions the church grew with both men and women. This could only mean that evangelism occurred outside of the meeting.

Why would they need to have regular meetings? They all had the scripture. They could study it themselves. Why did they need to meet? That is the objection many raise about attending church. They say, “I can worship God by myself.” We dare not be our own teachers. We need each other. We need a community. It is never, “me and my bible.” From the beginning, Christianity has been communal.

It may be hard to find a biblical church. But Christ called us to be His people. Christ did not call us to be His man or woman. This is hard to accept in this individualistic age. It is not every man for himself. But we are to live in a community.

We see the same phenomena here we saw when Christ healed. People craved the healing of their bodies, not their spirits. Their interest was only physical healing. Many believers joined the church. There were many who were not believers in Christ. They were believers in getting healed.

Many laid out their sick on the street so Peter’s shadow would pass over them. Rome abuses this passage. They abuse it to the point of absurdity. They claim if Peter’s shadow could heal why not relics. Touching the bones, grave or garments of Peter should have the same effect. Peter’s shadow did not heal. It was God who healed. Roman, like many pagans, ignore the purpose of miracles. A miracle confirms the message or messenger. They treat a miracle as an end in itself. God never separates miracles from His word.